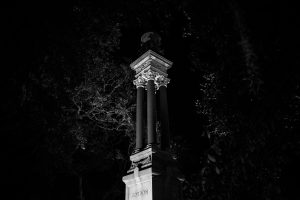 Wright Square was laid out in 1733 with the making of the city of Savannah. It is one of the oldest squares in Savannah. The square was originally named Percival Square, after the man who is believed to have given Georgia its name, Lord Percival.

Thirty years after its making, it was renamed Wright Square for Georgia’s third and most notable royal governor. It has also been commonly called “Court House Square” and “Post Office Square.” In its early days, there was a monument here to the Native American leader Tomochichi. A chief of the Yamacraw tribe, Tomochichi was a great friend to the people of Savannah. He acted as an ambassador to other native tribes, and became close friends with James Oglethorpe who the founder of the colony of Georgia.

Upon Tomochichi’s death in 1739, Oglethorpe ensured that Tomochichi was buried with great respect, in a place of honor at the center of Wright Square. His grave was marked with a pyramid of stones built by the colonists, and remained undisturbed for over a century.

However, in 1883, the grave site was completely destroyed by the Central of Georgia Railroad when they created a monument to their company’s founder. The founder’s own granddaughter, absolutely outraged by the obscene desecration, paid for a new monument to Tomochichi that is still in place in Wright Square.

It is said that if one circles the monument three times and asks, “Where is Tomochichi?” that the ghost of the Yamacraw Chief will whisper in response, “Nowhere,” in reference the desecration and removal of his bones.

One of early Savannah’s more infamous murders saw both perpetrators meet their end in the square. At the time, this served as the city’s gallows. The perpetrators, Richard White and Alice Riley, were poor Irish immigrants in service to a supposedly terrible man by the name of William Wise. No longer able to tolerate their poor treatment, the two strangled him with a neckerchief and drowned the old man in a bucket of water. He was murdered on March 1st, 1734, and it was the first death in the new colony of Savannah.

They were arrested soon after the discovery of Wise’s body. Their trial was held on May 11th, 1734. Then the following year, White managed to escape prison. He was caught by Edward Jenkins and Henry and William Parker. They returned White to prison and he was summarily executed at the gallows. Alice Riley staved off her own hanging, due to the fact that she was pregnant. This was not a pardon for her, but for her unborn child.

The child, a son, was born on January 19, 1735. His mother was hanged hours after giving birth, but went to the gallows insisting upon her innocence. Sadly, her son, James, died two weeks after his mother’s death. Both are buried together on a plot of land near the Square. Legend tells of the Spanish moss in the area refusing to grow at the site of her death. Supposedly, moss does not grow where innocent blood is spilled.

One of the many recorded instances of Alice making herself known is the eyewitness account of Rebecca Aalsburg. She worked as a bank teller in the mid-1990’s, and would often walk through Wright Square on her way home at the end of the day. One foggy winter night in 1996, Rebecca had just finished up a particularly late night when she found herself below the usually tranquil trees. Rebecca felt a sense of unease as she heard a voice suddenly begin calling for help.

A gaunt, redheaded woman stumbled through the fog towards her. She was clearly in great distress, tears streaming down her incredibly pale cheeks. Rebecca was left thunderstruck as the woman begged for help and explained that her baby was lost. Finally coming to her senses, Rebecca moved to help search, but not before noticing several deep and purple bruises all along the woman’s throat. She insisted that she would help find the child, but after a look over her shoulder, she found that the woman was gone.

Concerned, she called the police. The nearest city police cruiser came by, but it was quickly apparent that they had not come to help in the search. The officer explained the story of Alice Riley’s ghost to Rebecca, and how they would receive at least one call every week from someone enlisted to help find the child.

One can only hope that Alice Riley finds her lost child and can finally be at peace in her grave. Until then, be wary of redheads calling for help in the night. Listen for the words of Tomochichi around his monument. Be careful of the things that go bump in the night.