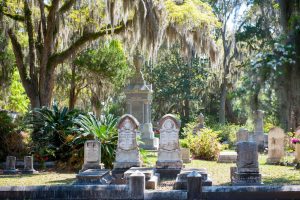 Savannah, Georgia is one of the South’s oldest cities, home to beautiful Antebellum architecture and historic battle sites—as well as a host of paranormal hotspots. From the Revolutionary War to the yellow fever epidemic, Savannah is a city that has experienced a multitude of hardships since its founding in 1733. Many believe these dark events have left a permanent stain on Savannah, manifesting as oftentimes violent hauntings and frequent paranormal activity. From breweries and hotels to battlefields and hospitals, here are the top ten most haunted places in Savannah!

Known as the “Grand Victorian Lady,” the Hamilton-Turner Inn was one of the most luxurious homes in Savannah at the time of its construction (1873). It featured several amenities that were far ahead of its time, such as indoor plumbing, a tin roof, and skylights, and it was the first home in the city to have electricity—installed just four years after Thomas Edison invented the light bulb. Local legend tells us that the residents of Savannah would gather in the street each evening to watch the lights in the house come on, transfixed by the sight.


The mansion is thought to be haunted by several spirits—one believed to be the spirit of a child who died in the home after falling head-first off an upper story landing. Guests in the inn have reported the sound of billiard balls rolling along the floor and footsteps by their beds, and it’s believed that the child spirit is responsible for these mischievous occurrences.

The Marshall House is another of Savannah’s haunted historic inns. The hotel’s reputation as a haunted locale is mostly based on its repeated use as an emergency hospital throughout the decades—once as a Union field hospital during the Civil War, and twice more during Savannah’s yellow fever epidemics. Guests at the Marshall House have reported the sound of children running up and down the halls, seeing shadow figures and apparitions, and witnessing faucets turning on by themselves.

Factor’s Walk is now home to many boutique shops and art galleries, but it has a dark history that belies its charming modern exterior. The walk is known for being the original home of the Cotton Exchange, where industry standard prices for cotton were determined and where many enslaved people were forced to labor. It’s also believed that Factor’s Walk stood witness to the passage of hundreds, if not thousands, of newly arrived slaves who were soon sold into servitude. It’s thought that the anguish of these slaves has left a dark energy imprint on Factor’s Walk, and many people have reported witnessing shadow figures moving along the cobblestone streets at night.

This restaurant and inn are thought to be haunted by several spirits, though the most commonly reported among them is known simply as Anna. Local legend claims that Anna is the spirit of a woman who, heartbroken over ill-fated love, killed herself by leaping off the third-story balcony, though investigators have found it difficult to confirm this theory. Anna, whoever she may be, is blamed for guests’ possessions being rifled through, moved, or even going missing. Other guests claim to have felt someone tugging on their sheets in the night or hearing the sounds of a woman crying.

Occupying a 250-year-old building, the Pirates’ House restaurant is one of Savannah’s most popular eateries as well as one of the most haunted places in the city. It’s believed that the Pirates’ House is possibly the oldest building in the state of Georgia, and around the time of its origin it played host to a seedier cast of characters than the average tourist of today. In the 1700s, a common occurrence in seaport cities such as Savannah was the act of shanghaiing men, or capturing them and forcing them into servitude aboard ships. It’s believed that a tunnel running beneath the Pirates’ House was used to drag unconscious men from the tavern to the nearby dock where they would be sold into servitude.

Although the tunnels have since been collapsed, employees of the Pirates’ House have reported seeing apparitions and shadow figures in the restaurant. It’s also reported that after closing time footsteps can be heard pacing back and forth throughout the restaurant.

Another example of Savannah’s beautiful architecture, the Kehoe House is one of the most luxurious historic inns the city has to offer. Originally built in 1892, the Kehoe House was the private residence of William and Annie Kehoe and their ten children. Additionally, the Kehoe House served as a funeral home for the better part of the twentieth century, which only adds to its aura of mystery and darkness.

It’s believed that two of the Kehoe children died in the home as a result of a careless accident, and their spirits are thought to still roam the mansion. Annie and William Kehoe themselves are also commonly reported apparitions throughout the inn, frequently appearing in room 201 and the mansion’s cupola.

In Savannah’s own version of the Villisca Axe Murders, the Gribble House was the site of the brutal murder of three women in 1909. 70-year-old Eliza Gribble, the owner of the house, was found early one December morning with her skull beaten in, while her daughter Carrie had been similarly brutalized in addition to having her throat slit. The third woman, Maggie Hunter, had been beaten nearly to death and had her throat slit, but she was able to tell police that her estranged husband had committed the crime before she succumbed to her injuries and died. Her husband, JC Hunter, was tried and found guilty of the crime and originally sentenced to death by hanging; however, the court changed the punishment to life in prison just one day before his execution. Amazingly, Hunter was pardoned by the governor of Georgia and released after spending only 12 years in prison.

Perhaps the injustice of Hunter’s release is what has caused the hauntings on the site where the Gribble House stood. The original house was torn down and a garage has since been built in its place, but it’s believed the spirits of the women who were so violently murdered there still make their presence known in the form of shadow figures and poltergeist activity.

As the oldest burial ground in Savannah, Colonial Park Cemetery is thought to be one of the city’s most haunted locations. The cemetery was established in 1750 and is the final resting place of Civil War soldiers, fever victims, and countless victims of violence. The cemetery’s most famous paranormal resident is that of Rene Rondolier, a man who was convicted of murder and believed to have been hanged from a tree in the cemetery. Visitors to the historic site have reported seeing a tall shadow figure skulking through the headstones, and the figure is seen so commonly that the cemetery is known by some as Rene’s Playground.

Built-in 1804, Candler Hospital was Georgia’s first hospital and is the second-oldest continuously operating hospital in the United States. Originally built as a medical facility for sick and wounded seamen, Candler hospital had its mettle tested with the arrival of Savannah’s yellow fever epidemic in 1820.

Yellow fever was one of the most destructive epidemics ever to hit the United States. Spread by mosquito bites, yellow fever laid waste to many seaside cities and swampy regions. In 1820, nearly 700 Savannah citizens died from the disease, including two doctors who were infected while trying to tend to patients.

Old Candler Hospital is said to have a morgue tunnel running beneath its foundation where newly dead patients were carted off to be buried. It’s thought that during the yellow fever epidemic, there were so many people dying each day that the tunnel was piled with fever victims, who were eventually buried in a mass grave. Visitors to the site have reported witnessing apparitions near the tunnel as well as in the courtyard area of the hospital.

The Moon River Brewing Company is considered by many to be the most haunted building in Savannah. Built-in 1821, the structure was originally known as the City Hotel; however, the hotel closed down in 1864 during General William Tecumseh Sherman’s March to the Sea, a Civil War campaign waged by the Union designed to destroy as many Confederate supply lines and resources as possible. The building stood empty for several decades before being partially renovated, though several of the floors still stand as they did nearly 200 years ago.

The Moon River Brewing Company is thought to be haunted by several spirits. Most notorious is that of James Stark, a man who was shot and killed on the premises during a duel in the 1830s. Stark’s spirit is thought to occupy the basement area of the bar, while a spirit known as the “Lady in White” is thought to haunt the unused upper stories of the establishment. Both spirits are thought to be violent, and many employees and patrons of the brewery have reported being physically attacked and shoved by these angry spirits.

Savannah is the oldest city in Georgia and believed by many people to be the most haunted city in the United States! After surviving multiple epidemics, wars, and destructive fires, it’s no wonder so many of the historic sites across the city are thought to be hotbeds of paranormal activity. The next time you’re passing through, be sure to check out some of these top ten most haunted places!