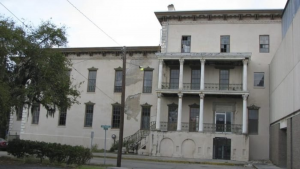 If you live in the state of Georgia, you probably know of several ghost stories and a few haunted places in the Peach State. If you don’t live there and happen to be a fan of all things paranormal, you might want to plan a trip to a state that is rich with history and still has that southern charm even to this day. We’ll be taking a look at the most haunted places in Georgia so you can map out a road trip across the state and learn of the stories of why these places are teeming with ghosts and plenty of paranormal activity. Let’s begin: 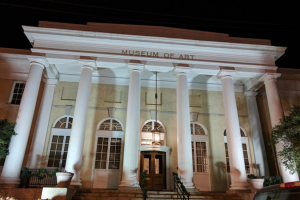 We begin our Georgia ghost journey in Marietta, a suburb of Atlanta. Before this became an art museum, it served as a post office for the city. It is said that a ghost who goes by the name of “Catherine” is said to reside in the gallery. She is said to be one of two full-body spirits that visitors had reported seeing. It was said that some paranormal investigators were sent to check out the museum. After reporting their findings, some of the museum’s staff members were laughing at them as if they were crazy. That’s because their findings were inaccurate. The investigators claimed that there were evil spirits. But the museum staff said otherwise. Catherine and the other mystery specter are anything but evil. 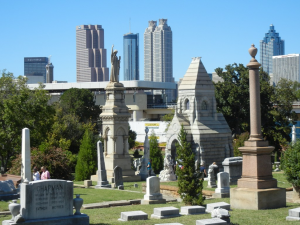 Of course you’re going to find ghosts in a graveyard, right? But some of these historic cemeteries come with a few ghost stories of their own. The Oakland Cemetery is located outside of Atlanta. Many famous Atlanta residents like Maynard Jackson (former civil rights activist and later mayor) and even Margaret Mitchell, the author of the famous novel “Gone With The Wind”. Interred in this cemetery are countless numbers of Confederate soldiers that were killed during the Civil War. It is said that most of the spirits that wander the cemetery were reported to be dressed as Confederate soldiers. Even some of the trees on the cemetery grounds look creepy enough to belong there.

Here’s something you need to know about Georgia’s most haunted places. There are a ton of them in the city of Savannah. But in all fairness, there are plenty of haunted places outside of this coastal city (this is the first, but we have a few others that we’ll cover soon). But we digress. The Old Candler Hospital was a medical facility for Union soldiers and later a mental asylum. So it has seen its share of death and misery in the years of its operation. Rumor has it that an underground tunnel that leads to a morgue is said to still be intact. Plus, with the likelihood of spirits roaming the halls of this nearly 200-year-old building, don’t be shocked if you come across remains from bodies that have never been claimed. 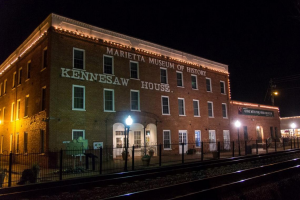 This served as a “breakfast house” for anyone that was traveling and happened to be passing through Marietta. Of course, like most large buildings during the Civil War it became a medical facility. Many Union soldiers were treated here (and of course, there were scores that died of their injuries). Since the post-Civil War era, the Kennesaw House returned to its original roots as a hotel. One such guest reported seeing a vision of what appeared to be a Union soldier being treated by a doctor. Upon reporting it to the front desk clerk, the two went up to the third floor to see that nothing was there. There are plenty of ghosts from both the Union and Confederate side that are popping up all over the southern United States. If you’re a Civil War buff, then odds are you might want to check out this place and also some of the haunted sites that have served as hospitals during that time period.

In 1946, this Atlanta hotel was the site of one of the most devastating hotel fires in American history at that time. In a hotel that was supposed to be “fireproof”, a deadly blaze killed as many as 119 people. Despite the numerous reports of ghost sightings in the rooms and hallways, one other eerie paranormal activity seems to be happening on a regular basis. There are times when the hotel’s fire alarm will go off for no apparent reason. What’s even more scary is that it happens at 2:48 in the morning. It was at that exact time when the fire broke out. If you are looking for a place to stay in Atlanta, a ghost sighting will be closer than you think. And if you hear the fire alarm late at night, you may want to check the time. Talk about a spine chilling experience. 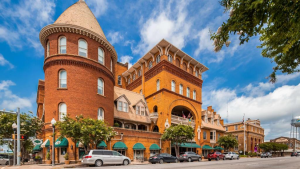 Of course, there are plenty of haunted hotels in Georgia. Do you think the Kennesaw House and the Ellis were the only ones? This one is located in the town of Americus. It was constructed as a hotel for people venturing from the northern United States to stay during the winter months. Over the years, it’s gained a bit of national recognition. It was said that former US president and Georgia native Jimmy Carter was a frequent guest of this hotel. During one of his many stays, did he ever notice anything out of the ordinary? Probably. There had been stories of people hearing laughter in the hallways. Two of the spirits that are known to haunt this hotel are a mother and a daughter that lived in the hotel. The mother was one of the cleaning maids. Both of them were tragically killed when they were pushed down an elevator shaft. Guests have had some uneasy feelings on some of the upper-level floors as soon as they stepped off the elevator. 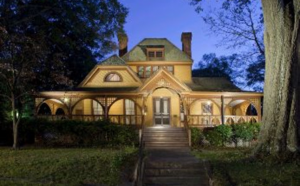 Ever wondered what it was like to hear some ghostly voices on tape? If you ever make a trip to Atlanta, you might want to visit The Wren’s Nest. The home that was owned author Joel Chandler Harris is said to have a few spirits living there. And there appears to be audio proof of it. The Wren’s Nest staff had recorded plenty of audio of someone speaking in a soft, whispering tone. Others have seen the spirit of a woman walking towards the closest of one of the bedrooms. Another paranormal happening occurred when someone was looking in a mirror only to see a man looking right behind them (and disappearing quickly after that). 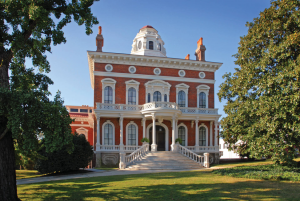 Only two families have lived in this 18,000 square foot home since it’s construction in the 19th century. Today, there is a full-time staff that maintains the property both indoors and outdoors. Yet, there have been plenty of recollections from staff members past and present regarding the paranormal activity. The sight of odd-looking figures and lights flickering on and off at complete random seem to be some of the things that go on during a regular day at the Hay House. Even the doors are locked when they’re not supposed to or opening and shutting whenever they feel like it. 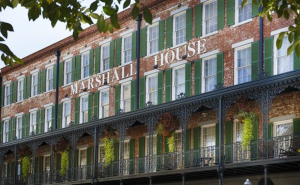 For the final two places, they are located in Savannah. First, we’ll be taking a look at the Marshall House. This hotel was built in 1851 and still stands as one of the oldest hotels in the city. It was built on land that was owned by Gabriel Leaver. Upon his passing, his daughter Mary Marshall, a wealthy businesswoman in her own right, constructed the hotel and kept it in excellent shape. When the Civil War broke out, it became one of a handful of hotels that served as a medical facility for Union soldiers. It was also used once again during the Yellow Fever epidemic that gripped the south and killed hundreds of people in several states. Aside from the countless spirits that wander the halls, rumor had it that amputated limbs were said to be hidden inside some of the floorboards of the hotel. 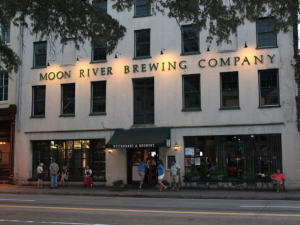 If you are looking for a great place to eat in Savannah, you might want to check out the Moon River Brewing Company. While you’re having a drink and a meal, you do not want to miss out on the opportunity to learn about some of the insanely haunting things that had happened here in the past. Plenty of shootings, hangings, bar fights, you name it. Plus, it was said that the basement area of this establishment is connected to a series of tunnels. These tunnels were used during the days when the slave trade was still alive. Aside from the feelings of being touched and pushed being reported, there had been some sounds of painful moans coming from what was believed to be one of the entrance areas to this hidden tunnel system.