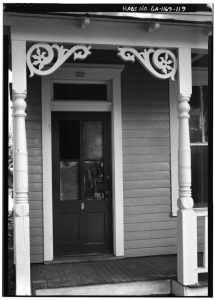 The Willink House is an outlier in Savannah. It’s not a large extravagant mansion. There’s no ornate architecture. The small, white cottage looks more at home in Cape Cod than the Deep South. Yet, this cute little house packs some interesting secrets. The house was once the home of influential shipbuilder Henry Willink, who built some of the Confederacy’s largest, but not always functional, ironclad ships during the Civil War. Willink’s company built the C.S.S. Georgia, which was scoffed at by many, as it was too clunky to put up a real fight despite being armed to the teeth. The C.S.S. Savannah didn’t fare much better. Even through the mistakes, Willink prospered. He worked hard after losing his wife when she fell into the ocean at his shipyard. Willink often saw her ghost while at home, prompting him to randomly storm out of his house and run off to work. Her ghost still haunts the Willink House to this day, as does the spirit of Henry Willink. Neighbors say they still hear the sound of the door slamming shut along with Henry Willink’s phantom footsteps as his ghost takes off toward the shipyard in the dead of night. That’s not all that hides in the Willink House. Rumor has it that the house was once used as a clandestine school for free and enslaved children, run by a White woman named Catharine Deveau. It was illegal for Black children to get an education, as the slaveowners feared that higher learning came with the possibility of a rebellion. The kids were rewarded with candy, helping motivate them to study. Eventually, the school was discovered, and the teacher was forced to flee Savannah. The ghosts of the schoolchildren still inhabit the building, and some say they have seen candy hidden in different areas of the house.

Henry Willink was born to a German immigrant named Frederick Willink, a merchant who had done well by working until becoming wealthy. Willink Sr. had a shipyard, and his son Henry followed in his footsteps. Henry left for New York to learn the tools of the trade, then returned to Savannah in 1851, ready to open his own shipyard. Willink had his house built upon his arrival to the city, and possibly even before, as records indicate the house was dated as early as 1845.

Henry went into business with his associate, Arthur Miller. They named their company Willink & Miller and got to work building large ships. They two became wildly successful, so much so that the Confederacy contracted them to build their ironclads during the Civil War. The Confederates relied on European shipyards to have their largest gunboats built, and so need a domestic shipyard to build ships that could hold their own against the Union. Willink & Miller were sure they could deliver.

Except, they didn’t. Their first gift to the Confederates was the C.S.S. Georgia, also known as the Ladies Gunboat. At a whopping $115,000, equal to over $1.8 million today, one would expect a first-class ship. Unfortunately for the Confederates, the vessel was a clunky mess. The C.S.S. Georgia was so dense with armor and artillery that it just wasn’t practical. They attracted the ire of the public when the ship was seen sailing down the Savannah River. The company launched a PR campaign as damage control, claiming that the ship was meant to function as a floating battery and not a warship. Nobody was buying it.

Deep in the nightmare of their first failure, Willink & Miller were already working on the second ironclad ship for the Confederacy. This time, they were poised to learn from the mistakes of their last project. But they didn’t. The C.S.S. Savannah didn’t do much better. Like its predecessor, it was large, clunky, and difficult to maneuver down the narrow, windy rivers of coastal Georgia. And God forbid you were called to man the Savannah; the interior was hot, humid, and it leaked. Crew members complained that being inside the ship was like standing dead center in the middle of the swamp. The C.S.S. Savannah did provide some use to the Confederates, but they sunk the ship themselves in 1864, presumably to save face in case the Union forces captured the ship and hoped for something useful.

Both the Georgia and the Savannah were both destroyed near the Old Fort Jackson to prevent capture.

Tragedy and Ghosts at the Willink House

The love Henry had for his wife was the driving force behind much of his success. But for Mrs. Willink, it would be Henry’s passion for his work that would be her undoing. Henry loved his career as much as his wife, and he desperately wanted her to see what he spent so much of his time working on, so he egged her to take a trip to the shipyard with him. She agreed, always eager to spend time with her husband.

After arriving at the yard, things were going well. Henry gave his wife a tour around the premises. Suddenly, while climbing up a flight of stairs, Mrs. Willink tripped and fell over the side of a railing, falling into the Savannah River. Henry rushed to save her, but he didn’t make it in time. Mrs. Willink’s skirt and heavy dress weighed her down, and she was unable to swim to safety. She drowned as she fought against the current, leaving Henry Willink devastated, and alone.

In the coming years, Henry worked even harder as he tried to forget the death of his wife. He often saw her ghost in the middle of the night. He would often run out of his house, slamming the door behind him as he ran off to the shipyard. One night, he saw his wife’s ghost again, this time at the yard. She hovered just past the rail where she fell. He reached out to touch her and fell over the rails into the river, just as his wife had a few years earlier. Nearly suffering the same fate, Willink was able to pull himself to safety.

Today, the spirit of Henry Willink lives on. Neighbors say they still hear the sounds of Henry Willink running off to work in the dead of night, hearing the door slam shut and his phantom footsteps running off, even when the house is empty. The ghost of Mrs. Willink is said to be in the house as well, though since the Willink House is privately owned, nobody has actually seen her apparition.

Sometime after Henry Willink sold the home, the house fell into the hands of Catherine Deveau, a White schoolteacher from the West Indies. Sympathetic to the Black cause and their hope for freedom, Ms. Deveau began using her home as a secret school for Black children. She taught math and reading, and motivated the kids to learn by offering them candy if they got the answers correct.

These schools were illegal, education is elevation, and the wealthy landowners didn’t want to run the risk of a rebellion from an educated populace. Mrs. Deveau was running a huge risk if she were to be caught. Eventually, she was found out and forced to leave Savannah. We don’t know what happened to the children, but we can say that they probably suffered a fate much worse than Mrs. Deveau.

Although the location of the Deveau School is heavily disputed, many say they’ve seen the ghosts of the schoolchildren in the Willink House. The apparitions of the studious children have been seen around the house. Pieces of candy have also been found in random places, and some say they’ve seen candy used to spell out math problems on the floor. The spirits of the schoolchildren long for the days spent studying at the Deveau School, so much so that their spirits refuse to leave.

Savannah is known for its haunted houses and long bloody history. The city’s historic district was only recently restored after a prolonged economic depression stemming from World War II. Today, the city is thriving, though gentrification and crime still plague the city’s poor and working class. The Davenport House was among the first houses to be restored and once served as the headquarters of the Historic Savannah Foundation. It’s also haunted by the likes of a curious tabby cat, who follows guests by jumping through the walls of the house. The Owens Thomas House is one of the most active haunted houses in the city, with nearly a dozen ghosts in its midst. Interestingly enough, the building’s slave quarters seem to be protected from the haunts, owing to the Haint Blue ceiling which wards off evil spirits. River Street is Savannah’s waterfront district, and at night the ghosts of the slaves forced to work the docks can be seen late at night. Working the docks was a dangerous task, and many of the slaves were killed after being crushed under the thousand-pound bales of cotton which were hoisted onto the cargo ships. Loving the Deep South? Read up on the top ten most haunted spots in Georgia right here!