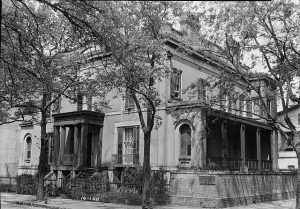 Sitting right on Madison Square is one of Savannah’s most treasured historic houses. Though the city is abound with haunted houses, the Sorrel Weed House is one of the crowd favorites. It’s made cameos in movies and television, from Forrest Gump to the Today Show. The building’s claim to fame is its size, architecture, and of course, the hauntings. The house was the residence of the Sorrel family. Francis Sorrel was a wealthy plantation owner, though his life was marred with tragedy and scandal. After the death of his first wife, Francis married his late wife’s younger sister, Matilda. She then committed suicide after catching Francis in an affair with Molly, one of his slaves. A few weeks later, Molly was also found dead in an apparent suicide. The ghosts of both Molly and Matilda still haunt the house to this day. Visitors have experienced a dark energy in the house and sometimes feel like they’re being choked to death. Others report feeling drowsy upon entering the building. Much of the dark energy comes from the hundreds of dead soldiers who died during the Siege of Savannah, as the bloodiest battles were fought at nearby Madison Square. Some experts say there may be soldiers buried underneath the Sorrel Weed House.

The Sorrels were among Savannah’s most influential families. Francis Sorrel was a West Indian plantation owner who became one of Savannah’s wealthiest men. Francis was born in Saint Domingue, now known as Haiti. A slave revolt forced his family to flee, and the young Francis was saved by slaves who refused to take the life of a young boy. He made a living working the docks in Port-Au-Prince and was eventually transferred by his company to the United States.

Despite being saved by slaves, he himself eventually became a slave trader. Francis and an associate opened up a shipping company in Savannah, where they shipped salt, butter, molasses, cotton, and African slaves. The company grew exponentially, making Sorrel a wealthy man.

Moxley Sorrel was Francis’ son. Moxley fought for the Confederates in the Civil War and rose to the rank of Brigadier General. He fought in the Siege of Fort Pulaski, where Union forces overwhelmed the Confederates and took the fort.

The Sorrel Weed House is among one of Savannah’s most famous buildings, haunted or otherwise. The house was built in 1837 by architect Charles Cluskey. In the mid 20th century, it became one of the earliest homes to be restored in the city’s preservation movement. The Historic Savannah Foundation made the Sorrel Weed House their first public exhibit, which they used to showcase their restoration work. It was also one of the first homes to be made into a historic landmark by the state of Georgia.

The Sorrel Weed House gained fame after making several appearances in movies and television. The building was featured in the opening scene of Forrest Gump. The scene was shot from the roof of the Sorrel Weed House and shows Madison Square and the surrounding vicinity. The house has also appeared on the Today Show, as well as several ghost-themed TV shows, including Ghost Hunters, Ghost Adventures, and Travel Channel’s Most Terrifying Places in America.

Suicides at the Sorrel Weed House

Francis Sorrel married Lucinda Moxley soon after arriving in the United States. Lucinda was from a wealthy family who did business with Francis. Lucinda died just a few years after they married. So Francis, the classy man that he is, then married Lucinda’s younger sister, Matilda.

The two had a happy marriage, but Francis was known for his vices. He began having an affair with one of his slaves, named Molly. Francis even gave Molly her own room just so he can have his affair privately. But it wasn’t enough; Matilda found out about Molly. Distraught and enraged, Matilda committed suicide by jumping off the second-floor balcony. She landed headfirst, cracking her skull open on the floor of the concrete courtyard.

Molly was struck by guilt. Being a slave, she would be held liable for both the affair and the subsequent death. Molly was found hanging by a noose in an apparent suicide.

The Siege of Savannah and the Soldier’s Burial Ground

The Sorrel Weed House sits on Madison Square. The area was the site of a vicious battle during the American Revolutionary War, known as the Siege of Savannah. Joint American and French forces attempted to push the British out of Savannah, who had taken the city just a year earlier.

The Revolutionary Army was both outmanned and outgunned. Bodies were piling up fast. The Revolutionaries dug a trench at Madison Square to bury their dead. Hundred of soldiers died in the span of a few weeks. In the heat of battle, the dead and injured couldn’t be differentiated. Sick and injured soldiers were thrown into the pit with the dead and were often buried alive.

After the battle, the bodies were never exhumed. The city continued to expand around the old battlefield. Madison Square and the surrounding areas were built in the 1830s, fifty years after the war. Many of the buildings, including the Sorrel Weed House, are built over the remains of the dead soldiers.

The Haunts of the Sorrel Weed House

The ghosts of Molly and Matilda still haunt the Sorrel Weed House. Visitors have seen dark silhouettes walking through the halls. Some have captured photos of their spirits. Others claim to have seen the reflection of female apparitions in the mirror, without the physical bodies to accompany them.

The ghost of Molly is said to haunt the slave quarters. A man once rented the space to use as an office and was unaware of the history. He claimed to constantly feel a sense of uneasiness, as if he was constantly being watched. Others who’ve entered the room claim to feel sick or drowsy upon entering the slave quarters. Some even say they feel like their being strangled by a rope, which could be a residual memory of Molly’s death.

Some have claimed to hear the sounds of a social gathering in the living room of the house. The sounds suddenly stop when someone approaches. The source of the sounds has yet to be found, though it’s believed that the phantom gathering is a residual from one of the many socials hosted by the building’s wealthy occupants.

Some say they feel a dark psychic energy upon entering the house. The dark energy is said to stem from the bodies buried at the Siege of Savannah, as a similar aura hangs over Madison Square as well. The dark feeling is often accompanied by the sounds of warfare, which can be heard during especially quiet nights.

Savannah has seen its fair share of blood, sweat, and tears. But despite the endless stories of bloodshed and vicious battles fought in and around the city, it was the slaves who suffered the most. African people were taken from their homes and brought to Savannah, being unloaded at the docks on River Street. In turn, they were forced to work the docks, loading the same ships that brought them to America. Other’s were sold just a block away on Factor’s Walk, where merchants would buy and sell their wares. Today, River Street and Factor’s Walk are known to be some of the most haunted places in Savannah. At night, one can hear the sounds of captured slaves begging for freedom, along with the sounds of the rattling chains that held them captive. The Owens Thomas House is home to the oldest surviving urban slave quarters in the country. About a dozen ghosts reside in the building, making it one of the most haunted houses in Savannah. Despite the heavy spiritual presence, the slave quarters remain untouched by the paranormal. This can be attributed to the Haint Blue paint on the ceiling, which is said to repel evil spirits and ghosts. Want to learn more about haunted Savannah? Read up on the top ten most haunted spots in the city right here!