The Spirits at 12 West Oglethorpe 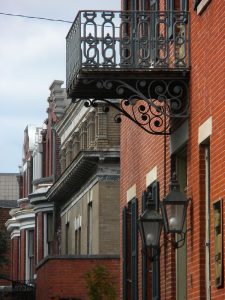 Just around the corner from Wright Square is a mansion that has sat abandoned for nearly 40 years. The house at 12 West Oglethorpe has definitely seen better days. It was the childhood home of Juliette Gordon Low, the founder of the Girl’s Scouts. It later served as a meeting spot for the Savannah chapter of a masonic fraternity, then later became a performing arts school. The building was abandoned in 1985, and ghost stories have been swirling around ever since. One legend tells the tale of a doctor who was using the house as a place to treat patients of Yellow Fever. The doctor committed suicide after losing his wife and child to the disease. Today, tourists report seeing the apparition of the doctor standing in the windows of the house. Many claim to have captured photos of the doctor’s ghost. Tourists on guided tours also say they’ve gotten sick when merely walking up to the house. Those affected say they felt the symptoms of Yellow Fever when they got too close to the building, and the symptoms subsided as they retreated and walked away. Paranormal investigators who have entered the home have seen shadow people, heard disembodied voices, and had their electronics malfunction. Temperature readings taken in the basement often result in readings of 66.6 degrees. In 2009, a few pranksters started a fire behind the building. After firefighters put out the blaze, a few of them claimed to have seen a ghost in the room where the doctor allegedly died.

The Hazy Beginnings of 12 West Oglethorpe

It’s unclear as to when the first building was built on 12 West Oglethorpe. Before the area was developed, it was the site of the city’s first Jewish burial ground. A marker for the cemetery still exists a short walk away, though most of the area has been developed. The house is dated in city records to 1898, but it existed before that. The house was improved upon and renovated the same year it was registered by the city, but a wooden home stood at that address long before.

It is believed that the Gordon family owned the house in the 1860s, after moving there from 10 West Oglethorpe to distance themselves from a family feud. Juliette Gordon Low, who would eventually found the Girl Scouts, was born on 10 West and lived in 12 West for at least a decade or two. It’s unclear as to when exactly the Gordon family moved out.

After being renovated, the house was sold to the Benevolent Protection and Order of Elks, a pseudo-masonic fraternity and social club. The Elk’s Lodge used the building as a meeting place for over 50 years, becoming the building’s longest-running tenant. The order’s initials, B.P.O.E., are still engraved in front of the house to this day. A performing arts school occupied the building for a short while afterward.

The house on 12 West Oglethorpe was abandoned in 1985 and has remained so ever since. In 2009, a few pranksters set a dumpster on fire in the alley just behind the house, causing moderate damage.

Yellow Fever and Legend of the Doctor

In the 1820s, during the last major outbreak of Yellow Fever in Savannah, a doctor was living on 12 West Oglethorpe. He was using his family home to treat patients with the disease. As he brought more and more victims into his home, his family started getting sick. Both his wife and son died shortly after contracting the disease.

The doctor quit his practice and fell into a deep depression. He ended up boarding himself in one of the upstairs bedrooms and refused to leave. After several weeks, the doctor died of starvation.

Many have questioned the truth of this story. First, Yellow Fever doesn’t spread from person to person. It spreads via mosquito bite. So simply having infected patients nearby doesn’t cause one to catch Yellow Fever. Though, given Savannah’s hot summers, it’s possible that the doctor’s family were bitten by mosquitoes. Others say that no doctor ever lived in the house, but instead lived somewhere nearby. They say the ghost stories involving the doctor were later attributed to 12 West Oglethorpe because it sat vacant for so long, and appeared to be the most haunted house on the block.

The Ghosts of 12 West Oglethorpe

The house on 12 West Oglethorpe has sat abandoned for so long that many in the neighborhood believe the place to be haunted even without knowing the history. The facade of the building is in need of maintenance, and a peek through the grimy front window shows an empty and neglected interior. Part of the floor on the upper level is missing. Just a quick glance at the house gives one the impression of a home full of spooky spectres.

The ghost of the doctor is often encountered in the home. They say his spirit stayed in the building to grieve the loss of his family. Many claim to see the doctor standing at the second-floor windows. The interesting part is that the ground on the second floor caved in, meaning the doctor would have to be floating at the windows to be seen. After the fire in 2009, firefighters conducted a walkthrough of the house to check for structural damage. One of the firefighters entered the room where the doctor had locked himself up. The firefighter let out a loud yell, then ran out of the house and locked himself in the fire engine. He never revealed what he saw to his colleagues, but many believe that he encountered the ghost of the doctor.

Tourists who get too close to the house report feeling the symptoms of Yellow Fever. Those who are especially sensitive report a rapid rise in body temperature and overall feeling of uneasiness as they approached the home. The symptoms quickly subside as they move away from the building.

Paranormal experts and historians alike have ventured into the home to search for clues to the truth behind the house on 12 West Oglethorpe. The numerous visits to the home haven’t revealed any new information about the former tenants of the house, but they’ve had plenty of paranormal experiences. One investigator and local tour guide had his camera power down on its own before seeing a three-dimensional shadow person walk directly in front of him, moving from one room to another. He also heard a disembodied voice calling his name from another room. Believing the voice to be one of his colleagues, he followed the voice to an empty room, and his colleague was nowhere to be found.

Many who enter the house have similar tales. Reports of electronics malfunctioning are common. Phones, cameras, and recording equipment have all died or malfunctioned during critical moments, usually during the appearance of ghosts, as if to prevent people from documenting their existence. Some investigators have reported that taking temperature readings in the basement results in readings of 66.6 degrees.

Many believe the building’s proximity to Wright Square, the site of Savannah’s first murder, and home to several ghosts, are the cause of the haunts in 12 West Oglethorpe. This area of Oglethorpe Avenue was also the site of the city’s first Jewish burial ground. The bodies were never moved before the area was paved, and so at least a few thousand bodies remain underground. Perhaps many of the strange events at 12 West Oglethorpe stem from Wright Square and the burial grounds.

Savannah is the most haunted city in America. The city’s spooky reputation can be compared to that of New Orleans and Salem. The city has a long and dark history. From slavery to deadly diseases to countless wars, the streets of Savannah are built on corpses. Quite literally, as much of the city was built over burial grounds of some sort. The largest of them is Yamacraw Bluff, a burial ground for the Muscogee tribe which now encompasses much of Downtown Savannah and the historic district. The haunted house on 432 Abercorn was also built on an old graveyard, which served as a cemetery for the city’s slaves. The slave burial ground is often cited as one of the reasons for the curse on the home. The Pirates House was formerly a botanical garden, but before that, the land was used as a burial ground for the native Yamacraw tribe before they were pushed out of the area by European settlers. Want to learn more about the haunted history of Savannah? Read about the top ten most haunted spots in the city right here!