The Phantoms at Fort McAllister 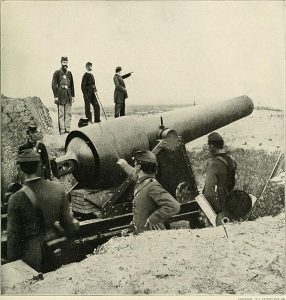 Savannah had three forts guarding its waterways against enemy attacks. The Old Fort Jackson and Fort Pulaski both sit at the mouth of the Savannah River, while Fort McAllister sat about ten miles south of the city, on the banks of the Ogeechee River. Fort McAllister was set apart from its sister forts, not only because of its location but also its construction. While Pulaski and Jackson were brick-and-mortar fortifications, Fort McAllister was made of earth. The earthen walls were able to withstand over seven bombardments from Union ships, only falling when General Sherman arrived during his March to the Sea, taking the fort by land. Beneath the earthen fortifications, Fort McAllister was outfitted with a hospital, officer’s quarters, supplies, seven emplacements, a massive mortar, and stockpiles of guns. After the war, Henry Ford bought the fort and began restoring it with the help of the Georgia Historical Commission. Today, the fort is a museum and part of Fort McAllister State Park. Tourists can stop by and visit the historic fort, but it would be wise to beware of the presence of ghosts. The brutal battles and heavy losses on the part of the Confederates left behind tons of corpses, and their spirits never left the fort. The most encountered ghost is that of a headless soldier named Major Gallie, who was killed in battle. At night, one might hear the sounds of wounded soldiers crying in pain, soldiers yelling out commands, and the sounds of cannon fire in the distance. There’s even the ghost of a cat that lives in the fort. Nobody knows where the feline phantom came from, but it seems perfectly at ease in the fort, despite all the haunts.

Fort McAllister sits on the southern bank of the Ogeechee River, ten miles south of the city of Savannah. The fort was built in 1861 and designed by Captain John McGrady. Shortly after building the fort in 1861, General Robert E. Lee inspected the structure and refortified the earthen walls. This later proved to be a valuable amendment. The fort was built in a sort of spiral, and in the center was a bombproof area that housed a hospital, supply station, barracks, offices for the superiors, and stockpiles of weapons. Fort McAllister was built to house about 230 soldiers, and had seven cannon installations, including one which fired a cannonball called the “red-hot shot.” This cannonball would be glowing red with heat after being fired and could instantaneously set any wooden structure ablaze. There was also a 10-inch mortar set just outside the fort. The recoil from the mortar was so strong that it threatened to shake the dirt off the fortifications, hence its position on the perimeter of Fort McAllister.

The fort’s position on the Ogeechee River made it very difficult for ships to enter or leave the river. The Confederates created mud dams and jetties in the vicinity of the fort. Any ship entering the area would have to slow down to tediously navigate the river while in range of Fort McAllister’s cannons.

The Battles of Fort McAllister

The Union forces weren’t going to retreat that easily. In 1863, the Union returned. This time, it was the USS Montauk that showed up for redemption. The Montauk was an ironclad battleship outfitted with 11-inch and 15-inch cannons, among the largest used in the war. The Montauk also brought several wooden ships for backup. The Union forces came with a few hundred feet of the dams in the river, and the Montauk began shelling Fort McAllister for five hours, landing over 450 strikes on the fort. The Confederates fired back, striking the Montauk 15 times but causing minor damage. The fort sustained some damage, but it was quickly repaired.

The Montauk came back a month later, bombarding Fort McAllister for seven hours. Again, the attack was unsuccessful, except Major John B. Gallie was decapitated by a shell that ricocheted off one of the fort’s cannons. The McAllister landed 48 strikes on the Montauk but again failed to cause serious damage, though the Confederates lost the CSS Nashville. The Montauk then returned a third time, again shelling Fort McAllister for nearly eight hours. The Confederate soldiers had their second unusual casualty when their beloved mascot, Tom Cat, was hit by a stray round while playfully dodging the bombardments to entertain the soldiers, as he usually did. Despite losing their hype man, the soldiers of Fort McAllister were able to hold their position. That was until General Sherman arrived at the Georgia coast on his March to the Sea.

The Fall of Fort McAllister

Like the Old Fort Jackson several miles north, Fort McAllister was built to defend against maritime attacks. It was defenseless against ground-based armies. General Sherman sent General William B. Hazen with a platoon of about 4,000 men to take the fort. The Confederates were vastly outnumbered, having a force of about 230 men. The fort was taken in about 15 minutes in a bloody close-quarters battle that saw lots of hand-to-hand combat. Shortly afterward, the 10,000 soldiers guarding the city of Savannah surrendered to General Sherman’s army, ending the March to the Sea.

The Ghosts of Fort McAllister

The numerous battles and bloodshed at the fort left behind piles of bodies, and the spirits of those men still live within its confines. Tourists and staff have seen shadow people and have had residual memories of the battles fought at Fort McAllister. The battles were bloody, especially the Confederate’s last stand at the fort. It was close-quarters combat. Heads were cracked open with muskets, and many were shot at near point-blank range.

The decapitated ghost of Major Gallie still roams the fort. His frightening appearance has sent many tourists running. He tends to appear next to the cannon where he was decapitated by shrapnel. His appearance is often accompanied by icy cold air, which envelopes the observer. Other wounded soldiers have been seen around the fort. Some are missing an arm, others are laced with bullet wounds, and a few have their heads smashed in.

The ghost of Tom Cat, the Confederate mascot of Fort McAllister, appears as the ghost of a small black cat. Many have seen the phantom feline running through the fort, only to disappear when they try to catch up to it. The cat also tends to rub up against the legs of unsuspecting visitors before vanishing and leaving the tourists with several unanswered questions.

In the 1930s, Henry Ford acquired the fort and sought to restore it to its former appearance. He asked the men doing the restoration work to spend the night in Fort McAllister to prevent looting and vandalism, to which they reluctantly agreed. According to the men, they would hear strange sounds at night, like the sound of mortars firing, soldiers yelling commands, and wounded soldiers begging for help. Many of the men left and never returned.

Savannah’s seen some action, and its streets are covered in blood. Whether it’s from the numerous wars, the Yellow Fever, or slaves being worked to death, the city has a dark past. Check out the secret haunted burial grounds of Savannah! All over the city are graveyards and cemeteries that have long since been paved over and built on. From the Negro Burial Grounds disrespectfully named after pro-Confederate advocates to the old Jewish cemetery, which now sits under Oglethorpe Ave. There’s also the Muscogee burial ground underneath the entire historic district. Learn about the hauntings at River Street! Savannah’s waterfront is a great place to grab some souvenirs, but it’s also home to the ghosts of slaves who were worked to death loading the ships with cotton. Many died of heat exhaustion in the hot sun, or worse, crushed under the weight of thousands of pounds of Savannah’s cash crops. Swing by the house at 432 Abercorn St! Being built on a slave burial site, the house was cursed before it was built. The house was once home to the Wilson family, who suffered a horrible tragedy when the death of Ms. Wilson from Yellow Fever led Mr. Wilson to torture and kill his daughter, then commit suicide. One hundred years later, the house was the sight of a gruesome triple murder. Want to escape the haunts of Savannah? Check out the top ten most haunted spots in Georgia right here!