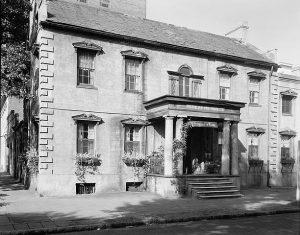 Today, the Olde Pink House is one of Savannah’s many taverns, but for over three hundred years, the bright pink mansion was known as the Habersham House. Sitting on Abercorn Street right on Reynolds Square, the house was built by the influential Habersham family around 1771. The building has been through quite a few hands and has lived through some of Savannah’s worst times. The Habersham House stood strong through a massive fire in 1796, while over 200 other buildings were destroyed. The house also survived three wars and was seized by occupying forces twice. Jim Williams, a leading preservationist in Savannah, helped restore the building in the 1960s. Williams may have brought the house back to life, but that didn’t stop a haunted aura from taking over the building. Several owners of the house kept slaves, many of whom were children. It was common for the children to contract Yellow Fever and die during childhood. The spirits of the slave children still live on in the house, and patrons of the bar have caught a glimpse of their apparitions playing in the basement. They’ve been known to knock down cutlery and lock the bathroom doors. One bartender in particular claims to have had a constant issue with wine bottles jumping out of their cubbies and onto the floor. The ghost of James Habersham Jr. also resides in the house, and is generally seen during the colder months. He tends to be pretty friendly, and most staff encounter him at some point. Mrs. Habersham is said to be in the house as well. Unlike her late husband, she’s pretty mean and often hisses at customers when they cause a ruckus in the restaurant.

James Habersham was one of Savannah’s earliest settlers and among the wealthiest men in Georgia at the time. A fierce British loyalist, he was behind the push to ban slavery in Georgia, despite being a cotton factor who benefitted from it. In fact, Habersham was one of the pioneers of Georgia’s cotton industry and was one of the first men to send Georgia-grown cotton back to England. The British would later become the single largest consumer of American cotton.

Habersham has three sons. Unlike their father, they were staunchly anti-British, which angered Habersham Sr. They all did their part to fight back against the British, eventually joining the Sons of Liberty, a pro-colonial separatist movement. The eldest brother, James Jr., opted not to fight directly. Instead, he used his financial connections to fund the Americans during the Revolutionary War. Joseph was the middle brother and arguably the biggest risktaker. Joseph and a group of other men arrested the Governor, Sir James Wright, at his mansion on Telfair Square. He then joined the military to aid in the fight, as did John, the youngest brother. After the war, James Jr. went on to become the Speaker of the General Assembly of Georgia, then helped to establish the University of Georgia in 1785.

James Habersham had the house built in 1771, but due to the outbreak of the Revolutionary War, construction had to be delayed. The British occupied the home, fueling the young Habersham children’s angst against the British. The house wasn’t officially completed until 1789. Just ten years later, James Habersham died in the house, leaving the home to his eldest son, James Habersham Jr. Several of the Habersham’s slaves also died in the house, many of whom were children. They often fell victim to Yellow Fever, which swept through the city multiple times. Slaves were usually kept in the basement when they weren’t being forced to work.

Being made of brick, the Habersham House survived the Savannah Fire of 1796. While over 200 buildings in the city burned to the ground, the building’s brick construction saved it from suffering the fate of Savannah’s mostly wooden structures. In 1812, the building became a branch of Planter’s Bank, the first bank in Georgia. During the Civil War, the house fell under siege once again. Union troops used the home as a barracks when they occupied the city in 1864. Surprisingly, the troops caused minimal damage to the home.

After the Civil War, the Habersham House went through several different owners. It served as an attorney’s office, bookstore, and tea house.

Strangely enough, the bright pink color of the Habersham House was an accident. The Habershams originally intended the house to be white. The house was built with red bricks, which were overlayed with white plaster. The rain, heat, and humidity caused the bricks to bleed through the paint, giving the house a pinkish color. The strange quirk caused the Habershams to become the subject of much ridicule. They were forced to continually repaint the house white to restore the intended color. But their efforts were futile. The color constantly bled through. Finally, in 1920, one of the later owners decided to permanently paint the house pink, settling the matter once and for all.

Jim Williams bought and restored the house in the 50s and 60s. The house was then further restored by another restoration team in 1970, intending to open a restaurant. The Olde Pink House restaurant and tavern opened to the public in 1971. The establishment remains one of the most highly rated restaurants in Savannah today.

Ghosts of the Olde Pink House

The Habersham House, now the Olde Pink House, is chockful of ghosts. But with over three centuries of history, how could it not be? James Habersham died in the house, and so did several of his slaves. Also, many of the workers and servants from the building’s various functions have stuck around for the long term. The tight, dimly lit spaces of the building’s taverns provide the perfect backdrop for the hauntings. Very few guests escape unscathed.

The basement serves as the wine cellar of the Olde Pink House. This is also where many of the slaves were kept. The ghosts of the enslaved children who died of Yellow Fever can still be occasionally seen in the basement. They tend to be quite playful and a bit mischievous. Some have seen groups of children running around out of the corner of their eye. The children had a long-running gag with one of the bar managers, who complained that bottles of wine would pop up out of their cubbies and fall to the floor, shattering on impact. She blamed the ghosts for the recurring problem, as there’s no possible way for the wine to jump off the shelf. The children are also known to play pranks on patrons who use the basement bathroom, locking the stalls and bathroom doors with guests still inside.

The ghost of James Habersham Sr. also resides in the Olde Pink House. Habersham died in the house in 1799, and his spirit never left. While the official story is that he died of natural causes, some say that he committed suicide after learning of his wife’s infidelity. The story was said to be covered up to protect his reputation, as those who commit suicide can’t be buried on church grounds. Habersham is generally a friendly spirit, often seen around the restaurant but mostly staying out of the way. Most of the staff encounter his ghost at some point. Sometimes he orders drinks from the bar but disappears before he has a chance to drink them.

Mrs. Habersham lives in the Olde Pink House as well, though she’s much less friendly than her husband. She appreciates her personal space and is known to hiss as people who encroach on her territory. God forbid a guest encounters her in the ladies’ room. She’s been known to loudly yell at women who enter the restroom while she’s there, shaking the doors while screaming “GET OUT!”, in an effort to scare them away.

The spirit of a young woman has been seen on the second floor. She’s heard sobbing late at night after the restaurant clears out. Nobody knows who she is, but many suspect that she may be a slave or servant who worked in the Habersham House at one point. Some have seen swirls of energy on the second floor as well. Whether or not the two phenomena are related is unknown.

Savannah is one of the old cities of the Deep South, along with New Orleans and Saint Augustine. Unsurprisingly, all three cities are known for their haunts. Many of the haunted houses around Savannah have been around for over two hundred years. The Pirates House is one of the oldest buildings in the city, built in 1794. The building served as a tavern for sailors and pirates stopping over during long voyages. Today, the ghosts of the sailors can be seen giving the old stink eye from the second floor. The Owens Thomas House was built in 1816. It’s home to the oldest surviving urban slave quarters in the country. The house is one of the most paranormally active in the city, being home to at least a dozen ghosts. The Olde Harbor Inn was built in 1812 as a warehouse for cotton, slaves, and oil. Today, the building is a haunted hotel, still playing host to a spirit who died during a deadly fire in 1892. Want to escape the haunts of Savannah? Check out the most haunted spots in Georgia right here!