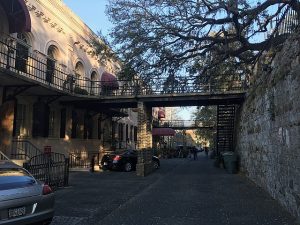 River Street is the place to be in Savannah. Shops, restaurants, and boutiques line the old cobblestone streets. But if we go back a few hundred years, we’ll see a very different scene. African slaves being shuffled into the stone tunnels to be sold on Factor’s Walk. Slaves and immigrant workers breaking their backs to load up idling cargo ships with cotton. Thieves, drunks, and low-lives hanging around the alleys waiting for their next victim. The same buildings that served as warehouses to store cotton and slaves are now hotels, cafes, and offices. Among them is the Olde Harbor Inn, one of the oldest hotels in Savannah’s historic district. The building was originally used as a dockside warehouse before being demolished and rebuilt as the headquarters of an oil company. The building mysteriously caught fire in 1892, and many suspect that the blaze was the work of a disgruntled employee named Hank. He perished in the fire, but his spirit resides in the building to this day. The building was rebuilt shortly afterward and housed a clothing factory until the late 80s when it was rebranded as a luxury hotel named the Olde Harbor Inn. Hank’s spirit still lives in the inn to this day, and he’s known to be quite the prankster. He’s been blamed for missing personal belongings, random objects flying around the room, and alarm clocks going off early in the morning. Some guests say he’ll even get into bed and take a nap alongside you. The kitchen staff also feel some of Hank’s wrath. Chef’s in the Olde Harbor Inn’s restaurant claim that he turns off and unplugs appliances during the busy hours. Entire plates of food have gone missing. Turns out that Hank is quite the foodie!

River Street is nice now, but boy, it was a bad place back in the 1800s. Like many port cities, the docks were crime-infested. Alcoholism, thievery, pick pocking, and brawls were common. The docks brought in slaves and exported cotton. Slaves who were recently taken from Africa would arrive in droves and were shuffled into the warehouses and alleyways before being sold on Factor’s Walk. Many died of malnourishment, disease, and heatstroke. Some of the slaves were put to work on the docks alongside German and Irish immigrants, many of whom were indentured servants. Many died while working and were either crushed under the weight of the massive bales of cotton or were worked to death until succumbing to exhaustion.

The warehouses which line River Street were used to store cotton and slaves before and after being packed into ships. Many of the buildings still have the metal latch to which the slaves were attached. The Olde Harbor Inn site was first constructed in 1812 by the Johnson and Jones families. The buildings were used as storage until about 1890 when the buildings were demolished to make way for a mega warehouse. This new three-story building would serve as the primary headquarters for the Tide Water Oil Company.

As was the norm at the time, the buildings were made of wood. It was a cheap and easy choice for building material, but the threat of fire was always looming. Given Murphy’s Law, it was only a matter of time. In 1892, just two years after the building was constructed, a fire broke out on the east end of Factor’s Walk. The strong breeze helped the fire spread, and within minutes the entire city block was shrouded in a massive inferno. It didn’t help that 500 barrels of oil were being stored inside the building at the time. Try as they could, firefighters couldn’t put out the fire; it had grown too big. By the time the fire subsided, the building was completely destroyed.

The fire was one of many in Savannah, and so, city leaders passed an ordinance that required all new buildings to be made out of brick. The warehouse was rebuilt, requiring over 700,000 bricks to complete. Not only was the warehouse now flame-resistant, but the building was also revered as a marvel of construction at the time. Shortly after, the Rockafeller Oil Trust took over Tidewater and moved into the building, occupying it until 1907. They were known for selling a high-grade of kerosene, which they called Guardian Oil. The building then served as a denim factory, manufacturing blue jeans and overalls for the Alexander Brothers Company until 1980.

The Olde Harbor Inn is Born

While the Savannah Historic District was undergoing a majestic revitalization, HLC Hotels bought the property and began renovations in 1985. The Olde Harbor Inn opened for business in 1987, and today it’s the premiere luxury hotel on Savannah’s riverfront. The inn is noted for being one of the few pet-friendly hotels in the city, and in the evenings, they deliver free ice cream straight to your doorstep.

Ghosts of the Olde Harbor Inn

The resident ghost of the Olde Harbor Inn is a mischievous spirit named Hank. Nobody knows who Hank was in life, but they do have a hunch. Apparently, Hank was the only casualty of the fire in 1892. Not only was he killed in the fire, some even say that he actually started the fire. The blaze started near his office, and Hank had gotten into a nasty argument with his bosses earlier in the day. Many suspect that he started the fire in an ill-fated attempt at revenge. Though no casualties were actually recorded, many believe that he was actually the only fatality of the blaze. When the ghost began to appear after the building was rebuilt, nobody knew who he was, so they affectionately named him Hank.

Today, Hank is well-known amongst the staff and guests of the Olde Harbor Inn. Despite the hotel prohibiting smoking indoors, many say they smell the aroma of cigar smoke when his ghost appears, and many report seeing a mysterious man smoking a cigar around the hotel. He’s also known to move things around when the guests aren’t looking and throw coins around the room randomly in an attempt to spook the guests.

Hank is also known to overstep his boundaries with the ladies. Female guests have claimed to wake up to the apparition of a strange man appearing in their rooms and cozying up to them in bed. Upon waking up startled, and feeling violated, they find nobody there.

Hank seems to appear mostly in rooms 405 and 406. Nobody knows why he chooses these rooms in particular, but he seems to like these the most. Staff encourage guests looking for a thrill to book either of these rooms to raise the chances of encountering the mysterious ghost. One staff member ended up spending the night in room 405 after a late-night shift and heard strange banging noises against the wall and the sound of someone jiggling her doorknob. The alarm clock in the room next door went off in the middle of the night, and she knew that room hadn’t been booked in weeks. Hank was clearly trying to get to her, but as an experienced staff member, she brushed it off and slept through the night. She had long grown accustomed to Hank’s haunts.

Hank is also known to inhabit the kitchen as well. Despite the lack of a need for ghosts to eat food, Hank seems to have an affinity for good grub. He likes to hang out by the hot food bar, where he can take in the aroma of fresh pastries. He likes to play pranks on the chef and is often blamed for unplugged and malfunctioning appliances. Sometimes entire dishes even go missing.

The Olde Harbor Inn is owned by HLC Hotels, which also own a number of other haunted hotels around the city. The East Bay Inn is another recently renovated building that was repurposed as a hotel. And like Hank, the East Bay Inn’s ghost is known to pull a few pranks on the guests. The ghost of Charlie has been accused of stealing, spying on, and spooking the guests of the East Bay Inn. The Marshall House is one of the oldest buildings in the city. Now a hotel, the building once served as a medical facility for Union soldiers during the Civil War. Many of the soldiers who died in the building still haunt the hotel to this day, and sometimes, one can even catch a whiff of rotting flesh, still charred from the battlefield. The Kehoe House was once the private residence of the Kehoe Family and their ten children. Two of them passed away, and their ghosts still live on. Those who spend the night report seeing the residual memories of children playing around the house. Looking for a spooky place to spend the night? Check out the top ten most haunted hotels in Savannah right here!