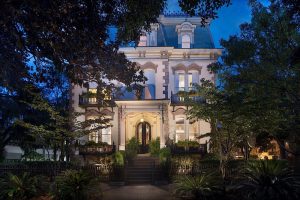 When you go on vacation, a hotel and lodging are usually just a means to an end. Rarely do you recount to friends your adventures at the local chain hotel with its lukewarm complimentary breakfast and scratchy sheets. But what if your hotel wasn’t just a place to crash but instead was one of the highlights of your trip?

There are hundreds of reasons to visit Savannah, Georgia, but one of its main selling points is its notorious paranormal activity. Savannah is a town with a rich history and a host of haunted hotspots, with roots reaching back to the early 1700s. Among its many haunted sites are a legion of haunted hotels, inns, and bed and breakfasts. Want to take your vacation to the next level? The next time you’re planning a trip to Savannah, consider staying in one of these haunted hotels!

A prime example of Savannah’s beautiful architecture, the Kehoe House is one of the most luxurious historic inns the city has to offer. Originally built in 1892, the Kehoe House was the private residence of William and Annie Kehoe and their ten children. Additionally, the Kehoe House served as a funeral home for the better part of the twentieth century, which only adds to its aura of mystery and darkness.

It’s believed that two of the Kehoe children died in the home as a result of a careless accident, and their spirits are thought to still roam the mansion. Annie and William Kehoe themselves are also commonly reported apparitions throughout the inn, frequently appearing in room 201 and the mansion’s cupola.

Built-in 1896 by the widow of an Irish immigrant, the Foley House Inn was Savannah’s first bed and breakfast. Honoria Foley, the owner of the Inn, and her five children lived peacefully in the Foley House for several decades until it passed into new hands. During renovations nearly a century after the Inn was built, workers made a gruesome discovery in the historic home. Wedged behind one of the walls of the Foley House was a badly decomposed skeleton. Many people believe the body belonged to a wealthy lodger who’d mysteriously disappeared decades earlier.

Though the skeleton’s identity has never been confirmed, the workers’ discovery seems to have caused a paranormal disturbance in the home. Guests at the Inn have reported seeing the figure of a man in a top hat walking through the gardens late at night. Others have felt a strange gust of wind in the rooms and halls of the hotel despite the windows being sealed shut. Staff at the Inn refer to the spirit as “Wally” in honor of the nature of his discovery.

The Marshall House is another of Savannah’s haunted historic inns. The hotel’s reputation as a haunted locale is mostly based on its repeated use as an emergency hospital throughout the decades—once as a Union field hospital during the Civil War, and twice more during Savannah’s yellow fever epidemics.

Yellow fever was one of the most destructive epidemics ever to hit the United States. Spread by mosquito bites, yellow fever laid waste to many seaside cities and swampy regions. In 1820, nearly 700 Savannah citizens died from the disease. It’s thought that the Marshall House’s repeated brushes with death have cast a certain paranormal gloom over the inn, and guests at the Marshall House have reported the sound of children running up and down the halls, seeing shadow figures and apparitions, and witnessing faucets turning on by themselves.

Built around the Civil War era, the East Bay Inn has served a variety of purposes in its centuries-long history, ranging from hosting cotton warehouses and merchant offices to serving as the headquarters of the Colombia Drug Company. For several decades, though, the building stood empty as the economy struggled to maintain itself. In the 1980s, the building was renovated and transformed into the East Bay Inn.

Like the Foley House Inn, the East Bay Inn also has a resident ghost that the staff is all familiar with. Affectionately named “Charlie,” the spirit thought to haunt the East Bay Inn is commonly spotted walking the halls of the building dressed in a dark suit and top hat. Guests have reported hearing footsteps in the halls at night as well as having the doorknob of their rooms jiggled by an unseen force. Though the cause of the hauntings at the East Bay Inn is unclear, it seems universally acknowledged that it’s one of the most paranormally active hotels in the city!

Known as the “Grand Victorian Lady,” the Hamilton-Turner Inn was one of the most luxurious homes in Savannah at the time of its construction (1873). It featured several amenities that were far ahead of its time, such as indoor plumbing, a tin roof, and skylights, and it was the first home in the city to have electricity—installed just four years after Thomas Edison invented the light bulb. Local legend tells us that the residents of Savannah would gather in the street each evening to watch the lights in the house come on, transfixed by the sight.

The mansion is thought to be haunted by several spirits—one believed to be the spirit of a child who died in the home after falling head-first off an upper story landing. Guests in the inn have reported the sound of billiard balls rolling along the floor and footsteps by their beds, and it’s believed that the child spirit is responsible for these mischievous occurrences.

Built-in 1847, the Eliza Thompson House was one of the finest private homes in Savannah. Home to Eliza and Joseph Thompson as well as their seven children, the historic inn served as a private residence for many years. The Eliza Thompson House is thought to be one of the more paranormally active inns of Savannah, with several paranormal investigation teams declaring the site to be haunted by several spirits.

Guests have reported witnessing the apparition of a Confederate soldier in the upper story windows as well as a young woman dressed in white wandering the halls. Room 132 is thought to be particularly haunted, with guests reporting the sound of children’s laughter as well as the sensation of someone—or something—sitting on the edge of the bed. Not for the fainthearted, the Eliza Thompson House is a must-see for any daring paranormal enthusiast!

This restaurant and inn are thought to be haunted by several spirits, though the most commonly reported among them is known simply as Anna. Local legend claims that Anna is the spirit of a woman who, heartbroken over ill-fated love, killed herself by leaping off the third-story balcony, though investigators have found it difficult to confirm this theory. Anna, whoever she may be, is blamed for guests’ possessions being rifled through, moved, or even going missing. Other guests claim to have felt someone tugging on their sheets in the night or hearing the sounds of a woman crying.

A trip to die for…

Savannah is thought by many to be America’s most haunted city. Beneath its thriving arts scene and southern charm, the city is built on centuries of gruesome history, and its many paranormal hotspots reflect this dark past. If you’re ever on a trip through the Deep South, Savannah is a must-see stop. Consider staying a night in one of these haunted hotels and inns for a trip you’ll never forget!

Want to learn more about Savannah’s haunted sites? Click here to read about the most haunted places in the city!