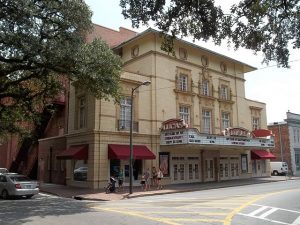 The Lucas Theatre attracts the patrons of the arts in Savannah, hosting musicals, plays, and concerts. Now owned and operated by SCAD, theatre magnate Arthur Melville Lucas initially built the theatre in 1921. Despite have built over 40 theatres across the country, only the Lucas Theatre bears his name. The theatre hosted primetime movie premiers, and also served as a community center for the people of Savannah. After falling into disrepair after World War 2, the Lucas Theatre underwent a dramatic revitalization, raising millions to bring the theatre back to life. Today, the Savannah Film Festival is one of the many events hosted by the theatre. Patrons and staff might also encounter the occasional ghost, like strange shadow people that can be seen around the theatre stage. There is also a phantom audience, as staff claim to hear applause coming from the main theatre room when it’s empty. The ghost of a box office worker shot in a drive-by is also present in the lobby. He can occasionally be seen stumbling into the lobby with a gunshot wound in his back.

Who was Arthur Lucas?

Before we get to the theatre, it’s essential to know about Arthur Melville Lucas, the man behind the Lucas Theatre. Arthur was born in Florence, South Carolina, and lived in Atlanta for most of his life. Still, he loved the city of Savannah and kept ties with the city through family, friends, and his various businesses. He was a jack of all trades, taking on numerous roles during his lifetime. In 1917, he bought the Time Recorder newspaper in Americus, Georgia, then sold it five years later. In 1919, he took a seat at the Board of Directors for the Exchange Bank of Savannah and was also a contract agency for the Georgia Telephone and Telegraph Company. Arthur also ran a Ford dealership and renovated the Levy Department Store, which is now the SCAD Jen library.

Despite having a wide array of interests, Arthur’s true passion was the arts. He got into show business in 1907, taking high-level positions in several large motion picture companies. He managed Savannah’s Grand Theatre and the Washington Film Exchange in Washington D.C. He supervised the distribution operations of the Mutual Film Corporation, then worked for the Triangle Film Corporation, where he oversaw the company’s operations in the South and West. He then managed the Atlanta-New Orleans division of Metro-Goldwyn Mayer.

Arthur moved from managing theatres to building them in 1920, after becoming president of the American Theatres Corporation and taking over movie theatre operations in the South. He set his sights on Savannah, taking on the functions of the Odeon and Folly Theatres with the help of his company. He had begun planning his big move; building the Lucas Theatre. Arthur would come to build over 40 theatres across the country, though the Lucas was the only theatre to be named after him.

History of the Lucas Theatre

The Lucas Theatre opened its doors in December of 1921 after two years of construction. The theatre cost $500,000 to build, equivalent to about $7.4 million today. The silent film era was still in effect. The theatre opened with two silent films; Buster Keaton’s comedy short, Hard Luck, and Camille, a drama starring Rudolph Valentino and Alla Nazimova. The premiere helped propel Valentino’s career, as he went on to star in The Four Horsemen of the Apocalypse, the first film to gross over $1 million. The premiere also attracted prominent Savannah politicians, business people, and socialites, who were awed at the theatre’s Spanish Baroque architecture.

Though the premiere was well-received, Arthur rushed the grand opening. The Lucas Theatre had much work to be done. Several parts of the theatre had gone unfinished, and some plans had yet to be realized. In 1926, an air-conditioner was added to the theatre. The Lucas Theatre became the first building in Savannah to have “man-made weather,” a luxury that wouldn’t become widespread for another thirty years.

Arthur used the theatre to keep ties with Savannah, even when he was gone. He made the Lucas Theatre a community space where people can gather for purposes other than the fine arts. He handed out tickets to the theatre to newborn babies and sent letters to his employees who were drafted during World War 2.

After the war, Savannah experienced an economic downturn. Attendance slowly declined, and the Lucas Theatre was forced to close in 1976. Just three days later, the ABC Southeastern Theatres, the owners of the Lucas Theatre, petitioned the Savannah Historic Foundation to tear the building down. They declined, but ABC persisted for the next ten years, planning to turn the now-historic theatre into a parking lot. Finally, in 1987, a non-profit dedicated to saving the theatre was formed. The Lucas Theatre for the Arts began raising capital to restore the theatre.

The restoration didn’t start until 1995 when money started pouring in from film and theatre enthusiasts. In 1997, the release of Midnight in the Garden of Good and Evil spurred tourism in the city. Director Clint Eastwood held the release party at the Lucas Theatre, which attracted tons of donors, including a generous $200,000 donation from Kevin Spacey.

The Lucas Theatre reopened in December of 2000, almost 88 years to the day of the original opening. Shortly afterward, SCAD took over the theatre operations and offered financial support. The Lucas Theatre is now a major destination for performers touring the South and hosting major events like the Savannah Film Festival, the Savannah Music Festival, and the Savannah Philharmonic.

The Spirits of the Lucas Theatre

Like many theatres across the country and the world, the Lucas Theatre has a few spirits floating around. The ghosts tend to come out when the theatre’s empty. Many report seeing shadow people around the building, especially on stage. Others have heard the sounds of applause when the theatre’s empty. Theatre staff have also reported a strong sense of being watched, or even preyed upon when they’re working in some of the darker corners of the theatre.

Workers and staff working on the renovations witnessed some strange paranormal phenomena as they upgraded the building. Some reported hearing the sounds of the projector whirring from the ceiling, even though it had been removed. Other workers claim to have seen the apparitions of early 20th-century theatre patrons walking the halls.

In 1928, a large crowd was waiting to enter the Lucas Theatre for a grand premiere. Just as the line started moving, a group of gangsters drove up to the theatre and opened fire on the crowd with their Tommy guns. While most of the crowd were spared, the ticket taker was shot in the back while trying to escape.

Many say they see his ghost at the theatre entrance. Those who encounter his ghost usually do when they open the front door to the theatre lobby, and the man stumbles in, wounded, then falls onto the ground and disappears.

Many dispute the story’s authenticity, while others point to a repair job to cover up the bullet holes on the building’s facade as evidence of the shootout. Whether or not it’s true, it’s an interesting tale, and quite a few people claim to have seen the ghost of the wounded box office worker.

There’s a lot to do and see in Savannah, whether you’re dead or alive. If you’re alive, you can do some sightseeing, hit up a history museum, or grab a bite to eat. If you’re dead…well, you can probably still do all of these things because the ghosts in Savannah are everywhere. River Street is right up against the Savannah River and hosts shops, hotels, and restaurants. You might also see the spirits of the African slave workers loading the boats with cotton. And most of those buildings against the water were used as warehouses to keep the slaves who had just been imported from Africa. Remember that when you stop to grab a bite at one of the many restaurants in the area! The historic Savannah Theatre is another place where the dead mingle with the living. The living might want to catch a musical or play in the oldest operating theatre in the country. The dead might hang out with the ghost of Betty, an aspiring actress who was killed in a fire in 1827, which was one of the theatre’s many disasters. The museum at the Old Fort Jackson is an excellent place for history enthusiasts, where one can see a cheesy reenactment of the Civil War. You might catch the ghost of the clumsy Private Garrity, who died after a murder attempt when he smashed his superior in the back of his head with a musket. Want to learn more about Savannah’s haunted history? Check out the top ten most haunted spots in Savannah right here!