The Legend of 432 Abercorn Street 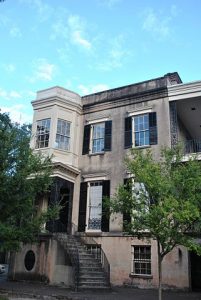 In a city full of haunted houses, few have seen more haunts than the house on 432 Abercorn Street. The house is surrounded by terrifying legends, from being built on a slave burial ground to being the site of several murders. Though some say the stories are exaggerated, others say there’s plenty of truth to the legends. One of the tales is the tragic story of Benjamin Wilson and his family. Wilson was a Civil War veteran who wished to become a Savannah socialite after the war. After moving into 432 Abercorn in 1869, Wilson’s wife died of Yellow Fever. His sadness and despair from his loss caused him to become a bitter man, and he took his anger out on his daughter. He would punish her by denying her meals and locking her in an empty room. After seeing his daughter playing with some of the Black children from down the street, he became enraged. He left her locked and bound in the second-floor room during a heatwave, leading to her death several days later. Realizing his terrible mistake, he became incredibly distraught. The ghost of his daughter tormented him in his sleep, and he eventually killed himself. About 100 years later, a story of a triple murder shocked the community, when three young girls were found brutally murdered, with their organs removed and their bodies contorted to make a triangle. The house on 432 Abercorn is privately owned, and while nobody knows who the current owner is, there are rumors that they may actually be the leader of a Satanic cult, who feed on the dark energy of the house and use it for their rituals. The house isn’t open to the public, though many venture near the house hoping to see ghosts.

Before the house on 432 Abercorn was built, the land around Abercorn Street was used as a slave burial site. As it turns out, many places in and around Savannah were built on slave and Native American burial sites. It’s not a surprise, considering that the city of Savannah was built on the backs of slaves, that their houses would literally be built on their graves too.

Benjamin Wilson was a Civil War veteran. The South lost, but Wilson survived and was determined to gain influence in Savannah. Wilson, his wife, and his daughter all lived in the house. The Wilsons were living in the house for just a few months when Mrs. Wilson fell ill with Yellow Fever. She didn’t make it. Mr. Wilson was devastated. Already a harsh man from the combat of the Civil War, he fell into a deep depression. But not wanting to break his strong image, he bottled up his emotions. Unfortunately, he took his anger out on his daughter.

Wilson began to dish out cruel and unusual punishments when she disobeyed or to spoke back to him. He would spank her, refuse her meals, and lock her in an empty room. One day, she went out to play with some of the other children in the neighborhood. Mr. Wilson went out to check on his daughter and saw that she was playing with some of the Black kids from the orphanage few blocks over. He brought her inside and scolded her harshly, believing that his daughter was too good to be friends with children of color. She didn’t heed his warning. The next day, she went and played with them again. Mr. Wilson was fuming.

He wanted to punish her in a way that would send a message to her friends; that they were not to associate with his daughter. He took her to a room on the second floor and tied her to her chair by her ankles and wrists. He left her in front of the window for the children of the neighborhood to see. She kicked, screamed, and begged for mercy, but to no avail. Mr. Wilson wasn’t letting her go, and the children were unable to help her.

Wilson left her bound for days during one of the worst heat waves Savannah’s ever seen. It didn’t take long for Benjamin Wilson’s daughter to succumb to the heat. By the time Wilson came to release his child a few days later, she had long since passed away. Wilson panicked. He untied his daughter, and her lifeless body fell into his arms.

The crime went unpunished. Wilson had become too influential in Savannah for the police to take him in. The crime was swept under the rug. But Wilson wasn’t forgiven. The ghost of his daughter was still out for revenge. She tormented her father and haunted him in his sleep. The ghost followed him around the house, often making an appearance in the second-floor room where she died. She was determined to drive her father mad.

It didn’t take long for Wilson to break down. A week after his daughter’s murder, Wilson grabbed his revolver and sat down in the chair where he murdered his daughter and shot himself in the head as he looked through the window.

Sometime in the 1950s and 60s, a small family was living at 432 Abercorn. A husband, wife, and their two daughters lived happily in the house. One holiday season, they invited their family friends to stay in the house during the winter break, who also had two daughters. Throughout their vacation, the adults went out to enjoy the town while the four girls stayed home watching TV and playing board games.

The two families were having a grand time. On the last night of their vacation, the adults stayed out longer than usual, celebrating their final night out. They came home to find three of the girls brutally murdered, and one hiding in the closet, shaking with fear. The girls were found sliced open with their organs removed. Their bodies had been twisted into the shape of a triangle, which lead some to believe that the Illuminati committed the murder.

To this day, the murders remain unsolved, further shrouding the house at 432 Abercorn in mystery.

The House at 432 Abercorn Today

The house at 432 Abercorn is a private residence, though it attracts tons of tourists and ghost hunters hoping to catch a glimpse of the paranormal. The owners aren’t particularly well-known, which has lead to rumors about who they might be. Some say the house is owned by the young girl who survived the triple murder. Others say the house is owned by the leader of the East Coast chapter of the Church of Satan. He uses the house for Satanic rituals, feeding off the dark energy. The disappearance of a student from SCAD who stayed at 432 Abercorn is said to be evidence of the rumor. Apparently, he was a sacrifice for a Satanic ritual.

Of course, the truth is that the current owners are private people who aren’t particularly fond of the fanfare around their home.

Savannah is one of the oldest cities in America. It’s also one of the most haunted, often compared to other haunted cities like Salem and New Orleans. Thinking about coming down to Savannah? Spend a night at the East Bay Inn! This renovated hotel was once a cotton warehouse during the Civil War era. Today, the building is haunted by a friendly ghost named Charlie. He tends to hang out in Room 325, but he’s also been known to wander around the hotel, peeking into guest rooms looking for things to steal. Grab a meal at the Pirate’s House! This restaurant is one of the oldest buildings in Savannah, and patrons are likely to encounter the ghosts of the old sailors who still reside in the building. Passersby have even seen the spirits looking out of the windows. Take a stroll down Factor’s Walk, named for the cotton factors, or salespeople, of Old Savannah. Factor’s Walk is where you’ll find the city’s art galleries, cafes, and boutiques. The area is known for its sealed-off stone tunnels that once lead to different parts of the city. Visitors have heard cries for help coming from the tunnels, and many have seen the apparition of a tall shadowy figure at night. They say the voices crying out from the tunnels are the spirits of slaves who were sold on Factor’s Walk. While you’re here, you should also check out the top ten most haunted spots in Savannah!