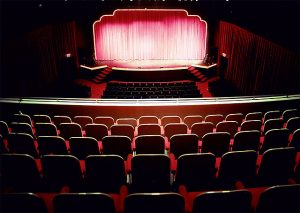 Theatres tend to attract ghosts, spirits, and all sorts of paranormal phenomena. The Savannah Theatre is definitely not an exception. The theatre is the longest continually operating theatre in the country, first opening in 1818. After 200 years of history, quite a few spirits have become attached to the Savannah Theatre. At least three ghosts live in the theatre, though there may be many more. One is an actress named Betty, who was said to have died when the theatre caught fire in 1827. She tends to appear on opening nights, either on stage or hiding behind the curtains. The ghost of a young boy named Ben is often seen on the balcony. He usually bothers the technicians who work the spotlight, offering to lend a hand. He’s also known to play tricks on the audience members. The third ghost belongs to the theatre’s old director. He was a passionate soul, having a deep love for the arts. Staff members have heard the director yelling orders to the performers from high up in the balcony. Staff and audience members have reported having strange paranormal experiences in the hallways, dressing rooms, and on stage. Local police have reported hearing audience applause and commotion from the theatre late at night when it’s supposed to be empty. Though the theatre is one of Savannah’s best venues for the performing arts, there’s still an aura of mystery surrounding the ghostly tales in the Savannah Theatre.

History of the Savannah Theatre

The Savannah Theatre opened its doors in December of 1818 with a performance of The Soldier’s Daughter. The building was designed by a British architect named William Jay, who also designed other historic buildings around Savannah. The first twenty years of the theatre were rocky. The seats weren’t filling up, and the theatre was auctioned off twice and changed hands several times. In 1838, the theatre was bought by a large stock company. They were able to run the theatre in a profitable manner and still bring in a crowd. The theatre finally saw success.

The theatre became a pivotal point in American history when Alexander H. Stephens delivered his Cornerstone Address in the theatre in 1861, just a few weeks before the outbreak of the Civil War. Stephens used the Cornerstone Address to define white supremacy as the “cornerstone” of American ideals, hence the name of the speech. Stephens also declared slavery a necessity and stated that the subordination and inferiority of Blacks is one of the foundations of the United States. The Cornerstone Address drew more support for the secession of the Confederacy from the United States. Just a few short weeks afterward, the Confederate Army attacked Fort Sumter, the first act of the Civil War.

Over the course of the 18th century, countless shows were performed at the Savannah Theatre. A slew of well-known performers graced the theatre stage through the years. Oscar Wilde, W.C. Fields, Fanny Davenport, and E.H. Sothern, to name a few. Edwin Booth was also a repeat performer at the theatre, playing several Shakespearean roles. Edwin Booth was the older brother of John Wilkes Booth, the man who assassinated President Lincoln. John was also a theatre actor, though it’s unknown if he ever performed in the Savannah Theatre. Many speculate that John Wilkes Booth performed in at least one Shakespearean play alongside his brother.

Tragedy, Destruction, and a Deadly Curse

Throughout its 200 year existence, at least four disasters have threatened the life of the Savannah Theatre. In 1827, the theatre caught fire for the first time. The theatre didn’t sustain much damage, as only the stage caught fire. A few people were killed, including an actress.

In August of 1898, a massive hurricane swept through Savannah. Homes were destroyed, streets were flooded, and trees were ripped from the ground. The Savannah Theatre took a beating. The roof was torn off, and the auditorium was flooded. Then, just a few years later, flames engulfed the theatre. The building had to be completely remodeled. The elaborate facade initially designed by William Jay was replaced by a dull brick face. Still, audiences kept coming back.

In 1948, another fire raged in the Savannah Theatre. This time, it threatened to burn the whole building down. Much of the building was lost, though the building was rebuilt in the Art Deco style, which was popular at the time. The theatre was rebranded as a movie theatre upon reopening. According to some, the 1948 fire was caused by a curse. When the Savannah Theatre was under construction, a man placed a penny inside one of the walls. The penny was later found during a renovation and given to the theatre owner as a good luck charm. The day before the fire, the owner lost the penny on a trip to New York, leading some to believe the penny was actually part of a curse imposed on the theatre.

Ghosts of the Savannah Theatre

With over 200 years of history in one of America’s most haunted cities, it would be wrong to expect the Savannah Theatre to not have a ghost or two roaming around. Then there’s another golden rule to be observed here; theatres are always haunted! We don’t know why, but we know that every theatre has a ghost story. Some say that it’s because ghosts love the arts. Maybe the tragedy of life as a ghost forces them to seek out a form of self-expression. Whatever the reason is, we know the Savannah Theatre has at least three ghosts, all of which were said to have died in the theatre.

Betty is the ghost of an actress. She died during the fire of 1827 when she was trapped underneath the stage and suffocated due to smoke inhalation. Apparently, her real name was Elizabeth, but over the years, her ghost became known as Betty. She was passionate about acting, and she never gave up on her passion, even in the afterlife. Her favorite spot is on the stage. She’s most often seen on the opening night for new plays and performances. She either appears briefly on stage or hides backstage just behind the curtains. Many have reported seeing Betty hanging backstage in costume as if she were prepared for her next performance.

Ben is the ghost of a young boy who died in the 1948 fire. Ben was seated on the balcony when the fire broke out. The attendees on the balcony were all directed to a particular exit, which was too small for the volume of people trying to escape. Poor Ben was caught in a crowd of desperate people, who then trampled him to death. Ben’s ghost is now eternally tied to the theatre balcony, where he sat shortly before his death. He is especially attracted to the technicians high towards the back of the theatre. Ben likes to bother the person who handles the spotlight, tugging on their pants and asking if he can help. He enjoys playing pranks as well. He often rigs the equipment to malfunction to get a rise out of the technicians, and is known to harass audience members by pulling their hair and tugging on their clothes.

The ghost of one of the early theatre directors lives on the balcony near the exit. Passionate about the arts, the director can often be heard shouting exclamations and orders at the performers during rehearsals. “BRAVO! ENCORE!” Sometimes the performers will hear a single slow clap. Since the spot where the director sits is invisible from the stage and right next to the exit, the theatre staff thought that someone was sneaking in and taking a peek at the rehearsal. After numerous security checks and interrupted rehearsals, the staff realized that whoever is yelling at the performers had already been in the theatre for a long time. After some research, the theatre staff learned that one of the theatre directors died of a heart attack while on the job.

Theatre staff and patrons have experienced all sorts of paranormal occurrences in the Savannah Theatre. The first haunting around the theatre was reported in 1895 when local police would hear applause and performances from the theatre late at night when the building was empty. On another occasion, a group of female performers were forced out of the dressing room when they all had a strong collective feeling of being watched. The women fled the dressing room before suiting up, refusing to return until the matter was solved.

Savannah is a beautiful city. The signature Spanish Moss hanging from the Oak trees is a mark of Southern heritage. But the city also has a dark past. Slavery, wars, pandemics, all of which helped create one of the most haunted cities in the country. Take a stroll through the spooky Laurel Grove Cemetery! The cemetery is segregated, the south side is reserved for Blacks while the north is reserved for Whites. Both sides of the cemetery are equally haunted, with visitors reporting having been followed by phantom footsteps. Some have even seen disembodied hands crawl out from behind the headstones. Visit the house on 432 Abercorn Street! The house is often called one of the most haunted houses in Savannah after a horrifying family tragedy followed by a brutal triple murder. Check out the Mercer House! A crime of passion and an accidental death left behind three ghosts in this beautiful home-turned-museum. Don’t forget to check out the top ten most haunted spots in Savannah right here!