The Haunts of the East Bay Inn 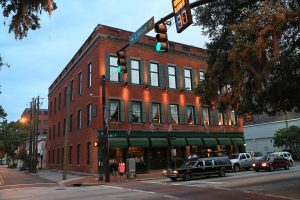 The East Bay Inn sits in the middle of Savannah’s historic district. It attracts guests with its exposed brick walls and its proximity to the waterfront and downtown. But guests also come for the haunts! The East Bay Inn is a known haunted hotspot in Savannah, and guests often claim to have come face to face with some strange spirits. Charlie is the hotel’s resident ghost. He was a former worker who died when he fell from the third-story window. He still haunts Room 325 to this day. Guests often report seeing Charlie around the halls, wearing a black suit and staring off into the distance before fading away. Some also claim that he walks the halls at night jiggling the doorknobs to the guest rooms. Guest claim to hear phantom footsteps at night, along with flickering lights and disappearing objects. None of this is a surprise, considering the age of the hotel. Like many buildings in Savannah, the Easy Bay Inn can trace its history back to the days of slavery and the Civil War Era. The original building was built in 1854 by Edward Paddleford. The East Bay Inn first served as a warehouse and administrative office for Georgia’s cotton industry. In the 1920s it became the headquarters of the Columbia Drug Company. After sitting vacant for two decades, the building was renovated and reopened as the East Bay Inn. Today, the hotel is one of the historic district’s famous landmarks and attracts tourists who come for the city’s history, as well as those who just want to encounter a few ghosts.

The land where the East Bay Inn now stands was first given to Mr. John Tucker in September of 1762 when the Crown of England granted him the land. Over the course of the next century, the land went through several owners who all used the land for different purposes, mainly farming. In June of 1852, the property was bought by Edward Paddleford, who then began building what would become the East Bay Inn.

The building was originally a cotton warehouse. Several different cotton merchants held their offices in the building. Savannah was a major cotton producer and exporter, and the industry was the source of the city’s wealth. But behind Savannah’s cotton empire was the dark reality of slavery. The city wouldn’t have been a global exporter of cotton had it not been for the backbreaking forced labor that upheld its plantations.

After the Civil War, cotton offices began to vacate. A steam bakery and several foreign consulates moved in, as did a grocery warehouse. The third floor hosted a meeting hall for local lodges and fraternities, like the Freemasons. By 1910, the last of the cotton-based tenants moved out. In 1920, the building was bought out by the Columbia Drug Company, a chain of local drug stores. They became the building’s longest-running tenant, utilizing the building until 1965.

The building was abandoned after the Columbia Drug Company moved out in the 1960s. Over the next twenty years, the building remained vacant. Much of Downtown Savannah’s historic district was vacant during that time. In the 1970s, developers planned to raze many of the city’s historic buildings. They wanted to build commercial centers to compete with the suburbs and satellite cities popping up all over Georgia. Locals were angered, feeling as if their city would lose its sense of identity. In an attempt to preserve Savannah’s history, they pushed back against the big-time developers, and won. Their successes helped create Savannah’s historic district.

Abandoned buildings were reinhabited and renovated. Tourism began to flourish in Savannah. In 1983, the building that Mr. Paddleford built over 180 years prior was once again bought out and renovated. The East Bay Inn was born.

Today, the East Bay Inn is one of Savannah’s luxury historic hotels. It has 28 guest rooms, a bar with daily happy hours, a restaurant, and an elegantly decorated interior. The brick walls are visible from the inside, as are the cast-iron columns. The hotel is just a short walk away from downtown Savannah, the Riverwalk, and SCAD.

Since the hotel is so old, it’s lacking many of the comforts you would expect in a high-end hotel. The exposed brick walls make the rooms a bit chilly during the winter, and the walls also absorb heat during the summer. The floors are quite creaky, often making noise at night. Its proximity to the Riverwalk also makes for quite a ruckus at night, especially during the weekends. Still, guests have no problem trading comfort for the hotel’s historic, and haunted, experience.

Ghosts of the East Bay Inn

Savannah is one of the most haunted cities in the country, rubbing shoulders with New Orleans, Boston, Salem, and the often understated state of Arizona. Just about every building in the historic district is haunted, and the East Bay Inn is no exception.

The hotel’s main resident ghost is a man named Charlie. Charlie used to work in the East Bay Inn, though it’s unknown when exactly he used to work there. The story goes that Charlie was cleaning up in Room 325, when he fell through the window, plunging three stories to his death. Ever since, Charlie’s ghost has haunted the halls of the hotel. Charlie’s spirit is a bit mischievous. He’s been known to sneak into guest rooms and steal personal belongings.

Guests claim that Charlie walks up and down the halls at night, his slow and heavy footsteps causing the floorboards to make creak. He jiggles the doors to the guest rooms, presumably looking for open rooms so he can take things from the guests. Many have had their belongings taken by Charlie. One guest had a single shoe taken from him, while the remaining shoe was found with a penny lodged in the shoelaces, presumably as a cheeky metaphor for the guest’s “penny loafers.”

Charlie has often been seen in person. He usually wears a black suit and a tophat. Guests say that he stares off into space, seeming like a normal guest at first glance, though bizarrely dressed, until he fades away and vanishes into thin air. It’s not until he disappears that those who witness him realize that he’s actually a ghost. He’s most often seen in Room 325, and guests claim that the lights flicker right before and after his appearance.

Charlie is an overall friendly ghost, and despite his penchant for taking things, he doesn’t have any bad or evil intentions. Still, if the thought of encountering a ghost scares you, then stay away from Room 325!

Savannah’s one of the old cities of the South. Its prosperity came from its many rice, indigo, and cotton plantations, which were all upheld by institutionalized slavery. Savannah’s historic downtown remains mostly untouched since the 19th century, and the ghosts and spirits that inhabit the historic city haven’t left. If you’re looking for another haunted hotel, book a room at the Hamilton Turner Inn. The hotel made an appearance in the acclaimed novel Midnight in the Garden of Good and Evil, a book that helped spur tourism in the city. The inn is known for phantom gunshots, strange occurrences, several ghostly residents. The Gribble House was the site of a grisly triple murder, where an elderly woman along with her daughter and acquaintance were found dead on a cold December morning. The house is said to be home to at least 20 spirits. Wright Square is one of the oldest town squares in Savannah, built during the early days when the city was still being laid out. The area is known to be where one can summon the spirit of Tomochochi, a Yamacraw chieftain who took a lead role in the city’s early history. The square was also the scene of a brutal murder in the 1700s, when two Irishmen strangled their evil boss to death. Before you make your next trip, make sure to read up on the top ten most haunted spots in Savannah right here!