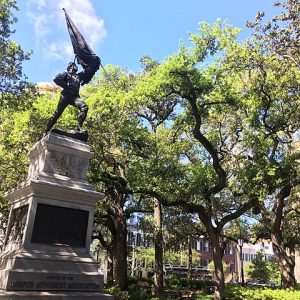 During the Revolutionary War, two major battles were fought in Savannah. Both were equally bloody, and the area around what would become Madison Square saw heavy casualties. It’s even rumored that the area was the burial site for the dead soldiers, except some of those soldiers weren’t dead. The wounded and sick were thrown into the pits and buried while still alive. Today, Madison Square is pretty peaceful. If it weren’t for the statue of William Jasper, one would never know that a major battle took place there. Students from SCAD hang out around Madison Square, studying and socializing, almost entirely oblivious to the hundreds of bodies buried several meters below their feet. Well, we can be sure that some of them know, because if they were ever to visit Madison Square at night, they would surely have had a few…encounters. Strange shadowy spectres haunt the town square after dark, and they aren’t too subtle about showing themselves either. The most frightening ghost is that of an all-black shadowy figure who has been spotted darting around the park at an unusually high speed. Nobody has seen it up close; it disappears when approached. Those who’ve caught a glimpse say the ghost is solid black with no features and resembles the silhouette of a tall man. Other supernatural phenomena reported at the park include disembodied voices and whispers, apparitions watching from nearby houses, cold spots, and lights appearing in the sky.

The American Revolution & the Siege of Savannah

During the American Revolution, the British invaded and captured the city of Savannah. The Americans fought back, but they were outnumbered and outgunned. The South was particularly rebellious, so they held Savannah as a strategy to keep a stronghold in Georgia and appeal to loyalist sentiment. The British also used Savannah as a base to conduct raids along the southern coast.

One year later, the Americans struck back. A joint French-American army attempted to push the British out of Savannah. The battle was particularly bloody, with French and American forces taking heavy losses. The area around present-day Madison Square was where the Americans were holding their ground. They had a pit nearby to bury their dead soldiers. The Revolutionary Army lost over 250 men to the 40 lost by the British, and the battle lasted just a few weeks. The bodies piled up quickly. Wounded and sick soldiers were also thrown into the pit if they were presumed dead. There was no time to differentiate in the heat of battle.

In the end, the British won again. The siege was the greatest British victory of the war, in part because of the heavy losses undertaken by the Revolutionary Army compared to the relatively light casualties on the British side. London celebrated the news, and the city held a short festival when word of the victory arrived. But while the Brits may have won the battle, the Americans won the war. The city of Savannah, along with other occupied territories, was ceded to the newly formed United States upon victory.

Madison Square was built in 1837, along with adjacent Pulaski and Lafayette Squares. It was part of the final waves of squares to be built. The square was named for James Madison, the fourth president of the US. In the vicinity of Madison Square, one can find the Sorrel-Weed House and the Green-Meldrim House, both of which are known to be haunted. St. John’s Episcopal Church is right up against the square as well. The church uses the Green-Meldrim as their parish house. The main campus of SCAD is also on Madison Square. Students frequent the area, using it as a relaxing green space to study, socialize, and get some exercise.

In the center of the square sits the statue of William Jasper. Jasper is considered a war hero, dying while raising the banner of his regiment. He was mortally wounded while raising the flag and fought back his impending demise until he was able to properly honor his fellow soldiers. American architect William Doyle sculpted the statue to commemorate Jasper in 1888. Madison Square is often called Jasper Square by locals.

Madison Square is quaint during the daytime. Like any public park, you’ll find picnics, people taking a stroll, and tourists snapping photos. But at night, the vibe in Madison Square changes dramatically. One begins to have the strange feeling that they’re being watched. An unusually cold wind might blow during the mid-summer. Some have said they’ve spotted lightning in the sky on completely clear nights. There have been reports of ghostly apparitions staring from the houses nearby. These aren’t your regular run-of-the-mill haunts, even in a city like Savannah. It becomes quite obvious that Madison Square has some extra spook.

The most daunting experiences in Madison Square are the shadow people. Many simply see them out of the corner of their eye, and they can easily be mistaken for a bird, raccoon, or other creature that might be roaming around late at night. But it soon becomes apparent that these entities follow their victims around the square. There’s one in particular that can get uncomfortably close, though it usually vanishes once approached. Like the rest of the shadow people, he’s all black and has no distinguishable features. He resembles the silhouette of an unusually tall man, though nobody can pinpoint who he might be or when he was likely to be alive.

While nobody knows who the shadow people might be or what they represent, the dark energy of Madison Square can be traced back to the Siege of Savannah. Hundreds of men died, many of which were buried at Madison Square. Living soldiers were thrown in the mass grave as well, as the wounded and sick couldn’t be differentiated from the dead. So much suffering and death must have created a spiritual vortex, causing all manners of supernatural events to occur.

If you think you can get away from the shadow people by running to one of the nearby houses, well, you’d be right, but that doesn’t mean something else won’t get you. The buildings nearby are haunted too, and excavators have found several bodies left over from the war while building their foundations.

The Sorrel-Weed House was the home of a wealthy merchant named Francis Sorrel. Despite being a family man, Sorrel became enamored by one of his slaves, named Molly. The two had an affair until Mrs. Sorrel found out. Devastated by her husband’s infidelity, she lept from the second-story balcony and died upon landing. Just a few short weeks later, Molly was found hanging in her room. The ghosts of the two women still haunt the house to this day.

The Green-Meldrim House is home to several spirits. Strangely enough, they seem to appear when one plays music in the house. Things move around randomly, doors open and close on their own, and voices echo through the house. The ghosts can be traced back to a slave who would always stop what they were doing to watch the musical events which were often hosted at the house.

St. John’s Episcopal Church is said to be haunted as well. Choir members claim to have been pushed from behind by an unseen force while performing. The maintenance staff at the church say that a dark energy seems to be guarding the church’s bells. The strange feeling is usually accompanied by the sighting of a woman in an all-black Victorian dress.

Savannah is full of ghosts, secrets, and strange happenings. After over three centuries of history, including three wars and the brutality of slavery, the city has built quite a dark reputation. Today, Savannah has lightened up a bit, but the haunts remain. There’s no shortage of spooky encounters. Fort Jackson is one of Savannah’s three forts, which created a perimeter around the city and held through the Civil War. General Sherman finally took the city by land in 1864. The fort was the site of a brutal attempted murder when a private attempted to bludgeon his superior to death. The clumsy private died in the process, but his ghost lives on, haunting those who visit the Old Fort Jackson. The house on 432 Abercorn Street was cursed from the beginning, being built over a slave burial ground. A horrible family tragedy took place in the house when a man unleashed a brutal punishment on his daughter, which ultimately took her life. He then shot himself out of guilt. One hundred years later, a gruesome triple murder occurred in the house. The Laurel Grove Cemetery was once Savannah’s main burial site. The graveyard is segregated, with Blacks buried in the south and Whites in the north. But the ghosts in Laurel Grove don’t see color; they’ll follow you all over the cemetery. The spookiest ghost in Laurel Grove is that of a disembodied hand that reaches out from behind the grave, trying to grab its next victim. Want to see more haunted Savannah? Check out the top ten most haunted spots in the city right here!