The Haunted Houses on Columbia Square 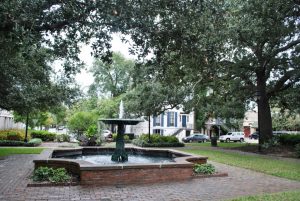 James Oglethorpe had a master plan for the city, which included a street grid, green spaces, and urban gardens. This was known as the Oglethorpe Plan. For the most part, city builders stuck with it, and today, Savannah owes some of its charm to the layout. The city has 22 town squares, and Columbia Square is one of them. The area around Colombia Square was known as Eastern Commons during the 18th and 19th centuries. It was a predominantly Irish neighborhood known for its seedy bars and bordello houses. Today, Columbia Square is home to three of the city’s most haunted houses; the Davenport House, the Kehoe House, and the 17Hundred90 Inn. The ghosts of a tabby cat, an Irish servant named Anna, and two of the Kehoe children are known to haunt the immediate area. Colombia Square is also known for being the birthplace of Savannah’s historic preservation movement. The Davenport House was slated for demolition in the 1950s until seven women banded together and saved the house from destruction, kickstarting the Historic Savannah Foundation. The square itself was almost demolished when developers wanted to knock it down in favor of a larger thoroughfare. The Abraham Sheftall House, the current headquarters of the Historic Savannah Foundation, is also on Columbia Square.

The town squares around Savannah were built in waves, being laid out according to the Oglethorpe Plan as the city expanded outwards from the river. Columbia Square was part of the third wave of city squares, being built in the 1790s. The square was named after the female spirit of America, known as Columbia, who in turn is named after Christopher Columbus.

Columbia Square served as the border to Savannah’s Eastern Commons. The neighborhood was majority Irish and was home to a number of brothels, bars, and taverns. During the Irish Potato Famine, Irish immigrants often boarded up at the Davenport House, which served as a gateway into settling the neighborhood. The area was a popular place to go drinking, and sailors, dockworkers, and laborers would spend their nights out in the Eastern Commons. It was common to see Irish and German immigrants mingling with African slaves and servants.

Irish immigrant William Kehoe built his first house on the east side of the square in 1885. Seven years later, he built a larger house opposite from the first after reaping the profits from his various businesses.

In the 1940s, the movement to modernize Savannah created calls to demolish the city’s historic houses in favor of new developments. Developers saw an opportunity to widen Habersham Street and make way for more traffic, and Columbia Square and the surrounding houses were set to be demolished. Fortunately, the movement gained little traction.

The danger of losing the Davenport House really set Savannah’s preservation movement in motion. The long-abandoned building was condemned, as was a good candidate for demolition. Upon hearing about the plans for demolition, seven local women banded together and bought the house, saving it from becoming a pile of rubble. They soon became the founding members of the Historic Savannah Foundation and went on to save over 1,200 buildings from destruction. At least 400 of those buildings were built before the Civil War, highlighting the historical importance of the preservation movement. The Davenport House was the original headquarters of the foundation until they moved their headquarters to the Abraham Sheftall House, which also sits on Columbia Square.

In the 1970s, a fountain from the Wormsloe Plantation, one of Georgia’s earliest settlements, was moved to the center of Columbia Square.

The Haunted Houses on Columbia Square

The area around Columbia Square is home to three of the city’s most infamous haunted houses. Although Columbia Square itself isn’t haunted (as far as we know), there are enough ghosts within walking distance to justify its status as a haunted hotspot.

The Davenport House sits on the northwest corner of Columbia Square. The large, red brick building was erected in 1820 by Isaiah Davenport to house his large family and several slaves. It later became a boarding house, providing shelter for numerous Irish immigrants. Today, the Davenport House is a museum, but the ghosts from the building’s early days still reside within, including one of the most unique ghosts in Savannah. The spirit of an orange and white tabby cat haunts the halls of the Davenport House, and it’s quite friendly, albeit watchful. It hops from room to room by jumping through the walls, as it keeps an eye on the museum’s guided tours.

The ghost of a young girl is also seen inside the Davenport House. She’s presumably a victim of Yellow Fever and is believed to be a child of the Davenport family or of one of the many families who stayed in the boarding house. She’s often seen standing in the second-story windows or playing alone in the front yard before vanishing into thin air.

The Kehoe House was the second home of Irish immigrant William Kehoe, who became prosperous by operating several foundries around Savannah. The Kehoe family had ten children, and as was the norm at the time, not all of them made it to adulthood. Two of his children died from unknown causes, but their spirits live on in the house. The house is now a hotel, and guests often claim to hear the sound of children playing and seeing residual memories of the Kehoe children living out their short lives around the house.

Adding to the mystery is the building’s short stint as a funeral home. Guests have caught a whiff of strange smells, like the scent of rotting flesh and the smell of old perfume. Some guests also claim to feel the peculiar sensation of being watched, encountering unusually cold spots around the house, and being touched in their sleep.

The 17Hundred90 Inn is a hotel, restaurant, and tavern just one block removed from Columbia Square. The building was built in three stages between 1820 and 1888. At least three ghosts inhabit the building, the most famous being the spirit of Anna, who committed suicide at the hotel sometime in the 1820s. She was set to be the bride in an arranged marriage but fell in love with a sailor instead. When her lover sailed away for the final time, she tossed herself out of the third-story window, though some say that her future groom was the one who pushed her to her death.

Anna is most often encountered in Room 204 and is known to tug at the sheets while guests are asleep or cry in the corner of the room when the lights go out. The ghost of a young boy named Thaddeus is also known to leave pennies around the lobby and kitchen of the building. The spirit of a voodoo witch doctor roams the hotel’s kitchen. They aren’t very friendly and have been seen tossing pots and pans around the kitchen in an angry rage. Many believe this to be a ghost of the Kehoe family servant, still angry at their mistreatment.

Savannah is a paradise for history buffs, and it’s a shame that much of it was nearly lost to modern developers. Those who don’t know their history are doomed to repeat it, so learning about the dark and bloody history of one of the nation’s oldest cities is a valuable experience indeed. Pay a visit to Fort McAllister! The city had a major role in the Civil War, and its forts remained undefeated until they were taken by land. Today, Fort McAllister is haunted by the phantoms of soldiers who lost their lives in battle. The Owens Thomas House and Slave Quarters is home to the oldest urban slave quarters in the country. The house is a great place to see how the extravagant wealth of Savannah was built upon the backs of slaves, who were kept in cramped and decrepit conditions. The house is one of the most paranormally active houses in the city, being home to over a dozen ghosts. River Street is nestled right up against the Savannah River and is home to numerous shops, restaurants, and hotels. Back in the cotton era, the area was a bastion of crime. The buildings that line the street were once used to hold slaves after being displaced from their home. At night, one can see the residual memories of the slaves being transported from the ship and into the alleys and buildings along River Street. Want to see more haunted Savannah? Check out the top ten most haunted spots in the city right here!