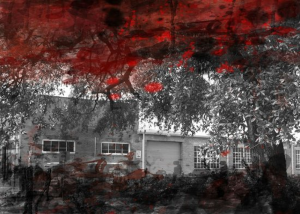 This house is the site where three women were brutally murdered in 1909. The owner of the house was a seventy-year-old woman named Eliza. She was found early in the morning on a cold December day. They had also found her daughter and another woman. There has been a lot of talk about this murder because it was so brutal. The person who killed these women would be pardoned and released after only twelve years in prison. That is why it is believed that the hauntings are occurring. The original house was torn down and it is now a garage, however, the women still make themselves known. It is believed that the women still make themselves known because the man who murdered them did not receive the full punishment. 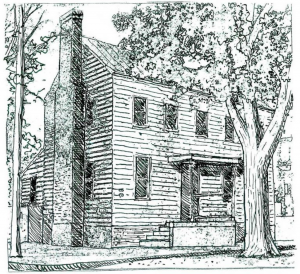 This was known as the Savannah Axe Murders. This was where three women had been brutally beaten and killed on 401 West Perry Street. This happened in downtown Savannah. It would happen in December.

The people believed that it was the African-American culture and community who had committed this crime at first. However, the third victim, Maggie Hunter, revealed the true person behind the attacks. She would succumb to her injuries, however, she was able to tell the police that it was her estranged husband who had done this. His name was J.C. Hunter. He would be sentenced to death only a year after the murders. He would then receive a different sentence one day before his execution date. He would spend his life in prison. However, in 1923, the governor would pardon him and he would be a free man.

It was a cold chilly morning on December tenth when a mother and daughter were discovered by the police. They had been beaten to death in their own home. The third woman was named Maggie Hunter and was found alive at the home. However, she would soon die from her injuries. The police would find the body of the daughter, Carrie Ohlander, in the hallway. They had determined that this young lady was also sexually assaulted before her final breath when her throat was slit. Carrie was only thirty-six years old and was staying with her mother because she was separated from her husband. Her husband would live in Memphis. Carrie would be slightly deaf and that is why it is believed she was attacked first. She was trying to protect her mother.

Eliza, Carrie’s mother, was found with her skull beaten in a back bedroom. She was found sitting in her chair with her glasses at her feet. It is said that you could see the imprint of an ax on her skull.  Eliza was the owner of the home and was seventy years old.

Eliza was from England, however, just before the Civil War had decided to settle down in the peaceful town of Savannah. She settled with her husband R. Gribble. The home had been rented a short time before she was killed.

The third victim, Maggie Hunter, was just thirty-four years old. She had been renting a room in the Gribble House. She would only move in one day before they were all killed. Her husband, J.C. Huner and her were estranged. Maggie had planned on becoming a seamstress and her estranged husband brought over her sewing machine the day before. Maggie had been found at the front door, clinging to dear life. Her throat was slit and her head was also beaten. She would die three days later, however, she would be able to tell authorities who had done this.

The crime would occur and be discovered early in the morning. This meant that it would be able to get into the evening paper that same night. The murders were reported and it would cause a huge stir of the town. There were riots breaking out and fences being torn down. People were bursting into doors as many of the people in the town were looking for the killer. The story would eventually and fairly quickly become a national news story. The day after the murder, 150 black men were in the police station waiting to be examined. There were mobs of men from the prison who were outraged and these black prisoners had feared for their life.

However, delirious and on her deathbed, Maggie Hunter would be the one who told the police who did this. She would be talking to her minister, John, who was sitting beside her. He was the one who knew the killer. She claimed it was her husband. John had notified the police and her estranged husband was taken into custody. He would then have a search of the home done and it would reveal he had bloody clothes and rags in his home. The bloody rag would be stuffed inside of his fireplace and there were clothes covered in the blood throughout the house. Not to mention, he would leave his walking stick behind in the house where the bodies were found. It didn’t. look very good for him. 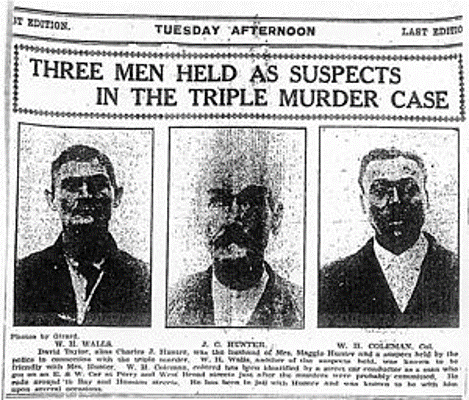 On the 23rd of February, there were three men indicted. The first would be Maggie’s husband, the second Willie Walls, and John Coker. All of the men denied having anything to do with the murders. The only man to have a full trial for the murders was Maggie’s estranged husband and on August 17th, Hunter was convicted for the murder. He would be sentenced to death. He would be hung The following year. However, the day before he was to be executed, he would be baptized in the cell. He would still tell everyone that he is innocent. He had told the governor this and the sentence was changed to life in prison. However, it was in 1923 that he would be pardoned and could walk a free man.

Today you can find the Gribble house is just a warehouse. However, that doesn’t mean that it does not still have its fair share of haunts. It is believed that there are at least twenty if not thirty ghosts that are around. The home is a place where you can tour and use ghost-hunting equipment to take a look for themselves. These people can take tours and learn about the murders and hear from the ghosts themselves.

People who enter the home have heard voices. There are plenty of voices that can be heard with the many ghosts that are there. You can almost always see the shadow of a man running throughout the warehouse. Some people have even taken the tour and walked out with scratches and they do not know where it came from. A woman has appeared in what is believed to be a wedding dress. She is the lady in white and has been seen in just one corner of the warehouse. There is a room that used to house slaves, this is where the most activity occurs. There have been reports of ghosts telling people to get out and they would be touched. Not to mention, some people have even had their hair played with in this room.

These murders are some of the most well-known in the history of the small town. Savannah was once a peaceful place to live, however, after these murders, people would second-guess how nice the place was. With that being said, many people would remain in their homes until someone was indicted for the murders. This small town’s life was changed forever on the morning of December 10th, 1909. This murder is still talked about to this day. It is one of the most infamous murders in the state of Georgia and you can visit the place where it happened.