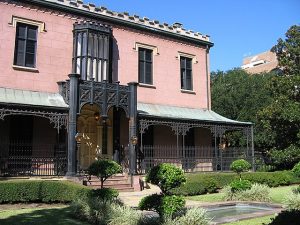 When Charles Green arrived in Savannah from England in the 1830s, he was almost dead broke. The twenty-something year old spent the next 20 years working his way up the shipyards, eventually becoming one of the richest men in Savannah. By 1850, Green was a cotton merchant and shipowner, and was wealthy enough to build one of the city’s most extravagant homes. He had the Green-Meldrim House built in 1850 for his wife, Lucinda. The house became notable for its role in the Civil War. General Sherman used the building as his headquarters while his Union troops occupied the city. Rumor has it that General Sherman chose the house because he knew the Confederates wouldn’t touch it; the house was one of Savannah’s treasures. The house was sold to the Meldrim family in 1892, who later handed it over to St. John’s Episcopal Church. The church still uses the house to this day. Like many houses in Savannah, the Green Meldrim House is haunted. It sits right on Madison Square, an area known for paranormal activity. The infamous Siege of Savannah left thousands of soldiers dead around the site, and rumor has it that there are still bodies buried in the vicinity, including under the Green Meldrim House. But the house also has a few ghosts of its own. The spirits in the building seem to be moved by music. Live instruments cause doors to open and close on their own and strange voices to echo around the house. The ghost of one of Charles Green’s slaves is said to be behind the haunts. She was known for her affinity for live music and would attend the musical events often held in the house.

Charles Green immigrated to the United States from England in 1833. Still in his early twenties, Green was short on cash and hadn’t had much work experience under his belt. Green began working at the docks, learning the ins and outs, gaining work experience on the way. Over the course of twenty years, Green started several businesses and came to own multiple vessels. His most lucrative enterprises were selling cotton and shipping. By 1850, Charles Green became one of Savannah’s wealthiest men.

Green got married in the 1840s, but his wife died of tuberculosis shortly afterward. Around 1850, he remarried, making Lucinda Ireland Hunton his second wife. He promised Lucinda a house, and so had the Green Meldrim House built in 1850. The two had a son, named Edward Moon Green.

Charles Green died in 1881 and was buried in the Laurel Grove Cemetery.

Charles Green had his home built in 1850. The extravagant home cost over $93,000 to build, equivalent to about $3.2 million today. New York architect John S. Norris designed the Green-Meldrim house. The home was originally built for his wife, Lucinda, as a gift. Green meant for the home to be passed down as a family heirloom.

The Green Meldrim House is notable for its ornate Gothic architecture. It’s actually considered one of the best-preserved examples of Gothic Revival architecture in the South. The house is adorned with oriel windows, a spiral staircase with a skylight directly overhead, and black walnut wooden floors. Many of the materials used to build the home were imported from England, which accounted for around $40,000, or more than half, of the home’s total cost.

When General Sherman took the city in 1864, he used the Green Meldrim House as his headquarters. Sherman’s March to the Sea was a military campaign where he and his massive force of Union troops marched from Atlanta to the Georgia coast, taking Confederate posts and freeing slaves along the way. Sherman knew the Green Meldrim House was a famous Savannah landmark, so he captured it and used the building as his base of operations. Being that the house was one of the most prized mansions in Savannah, the Confederates wouldn’t dare touch it for fear of causing damage, even if it meant giving up the opportunity to capture General Sherman.

When Charles Green died in 1881, he passed the deed down to his son, Edward. A year later, he sold the house to Peter Meldrim, a prominent Savannah lawmaker who briefly served as the city’s mayor. Then, in 1943, his daughter, Sophie Meldrim, sold the house to the nearby St. John’s Episcopal Church. The Green Meldrim house has served as the office for the church ever since.

In 1976, the house was designated a National Historic Landmark by the US Department of the Interior.

The American Revolutionary War saw countless battles, and Savannah wasn’t spared from the bloodshed. The Green Meldrim House sits right on Madison Square, and it just so happens that the square was the site of Savannah’s bloodiest revolutionary battle.

The Siege of Savannah took place in 1779, one year after British troops captured the city. A joint French-American force attempted to ambush the British and drive them out of Savannah. The Revolutionary forces were outmanned and outgunned, and sustained heavy losses. In just a few weeks, the Revolutionary Army lost thousands of men.

While holding their line of defenses at what would later become Madison Square, the Revolutionaries dug trenches to bury their dead. The bodies piled up quickly. Many of the men thrown in the pits hadn’t yet died. Oftentimes, they were sick or wounded, but the troops couldn’t differentiate between dead and live soldiers in the heat of battle. As a result, many were buried alive in the chaos.

Today the area around Madison Square seems pretty quaint. Still, the thousands of bodies directly below the square say otherwise. Legends say that bodies were found while digging the foundations for nearby buildings, including under the Green Meldrim House. Ghosts and spirits plague Madison Square, and witnesses claim to see strange shadows, lights in the sky, and hear disembodies voices around the immediate area.

Ghosts of the Green Meldrim House

While Madison Square and the immediate vicinity is haunted by the soldiers who died during the Siege of Savannah, the Green Meldrim House also has its own spirits to add to the spooky equation. The house is haunted by the ghost of one of Charles Green’s slaves.

The ghost is a music aficionado. When Green lived in the house, he often held lavish gatherings complete with live music. Rumor has it that one of his slaves would stop what she was doing to watch the band and became known for attending the gatherings. She still haunts the house today.

The ghost comes alive upon hearing the sound of live music. That’s when the haunts begin. Witnesses claim to have seen doors open and close on their own, and hear the sound of disembodies voices, oftentimes humming along with the music. Others say they’ve seen objects float, waving with the rhythm of the music. The strange shenanigans suddenly stop when the music ends, as if her spirit exists within the music.

Savannah is among America’s oldest cities. It’s seen several battles, raging fires, and brutal murders. Today, Savannah is a tourist trap, but its dark past survives within the city’s spiritual presence. Tons of ghosts call Savannah home, and the city’s so haunted that you may not need to go very far to find them. Check out the ghosts of River Street! Today River Street is known for its cafes, hotels, and restaurants, but once upon a time, it was the seediest part of town. Slaves, indentured servants, and criminals called the area home, and it wasn’t uncommon to see someone get crushed under a bale of cotton while working the docks. The ghosts of River Street can still be seen at night, tirelessly loading the ships. The house on 432 Abercorn was the site of a brutal triple murder in the 1960s, where three girls were found dead, and their bodies contorted to form a triangle. It was also the home of an angry father who punished his daughter so harshly that she died of neglect. Fort McAllister is an earthen fort just outside the city limits. The fort was used to defend Savannah from Union battleships, and it stood until General Sherman took the city by land. Today, the ghosts of Confederate soldiers can be seen and heard marching through the halls. Want to escape Savannah? Check out the top ten most haunted spots in Georgia right here!