The Ghosts of River Street 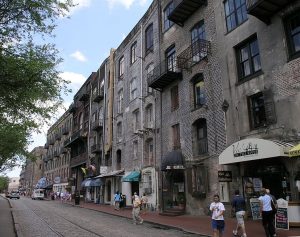 River Street is Savannah’s waterfront, where tourists and locals alike can grab a bite, have a drink, or take home some souvenirs from one of the many gift shops. Only a few hundred years ago, it was the heart of Savannah’s economy during the cotton era. This is where the cotton grown on the Georgia Coast was shipped to various destinations around the world. It was also where African slaves were imported into the city.  Besides being a place of great historical importance, River Street is also very, very haunted. The buildings that line River Street today were once used as warehouses to hold cotton waiting to be exported and slaves who were just imported. Many of the buildings still have the remnants of shackles on the ground floor. Ships were always arriving and departing, and African slaves and indentured servants from Europe were the ones working the docks. It was backbreaking work and often quite dangerous. There was the chance of being worked to death in the hot sun or being crushed under a thousand pounds of merchandise, both of which happened quite often. Tens of thousands of slaves and workers died working the docks of River Street. Thousands died building the docks and warehouses on the waterfront as well. Add in the fact that the bluff where River Street and Downtown Savannah were built upon were once Native burial grounds, and you begin to see why spectres flock to River Street. Many have reported shadow people wandering around at night. The translucent spirits of the slaves and servants working the docks can still be seen loading the boats. Some have heard the moaning and crying of slaves from the alleyways and warehouses where they were once held captive, along with the sounds of rattling chains from the shackles that held them down.

When James Oglethorpe arrived in present-day Savannah in 1733, he noted the large bluff up against the river, along with the surrounding marshes, and figured the landscape would be an excellent place to build a city given the natural defenses. He chose the bluff as a defensive position upon which to begin building a town. Now known as Yamacraw Bluff, the area was where the Yamacraw tribe had already been living for at least a few decades. The Yamacraw chose the area because it was the burial site of the Muscogee tribe, who were part of their ancestral lineage. The Yamacraw knew that living amongst the remains of their ancestors would allow them to draw upon their spiritual energy. Oglethorpe began building Savannah on Yamacraw Bluff, either ignorant or dismissive of the fact that he was building on the Muscogee burial ground. This set the stage for the hauntings on River Street and the spirits that inhabit the city of Savannah altogether.

The fast growth of Savannah in the 18th and 19 centuries necessitated expansion, especially around the riverfront and port. Warehouses were built to accommodate the influx of slaves and crops being shipped in and out of Savannah, as entrepreneurs flocked to the city to take advantage of the economic boom. Slaves and indentured servants primarily built the buildings and warehouses on River Street. Many perished in the hot sun as the backbreaking labor and long hours got the best of them. Those same warehouses later became akin to torture chambers. As more African slaves were imported, they were stuffed into the warehouses and held until they could be sent to slave markets or transported to other regions. Who knows what untold tragedies took place within the warehouses? They were shackled to the walls, and each other, in extremely tight quarters, just as they were on the slave ships that stole them from Africa. The remnants of the shackles that held the slaves captive and chained still remain in some of the buildings on River Street.

As Savannah’s agricultural influence grew, the warehouses were used to store rice and indigo, and later, cotton, as it became the city’s cash crop. Savannah was the largest cotton seaport in the US and the second in the world. At its height, over two million bushels of cotton a year were exported through Savannah. In other words, the merchants and factors who exported the cotton were under enormous pressure to make sure their crop shipped on time. They unloaded the responsibility onto the forced labor at the docks. African slaves and indentured servants from Germany and Ireland were charged with loading the massive amounts of cotton onto the ships. It was backbreaking labor, and one could easily be crushed by a thousand-pound bushel of cotton, and they often were. If they weren’t crushed, they were overworked. Thousands of workers succumbed to the hot southern sun, dying of heat exhaustion. Who knows what happened to the bodies of the many slaves who perished? One would like to think that they were sent back to their families for a proper burial, but the way their masters regarded them, it’s easy to imagine that their corpses were simply tossed into the water, and their peers told to carry on as if nothing happened.

The slaves, servants, and dockworkers who worked and died on River Street are very much alive and well. Their spirits haven’t left River Street, and the dark energy from the tens of thousands who died over the years can still be felt. The Savannah waterfront is a pleasant place to be during the day, but the freaks come out at night!

Those who walk River Street at night have reported some harrowing experiences. Many have caught glimpses of the slaves still hard at work on the docks, still loading the ships with bushels of cotton centuries after they’ve passed. Some of them have fresh wounds from being crushed or injured on the job, yet they continue to work. They’re usually transparent and vanish as quickly as they appear. Although, some tourists have claimed to have encountered ghosts who seemed very real as if they were a flesh and blood human being. They were only distinguishable by their 18th-century clothing and the fact that they vanished into thin air. Others say they’ve been followed down River Street by strange shadow people, especially if they walk through the alleys. They have no distinguishable features except for their humanoid appearance.

The warehouses which once housed slaves are now restaurants, hotels, and shops, but the dark energy of a people who were stolen and forced into a life of servitude can still be felt inside the buildings that line River Street. Many feel a sad feeling upon entering the buildings on River Street. The slaves who were kept in the warehouses were often sold on Factor’s Walk, which runs right behind River Street. Some were also held in the alleys between the two streets. Many report seeing the apparitions of numerous African slaves awaiting their fate inside the warehouses. Others have heard the echoes of their moans and wails coming from the alleyways. The sounds of rattling chains has also been reported by tourists walking River Street in the dead of night.

River Street may be the heart of Savannah, but there’s so much to see! Unlike other southern cities, Savannah is a compact and walkable city, built before cars were the main form of transportation. That means everything you need to see is within walking distance! Factor’s Walk sits just behind River Street, and it’s filled with local restaurants, boutique shops, and cozy cafes. It’s also very haunted. Factor’s Walk is named so for the cotton factors, or merchants, who once lined the streets, looking for entrepreneurs to buy their wares. Slaves were also sold here and were often kept in the alleys between Factor’s Walk and River Street. The moaning and cries of the slaves can still be heard in the alleyways, and strange shadow people have been seen moving around the area. Perhaps they’re the same shadow people we saw on River Street? The Moon River Brewing Company is right on Factor’s Walk, and it’s a great place to eat if you wanna grab a meal in the vicinity of some strange spirits. Many patrons have had ghost pinch their legs while eating dinner. The ghost of Toby haunts the basement of the building, and those who encounter him have reported a severe drop in body temperature and audible hallucinations. The East Bay Inn is a short walk away from River Street. Once a cotton warehouse, the building was renovated into a hotel when the historic district was revitalized. Today, the ghost of Charlie haunts the East Bay Inn. Charlie is known to steal the personal belongings of guests as a prank. Although he’s quite friendly, he’s sent several guests packing. Want to see more of haunted Savannah? Check out the top ten most haunted places in the city right here!