The Ghostly Soldiers at the Old Fort Jackson 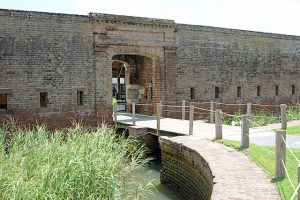 Savannah has seen quite a few wars. The Revolutionary War, the War of 1812, the Civil War, and countless battles with Indigenous tribes have left the city soaked with blood. Luckily for us, Savannah was built in a well-defended harbor, nestled in the Savannah River and surrounded by gator-infested swamps. The Old Fort Jackson was built as an extra measure to defend the city from naval attacks. The fort did its job, seeing numerous battles but only falling once, when General Sherman captured Savannah towards the end of the Civil War. Today, Fort James Jackson hasn’t seen a battle in over 150 years, and now serves as a history museum. Yet, the spirits of the soldiers garrisoned in the fort live on. One soldier in particular still haunts Old Fort Jackson. That would be Private Garrity, who bludgeoned one of his superiors in an attempted murder, then drowned when he tried to escape. While he may sound like a clumsy guy, Garrity’s ghost is not to be underestimated. He’s frightened tourists and staff alike, often appearing at the site of the attempted murder or walking the halls of the fort. He wears a rebel coat, and his apparition is only visible from the waist up. Tourists have reported seeing other soldiers around the fort, seemingly remaining at their posts, even after death.

Before Old Fort Jackson was built, another British battery stood at the site. In 1808, Thomas Jefferson commissioned the construction of a fort at the site. They needed to defend Savannah from the possibility of another British invasion, or even the French, as opportunistic as they were. The fort was named after James Jackson, a British-born, pro-American politician. Jackson fought for the Americans in the revolution, then later served as a Georgia state senator and went on to become the 23rd governor of Georgia. Jackson died just a few years before construction began at his namesake fort.

Construction was completed in 1812, just as another war broke out. President Madison was pressured to declare war while the British continuously stopped and seized American ships in the open ocean. Fort Jackson held both American soldiers and local militias during the war. Though the war resulted in a draw, the soldiers stationed at the fort successfully defended Savannah from British incursions.

Old Fort Jackson saw more action in the Civil War as one of the three forts charged with defending Savannah. Fort Pulaski and Fort McAllister all formed a maritime perimeter around the mouth of the Savannah River. The fort held up for most of the war, deterring naval attacks even as it took heavy fire. In 1862, Fort Jackson took fire from a Union ship commandeered by escaped slave Robert Smalls, who stole a Confederate ship and sailed it into Union hands.

While Old Fort Jackson held up well against maritime attacks, land-based armies proved too much to defend against. General Sherman began his famed March to the Sea in November of 1864, after capturing Atlanta. Sherman then began his march toward the Georgia coast. The General followed a scorched earth policy, where anything even remotely useful to the enemies was to be destroyed. They burned bridges and destroyed excess stockpiles of food and ammo along the way. Sherman’s army also liberated tens of thousands of slaves, who trailed behind his march. Sherman’s men betrayed the freed slaves in a massacre when they tried to cross Ebenezer Creek.

In December of 1864, just one month after taking Atlanta, General Sherman and his army arrived at the coast. Before entering Savannah, the troops surrounded and blockaded the city, forcing the mayor to surrender. The first order of affairs was capturing Fort Jackson. The Confederate soldiers stationed at the fort were forced to flee, leaving fort Jackson abandoned. The Confederates fled across the river to South Carolina, where they regrouped. A few months later, General Sherman marched up to the Carolinas and forced the Confederates to surrender once again.

After the Civil War, the fort was rarely used. The name was changed to Fort Oglethorpe in 1884 but was reverted in 1905 when the fort was decommissioned. The city of Savannah bought Old Fort Jackson in 1924 with plans to turn the fort into a public park. But the fort sat unused until its restoration in the 1970s. Today, the fort is a museum and is open to the public. They conduct Civil War reenactments and daily cannon demonstrations in the summer. Old Fort Jackson was declared a historic landmark in 2000.

The Ghost of Private Garrity

Just before General Sherman captured the fort during the Civil War, an unusual incident took place at Old Fort Jackson. A new recruit named Private Patrick Garrity was charged with guarding the drawbridge. He had a deep hatred for his superior, Lieutenant George Dickerson. Nobody knows why he hated the Lieutenant so much, but many speculate that Dickerson was anti-Irish and anti-Catholic, and mistreated Garrity and his peers.

One night, when Lieutenant Dickerson was returning to the fort, the Private seized the moment, vowing for vengeance. Garrity snuck up behind the Lieutenant, and smashed him on the head with his musket, breaking Dickerson’s skull in four places. Dickerson hit the ground, and Garrity kept bashing his head until his musket broke. When nearby soldiers caught wind of the attack, Garrity dropped his gun and took off toward the Savannah River, attempting to escape. Garrity was too tired to swim and was overtaken by the strong current. He drowned trying to flee.

Dickerson survived the attack. He woke up moments later, unable to remember what had happened. The Lieutenant’s injuries forced him to step down from his post.

Private Garrity’s ghost still roams Old Fort Jackson. He often appears in the same spot where he attacked the Lieutenant. He’s recognizable by his Confederate attire. At first glance, one can be easily fooled into thinking Garrity’s ghost is actually part of the reenactment crew, but the ghost is only visible from the waist up, startling those who encounter him.

The reenactment crew has an annual award for the best actor, and it’s called the Garrity Award. It’s shaped like the musket Garrity used to kill Dickerson. Every year something strange seems to happen to the award. Either it goes missing, or it mysteriously ends up broken. The missing award is usually found near where the incident occurred.

So many soldiers were stationed at Old Fort Jackson throughout the years, and quite a few of them decided to stay behind. Both American and Confederate soldiers have been seen around the fort, still guarding their post as if they’re still on duty. Staff have often encountered them up close, claiming that they feel a deep dread right before they appear. They usually make a brief appearance, then vanish. Quite a few employees have quit on the spot after encountering a ghost. Even those who don’t encounter a ghost directly still feel the haunts. Tourists have reported being trailed by phantom footsteps and a feeling strong sense of being watched upon entering the fort.

Believe it or not, there’s a lot more to Savannah besides Civil War battles and historical architecture. The Savannah Theatre has been bringing fine arts and live performances to the city for over 200 years, and even today, you can still catch a musical at the historic theatre. You also might run into the ghost of a young boy named Ben, who is known to harass and play pranks on unsuspecting audience members. In the 70s and 80s, James Williams often hosted the wildest parties the city’s ever seen at his home in the Mercer House. That was until James shot and killed his lover, Danny Hansford. Now, the Mercer House is full of ghosts, spirits, and a supernatural energy. The ghost of Danny Hansford haunts the house, still angry that Williams was acquitted for the murder. Factor’s Walk is the place to go shopping in Savannah. Cafes, restaurants, and boutiques line the streets, but so do the ghosts of slaves and cotton salesmen. At night, you might see the apparition of a tall, dark, humanoid figure. Some say he resembles Slenderman. Looking for a place to stay in Savannah? Check out the top ten most haunted hotels in the city right here!