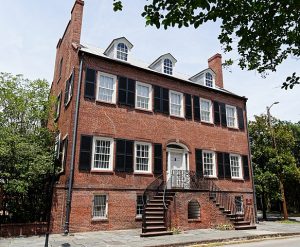 The Davenport House is one of the most important sites in Savannah’s historic district. It was one of the first houses in the city to be restored and at one time served as the headquarters for the Historic Savannah Foundation. The house was built by a mysterious architect named Isaiah Davenport in 1820 to house his large family and numerous slaves. After Davenport’s death, the building served as a boarding house, when his widow rented out rooms to make ends meet. The story of the Davenport House is one of female empowerment. Sarah Davenport had to take charge of her husband’s finances and assets in order to provide for her large family. She took on roles that were out of place for women in the 19th century, like selling property, handling her own finances, and settling debts. Then, in 1955, the rundown house was set to be demolished. A group of seven women banded together and fought to save the Davenport House, creating the Historic Savannah Foundation in the process. Today, the Davenport House is a museum and offers tours and an intriguing recreation of the Yellow Fever epidemic. It’s also quite haunted. Despite the museum’s strict no-pet policy, visitors report seeing the unusual apparition of a tabby cat around the house. It tends to follow the guests around, keeping a watchful eye. The ghost of a young girl also haunts the house, having been seen standing at the windows or playing just outside of the property. Nobody knows who the girl is, though the staff are pretty sure that she was a victim of Yellow Fever. The Davenport family lost quite a few of their children to the disease, and many tenants contracted Yellow Fever while the building was a boarding house.

Isaiah Davenport was a mysterious figure. There are no surviving photos of him and very few records and descriptions of his life. Still, he was known as “Savannah’s Master Builder,” having constructed several buildings and homes around the city. Born in Rhode Island, Davenport was an architect, fire master, alderman, constable, and a member of the city’s Board of Health. He kept a private life despite being an influential person.

Isaiah moved to Savannah in 1808 after spending several years as a carpenter’s apprentice in New Bedford, Massachusetts. He met his wife, Sarah, that same year. He also began building his first house, the Laura Cottage on East State Street. He later got to Martello Tower on Tybee Island, but that was later destroyed by the British during the War of 1812.

In 1820, Isaiah got to work on building the Davenport House. Though he was from New England, Isaiah incorporated Georgia-inspired architecture into the Federal-style mansion. Other architects of the time revered Davenport for his work, and there was no other builder who could match his skill set. At the time, many considered the Davenport House to be the epitome of southern architecture.

The city contracted Davenport to build temporary shelters after the Great Savannah Fire in 1820. The local government chose Davenport for his superior craftsmanship and attention to detail. He was also a trusted member of the community, being an alderman in Savannah from 1817 to 1822, then serving as one of the city’s fire masters.

In 1827, Isaiah Davenport died from Yellow Fever at age 43. He was initially buried at the Colonial Park Cemetery and was later exhumed and moved to the Laurel Grove Cemetery.

Sarah Davenport and the Boarding House

Isaiah left behind a wife and several children. The couple initially had ten children, but only six were still alive by the time Isaiah died. Now a widow, Sarah was charged with taking care of six children, several unfinished construction projects, unpaid debts, and numerous properties that had to be looked after. Not to mention the large home that she was left with. Sarah had to move beyond the status of a typical woman in the 19th century and take on roles that would normally be reserved for men.

Sarah had few options for income. Sewing and teaching weren’t going to pay the bills, so she began renting out rooms at the Davenport House. She rented out her slaves as well. In order to pay off her husband’s debts, she sold off several of his properties and paid the taxes which were owed. She oversaw the construction of Isaiah’s sawmill, which remained on hiatus after her husband’s death. Not only was Sarah able to remain financially stable without her husband, she actually prospered. She bought three more slaves after Isaiah died, indicating her financial success.

While this is definitely a story of female empowerment, Sarah was only able to take on these roles because of her privileged status. Her late husband’s position in society, her wealth, the large property, and the ownership of slaves are what allowed her to achieve prosperity.

Sarah sold the Davenport House in 1840 to the Banyan Family for $8,000. The Banyan Family held onto the house for over a century, finally selling it sometime in the 1940s. The Banyans had abandoned the home long before that, though. In the 1930s, the house had become rundown, and the neighborhood had become seedy. Despite the level of neglect, many still revered the home and recognized it for its architectural beauty. New Deal surveyors listed it in the Historical American Buildings Survey despite it being condemned.

In the 1950s, the Davenport House was set to be demolished. Seven women banded together and petitioned the city to stop the demolition and raised funds to purchase the house. These same women went on to found the Historic Savannah Foundation. They began restoring the Davenport House and used it as the foundation’s headquarters until relocating to York Street.

Ghosts of the Davenport House

There’s no historic home in Savannah without any ghosts! In this department, the Davenport House is pretty tame. Yet, a few spectral guests still call the place home. In addition to the two ghosts which reside in the house, many guests claim to have had a few unexplained paranormal experiences. Phantom footsteps are often heard around the house, as are disembodies voices. Others have claimed to feel unnaturally cold areas inside the house. A gray, hazy mist is also known to appear near the gift shop and those who have seen it say that it takes an unsettling humanoid shape.

The house favorite is definitely the ghost of a cat that has been spotted in the building. Nobody knows who the cat belonged to or when it arrived in the building, but it’s here to stay. The orange and white tabby cat has been known to randomly appear as it follows the museum tour guides, seemingly walking through the walls from one room to the next. It also keeps a watchful eye on the guests, making sure there aren’t any troublemaking stragglers. Some guests are fooled into thinking the cat is just a pet, until it disappears before their very eyes.

The cat seems to have an attraction to small children, seemingly being quite friendly with the kids. Some guests claim that their children often called to an invisible animal and were sometimes seen stroking the air as if they were petting a cat.

The museum staff have researched the girl’s true identity, but they have yet to come to a conclusion. The Davenport family lost four of their children, and countless families came and went during the building’s days as a boarding house. Yellow Fever was rampant at the time, and many speculate that the young girl was a victim of the disease.

There’s no Savannah without ghosts, but some would prefer the lighter side of the haunts. While many places around the city have some gruesome stories to tell, others, like the Davenport House, are pretty tame. Spend a night at the East Bay Inn! This historic hotel was once a cotton warehouse during the Civil War Era and is now home to a friendly ghost named Charlie.  He’s a nice guy, but he just might steal your shoes. Check out the Andrew Low House, once home to businessman and slave trader Andrew Low. The building was also home to Juliette Gordon Low, who founded the Girl’s Scouts. The ghosts at the Andrew Low House are still living their normal everyday lives as if they never passed away. Catch a show at the Savannah Theatre! While the venue is a great place to catch a musical, you might also see the ghost of Betty near the stage, waiting for her chance to bounce back from the dead and fulfill her dream of becoming a Broadway star. Don’t forget to read up on the top ten most haunted spots in Savannah right here!