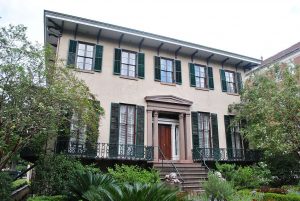 The Andrew Low House sits on 329 Abercorn St, and was built by Scottish immigrant Andrew Low built the house in 1850. Andrew arrived from Scotland in the late 1820s and got to work as an apprentice for his uncle’s cotton factoring business. Eventually, he took over the company, and he became wildly successful. He was wealthy by the 1840s, and he found a wife and began having his home built by 1850. The Andrew Low House was known for the numerous historical figures who were Low’s guests, most notably, English author William Makepeace Thackeray and Confederate general Robert E. Lee. Juliette Gordon Low, the founder of the Girl’s Scouts, was born in the carriage house of the building. The Girl’s Scouts’ first meeting took place in the parlor of the Andrew Low House in 1912. Like many houses in the city of Savannah, the former abode of Andrew Low is haunted by the spirits of its previous residents. The ghost of Andrew Low is said to be seated in a rocking chair in the parlor. The chair was a family heirloom, and it often rocks on its own. Though it’s not known for sure, many believe the so-called rocking chair ghost is Andrew Low enjoying a relaxing evening. The ghost of the butler, Tom, still goes about his duties in the Andrew Low House. Many hear the phantom footsteps as Tom walks about the home, and he often moves things around as he wishes to rearrange the house to match how it looked while he was alive. The ghost of Robert E. Lee has been seen as well, waltzing about the house in a suit and tie. The ghost of Juliette Gordon Low has been caught lying on her deathbed, and the smell of her perfume still fills the air around the house.

Who was Andrew Low?

Andrew Low was born in Scotland in 1812 to a family who ran a modest grocery business. In the late 1820s, he decided to join his uncle in Savannah, who had a cotton factoring business. He spent his time learning the tools of the trade and quickly learned the ins and out of the company. His uncle eventually retired to England, and Andrew took charge of the enterprise. It didn’t take long for Andrew to prosper.

During the Civil War, Andrew Low sided with the Confederates. He previously served in the Armed Forces during the Spanish-American War, so he had some experience. He was a captain for the Confederate Army and was arrested in Boston when the authorities found him out.

He was a wealthy man by the 1840s and married Sarah Cecil Hunter in 1844. They had three children, though the eldest son died in 1848. His wife then died in a miscarriage a year later. In 1852, Andrew married his second wife, Mary Cowper Stiles, and they had four children.

Andrew eventually moved back to Great Britain, settling in England after the Civil War. He still traveled to Savannah every year during the winter. He died in England in 1886 at the age of 74. His family had his corpse sent back to Savannah for the burial. Andrew Low was laid to rest in Laurel Grove Cemetery with his wife and children.

Andrew Low hired New York architect John Norris to have his house built in 1850. Norris designed the home in the Italianate architectural style, with ornate balconies lined with cast-iron railings. The exterior was just as extravagant as the interior. Sarah and his elder son died before the completion of the home, marking a tragic beginning for the Andrew Low House.

Andrew had numerous guests visit him at the home. English author William Makepeace Thackeray spent several years in the US, touring from city to city and making a fool of himself in public taverns. Eventually, he lost his fortune, began writing, and found success.

Andrew Low was a Confederate sympathizer. He served as a captain for the Confederacy in the Civil War, during which he made friends with Robert E. Lee. When Lee visited Savannah after it was taken by General Sherman, he paid Low a visit at his home. Lee and his daughter, Agnes, actually spent the night at the Andrew Low House.

Juliette Gordon Low was born in the carriage house of Andrew Low’s residence. In her 20s, she married Andrew Low’s son. The two never had children, but they had an amazing marriage, traveling the world and living their dreams. That was until Juliette found her husband in bed with another mistress. The two separated and went their own ways.

A few years later, in England, Juliette met Robert Baden-Powell, the founder of the Boy’s Scouts. He convinced her to start a Scouts chapter of her own, called the American GirlsGuides. The first meeting in 1912 consisted of 17 young women, who all gathered in the parlor of the Andrew Low House. They changed the name to the Girl’s Scouts in 1913.

Juliette was diagnosed with cancer in 1923, keeping it a secret while running the Girl’s Scouts. She passed away in 1927 and was buried in Laurel Grove Cemetery while wearing her Girl’s Scouts uniform.

The Ghosts of the Andrew Low House

After all, this is Savannah, and there’s no historical house in the city that doesn’t have a few ghosts in its midst. In addition to the numerous spirits in the house, visitors and staff report feeling icy cold wind chills, strange shadows moving against the walls, and the feeling of being watched.

The infamous Rocking Chair Ghost is said to be the spirit of Andrew Low himself. The rocking chair is situated in the parlor and was a Low family heirloom. The rocking chair is often seen rocking back and forth on its own. Though the ghost remains unseen, many believe that it is actually the spirit of Andrew Low enjoying himself in his former residence. The staff say he seems to enjoy having visitors in his home, just as he did when he was alive.

Juliette Gordon Low is said to still inhabit the home as well. Visitors often see a woman lying on the bed in one of the many bedrooms. Coincidentally, it’s the same bedroom where Juliette died in 1927. They say that it’s her spirit still lying on her deathbed, reliving the final moments of her life. The smell of Juliette’s favorite perfume is said to still linger around the halls of the house. The staff say they’ve never smelled any scent like it, and it’s strongest near her deathbed, indicating a connection to her spirit.

The spirit of Tom, the loyal butler of the Andrew Low House, still does his job from the afterlife. They say he’s pretty friendly and also happens to be the most encountered spirit in the house, as he’s always moving about. Visitors and staff claim to hear the phantom footsteps of the butler walking around the house. He tends to move things around when nobody’s looking. Apparently, he’s dissatisfied with the current layout of the house and seeks to rearrange things to their previous location, to where things were when he was alive. Tom’s actual ghost is rarely seen. Those who have seen his apparition claim that he’s an older gentleman dressed in period clothing and is usually seen standing at the top of the staircase.

The long and bloody history of Savannah left behind hoards of ghosts and spirits. Some are friendly, others not so much. While the ghosts of the Andrew Low House are on the friendly side, many of the other ghosts around the city are spooky or outright hostile. River Street is a great place to go shopping during the day, but watch out late at night. Many have seen the ghosts of slave workers loading the ships with cotton, and the moaning of the slaves who had just been taken from Africa can be heard in the alleyways and warehouses. Some have even been chased down the street by mysterious shadow people. A few houses down from the Andrew Low House is 12 West Oglethorpe, also the childhood home of Juliette Gordon Low. The spirits as 12 West Oglethorpe have caused passing tourists to experience symptoms of Yellow Fever, which subside as they move away from the building. Wright Square is right around the corner from the Andrew Low House and was the sight of a brutal murder when two Irish workers strangled their evil boss to death. Wright Square was also where Tomochichi, the chief of the Yamacraw tribe, was buried by James Oglethorpe. He tends to appear to passersby, still angry at the desecration of his burial site after a railroad tycoon destroyed his monument. Looking for a place to stay in Savannah? Check out the top ten most haunted hotels in the city right here!