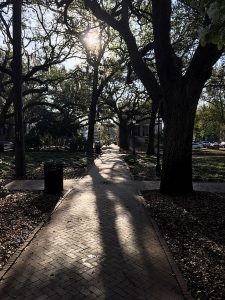 Why is Savannah one of America’s haunted cities? Is it because of its history? The wars? Slavery? Bloodshed? Could it be because the city was built on long-forgotten graveyards? Yeah, you heard that right. According to historians, Savannah might as well be one giant cemetery. If you’re in a building in Savannah, especially in the historic district, then your probably standing on a burial ground. While many have been forgotten and have since been built over, others are marked with a simple headstone or sign. Many of them were burial mounds for slaves. Two of Savannah’s Negro Burial Mounds were paved over and turned into town squares, then renamed after two Confederates. There are also countless Native American burial sites around the city. The most well-known is the Yamacraw Bluff, on which most of the historic district is built upon. The bluff was the burial site of the Yamacraw, and previously, the Muscogee. There are also two Jewish burial sites in Savannah. One has since been paved over, though it does have a marker. There are also countless other burial sites stemming from wars and disease outbreaks. Many of the forgotten burial sites are associated with paranormal events. Yellow Fever often caused its victims to appear dead before seemingly springing back to life, and wounded soldiers in the Civil War were often thrown into pits with the dead soldiers. This lead to stories of zombies coming back from the dead.

Why are there so many burial sites?

Savannah is an old city. It’s seen countless battles, wars, and epidemics. Being a small city, they didn’t always have a dedicated place to bury the dead, especially for the lower classes. Slaves, the poor, and low-ranking soldiers were buried wherever possible. Houses and buildings were later constructed as the burial grounds were forgotten about. Settlers also disregarded the many Native American burial grounds around the area as the city expanded.

Savannah also allowed loved ones to be buried on the property, so many who couldn’t afford a gravestone were buried in their yards. Many of the older houses and empty lots around Savannah are likely to have a few bodies buried underneath.

The outbreak of Yellow Fever especially created lots of burial sites. While many were buried in unmarked graves at the cemetery, others were buried in secret mass graves around the city. Stories of zombies began to surface as the victims of the disease awoke from a comatose state, believed to have already been dead, and began to crawl from the graves, screaming in agony before dying a painful death.

For most of the city’s history, Black people were buried separately from their White counterparts. This continued from the days of slavery, through Jim Crow, and into the Civil Rights Era. In the 1800s, there were two large Black burial sites in the city; one at Habersham and South Taylor streets, and another on Abercorn and East Gordon streets. Between 1763 and 1851, these Negro Burial Grounds were the only places where Blacks could legally be buried. The city stopped keeping records of the gravesites in 1855. The locations of the graves and who was buried in them were lost over the years

In the 1850s, the two burial sites were paved and turned into town squares. They were renamed after two white slavery supporters named Calhoun and Whitefield. John C. Calhoun was the pioneer of the secession movement, which later resulted in the Civil War. George Whitefield was a slave owner and minister who helped co-found Methodism. He tried to overturn a ban on slavery by the Georgia Trust. Records don’t indicate why these men, in particular, were chosen to be honored, but many say it was a blatant racist insult. In 2020, a movement sprouted in Savannah aiming to rename the parks Sanfoka and Jubilee Squares. You can help by clicking here to sign the petition.

Indigenous peoples inhabited the Georgia coast for thousands of years. The last of them was the Yamacraw tribe, who inhabited the land when James Oglethorpe and the English arrived in 1733. The Yamacraw settled on Yamacraw bluff, a large bank on the Savannah River. The bank was the location of a Muscogee burial ground, and the Yamacraw believed that the bones of their ancestors contained the remnants of their spirit. Shortly after the arrival of the English, the Yamacraw left to join a more prominent tribe. Today, Yamacraw Bluff is wholly contained within downtown and the historic district, putting much of Savannah right on top of a Muscogee burial ground.

The Yamacraw also had two burial grounds for their own tribe. The largest burial site is where the Pirate’s House is now located. After Oglethorpe arrived, he implemented his master plan for the city of Savannah, and the location of the burial site was set to be a botanical garden. The city attempted to grow several different crops, but the one that thrived was the peach tree. It was here where Georgia peaches became world-renowned crops. In 1754, Savannah citizens thought the botanical garden was useless, so a tavern for seamen passing through the city was built on the land. The tavern is now known as the Pirate’s House. The other burial ground has been turned into a parking lot, specifically the parking lot for the Board of Education building near Chippewa Square.

Savannah has two Jewish burial grounds. The first Jews arrived in Savannah in 1733, not too long after Oglethorpe. They settled around Ellis Square and formed the first Jewish congregation in the South. Oglethorpe welcomed the Jewish community, and he set aside a plot of land for their burials. The plot of land was on South Broad Street, just outside of the city limits at the time.

The burial ground was the site of a battle during the Siege of Savannah in the Revolutionary War. French and American troops used the Jewish burial site as a natural bluff to watch the advance of the British troops. The bluff didn’t give them enough cover, and the soldiers were overwhelmed by British gunfire.

Today, the original Jewish burial site is right on Oglethorpe Avenue, between the east and westbound lanes. The area is mostly paved over, but the site is marked by a historical marker.

The second Jewish burial ground was commissioned by King George III and the Sheftall family. The king had given the Sheftall family five acres for a cemetery. Sheftall then claimed that he didn’t want Jews to be buried in his family plot, so he took 1.5 acres of the five given to him by the king and allocated it to the Jewish community as a burial ground. He also founded a Jewish Community Center, which stood next to the family plot. The Sheftall burial ground still exists, but it has been heavily looted and vandalized by graverobbers. There are 40 marked graves in the cemetery, but many more have had their headstones stolen.

Is this why Savannah is so haunted?

The hidden burial grounds scattered throughout the city could be partly responsible for Savannah’s ghostly reputation. Every other building seems to be built on land that contains human remains. Perhaps their spirits are restless, kept busy by the spiritual vibrations in the city.

So, how do you know if your standing on one of Savannah’s forgotten burial grounds? Easy! If you’re in Savannah, then your probably standing over a few bodies. You might feel a strange presence if you’re standing on a particularly large burial site, like Calhoun Square, which is rumored to have over 1,000 corpses buried underneath. Ghosts might even appear in the area. Some of Savannah’s haunted houses, like 432 Abercorn Street, are built on burial grounds. Much of the historic district is built on a Muscogee burial ground as well.

Savannah has a long and rich history. Slavery, the cotton industry, and bloody battles; the city has seen it all. The ghosts and spirits of Savannah’s past are still alive and well. Spend a night at the East Bay Inn! The building was once a warehouse for the city’s many cotton factors, but now it’s a historic hotel inhabited by a friendly ghost named Charlie. Check out the Old Candler Hospital. During the outbreak of Yellow Fever, the halls of the building were stacked with the bodies of the victims. Today, you can see their ghosts wandering about the building. Grab dinner at the Moon River Brewing Company! Today it’s a restaurant, but the building was once a hotel, then a warehouse. The building is one of the most haunted in Savannah, and guests have been harassed by ghosts while having dinner. Before making a trip to Savannah, read up on the top ten most haunted spots in the city!