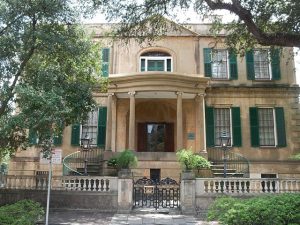 The Owens Thomas House on Oglethorpe Square is a microcosm of the history and core values of Savannah. From the English-inspired architecture to hosting a family of slave traders, nowhere else can you get a better picture of the two realities of wealth and slavery which collided in the Deep South. The beautiful architecture and ornate furnishings contrast sharply with the decrepit and cramped slave quarters, which once held up to 15 people. And staying true to the spirit of Savannah, the house is home to more ghosts per square foot than anywhere else in the city. Several spectres inhabit the home and supernatural experiences are common. Staff and guests have seen phantoms smoking cigarettes, objects moving on their own, and some even claim that the people in the home’s many paintings watch them as they walk by. The ghost of a strange man standing in the parlor is known to watch guests come and go until vanishing into the wall. Another spirit is known to trash the dining room overnight, overturning chairs and leaving the silverware and tablecloths in disarray. The ghost of Margaret Thomas, the last known owner of the house, is often seen walking around the garden tending to her plants, just as she did while alive. Though the rest of the house is undeniably haunted, the former slave quarters seem to be untouched by ghosts. It may be because the ceiling is painted in a color known as Haint Blue, which is meant to ward off evil spirits by mimicking the look of running water. Despite being the part of the house where the worst atrocities were committed, the slave quarters remain unusually peaceful.

History of the Owens Thomas House

Construction on the Owens Thomas House began in 1816. William Jay was the architect and was the mind behind other historic buildings in Savannah, like the Savannah Theatre and the Telfair Mansion. When groundbreaking on the house began, William was still in England and sent the building’s blueprints to local workers before his arrival. The home was designed to mimic the typical architecture of the English town of Bath, William Jay’s hometown.

Upon completion of the house in 1819, it was acquired by banker and cotton salesman Richard Richardson, who had familial ties to William Jay. Richard moved into the home with his wife, six children, and nine slaves. Not long after, the Richardson family was struck by tragedy with the death of Richard’s wife and two of his children. The Great Savannah Fire of 1820 then swept through the city, destroying over 400 buildings, and the city’s economy. Richard had also made an investment in the building of the SS Savannah, which failed to generate revenue. He lost most of his fortune, and the house, as his failed endeavor and the state of the city cost him his livelihood.

The house was repossessed by Richard’s creditors and fell into the hands of Mary Maxwell, who used it as a boarding house. Over the course of eight years, numerous guests came and went, the most famous being Marquis de Lafayette, a French aristocrat and military officer who fought in the Revolutionary War. During Lafayette’s tour of the United States, he stayed in the Owens-Thomas House while in Savannah. He addressed the citizens of Savannah from the second-floor balcony, delivering an inspiring speech to his fans.

George Welshman Owens bought the house in 1830 for $10,000. Owens studied law in Cambridge and opened a practice in Savannah. He served as the city’s mayor and was then elected as a representative for the state of Georgia. After completing his second term, he went back to practicing law in Savannah until he died in 1856. The Owens House was then passed down to Margaret Thomas, Owens’ grandaughter. Margaret lived in the house until she died in 1951. Knowing that she had no children or loved ones to pass down the house to, she willed the house to the Telfair Academy of Arts and Sciences to be used as a museum. The Owens-Thomas House Museum and Slave Quarters opened to the public in 1954.

The oldest intact urban slave quarters in the country are located in the carriage house of the Owens Thomas House. The two-story structure had three rooms on each level. Despite being the part of the house where the most atrocities were committed, it remains unhaunted by spirits. That is due to the Haint Blue paint on the ceiling, which is meant to ward off evil spirits. A common belief is that spirits cannot cross over water, so the Haint Blue paint was meant to mimic water and keep ghosts away from the building. The practice can be seen in several buildings around the Deep South.

Both Richardson and Owens kept slaves. Richardson brought his nine slaves into the house during his short tenure. Owens brought 15 slaves into the house, half of whom were children. Owens also kept nearly 400 men, women, and children on his plantation. After the Civil War, the slave quarters became the servant’s quarters, though it was inhabited by the same people. Life for the servants changed little after emancipation.

Ghosts of the Owens Thomas House

The Owens Thomas House is one of the most active haunted houses in Savannah. Several ghosts live on the property, and guests and staff often experience strange paranormal activity. Many report hearing phantom footsteps, seeing objects move on their own and having the strange feeling that they’re being watched through the many paintings around the house. Cold spots and shadow people are common experiences as well. Many tourists claim to have captured images of ghosts in pictures and videos.

The ghost of Margaret Thomas is known as the “Lady in Gray” due to her gray outfit. She’s usually seen wearing a large hat and a gray shawl. Museum staff say she’s usually spotted at night. She seems to like strolling around the garden, which is where she spent most of her time. They say her deathbed is still in the house, which is why her spirit seems to linger.

One of the more spooky ghosts is that of a disheveled man from the 1830s. He usually hangs out in the parlor, awkwardly watching the guests come and go. He doesn’t seem to move until he decides to walk away and vanish through one of the side walls. Supposedly the wall he vanishes through was once the entrance to a guest room.

The ghost of the phantom smoker is usually seen during late-night tours. He tends to light a cigarette, take a puff, then disappear. On one occasion, a tour guide heard the striking of a match right behind her, then smelled the scent of burning tobacco. When she turned around, there was nothing there. Members of her tour claim to have seen the flame from a match, and a single puff of smoke appears right behind her.

An especially boisterous spirit inhabits the dining room. The museum staff are charged with rearranging and organizing the dining room table every night before closing. But sometimes, the staff will find that someone, or something, trashes the dining room overnight. Whereas the dining area is left nice and neat when the staff leave for the night, they sometimes come in the morning and find the chairs pulled out and overturned, the silverware scattered around the table, and the tablecloths pulled in every direction. They describe it as if someone had a large meal and didn’t clean up after themselves, except there’s never any food residue, because…well, ghosts don’t need food.

Jim Williams, the famous Savannah preservationist, and the man who murdered his lover in the Mercer House, has had a few paranormal encounters in the Owens Thomas House. His two friends rented a room on the second floor sometime in the 1960s, and the three were having a drink in the front room of the house. A strange man wearing a riding coat suddenly appeared in the back room of the house. He seemed frustrated as if he were waiting on something. He walked through the couch and passed right in front of Williams, and passed closed enough for Williams to see the sweat on the ghost’s forehead. He then disappeared. A week later, Williams’ friend encountered the spirit once again, prompting him to leave the house and rent a room somewhere else. Strangely enough, no one else has encountered the man in the riding coat.

The Owens Thomas House sits right on Abercorn Street, which is home to several of Savannah’s most haunted houses. Check out the house on 432 Abercorn Street! The house was the site of a horrific family tragedy, where a wife lost to Yellow Fever led to a murder-suicide involving a father and his daughter. A century later, a gruesome triple murder at the house rocked the city of Savannah. Catch a show at the Lucas Theatre! Located at 32 Abercorn, many claim to hear the applause of a phantom audience in the dead of night. The spirit of a box office worker killed in a drive-by also hangs out near the theatre entrance. The Andrew Low House sits at 329 Abercorn Street and was the site of the first Girl’s Scouts meeting in 1912. The ghost of Andrew Low can be seen sitting in his rocking chair, enjoying the company of the frequent guests. Looking for spooky hotels in Savannah? Check out the top ten most haunted hotels in the city right here!