Murder at the Mercer House 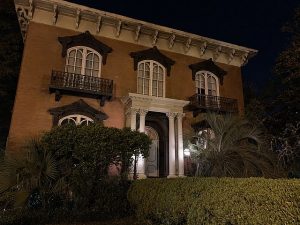 While most of the ghosts in and around Savannah stem from the Civil War Era, the spirits at the Mercer House are recent arrivals to the city. The murder of Danny Hansford in 1981 shocked the community, especially since the assailant, James Williams, was well-known in Savannah for helping to preserve the city’s historic district. Williams and Hansford were lovers in a rocky relationship. After an incredibly heated argument, Williams shot Hansford in the study room of the Mercer House, claiming self-defense. Williams was eventually acquitted, though he died in the house eight months later. The Mercer House has been haunted ever since, with ghost sightings of both Hansford and Williams reported by guests. Hansford is most often seen walking throughout the halls of the house, while Williams is usually seen in the foyer, where his body was found. Some have also reported phantom parties when the house was empty, which are said to be residuals from Williams’ extravagant parties. The ghost of a young boy who was impaled after falling from the roof is also seen around the house. Long before Williams moved in, a young boy named Tommy Downs climbed onto the roof of the Mercer House to watch the birds. He lost his step, fell off the side of the roof, and was impaled on the iron gate below. He’s often seen standing at the windows of the house, while others have relived the residual scene of his death over and over as if it was on an infinite loop.

General Mercer and the Civil War

Well-known houses around Savannah, and to a greater extent, the South, are named after the first family that lived in them, usually a family of prominence. This should apply to the Mercer House as well, but nobody with the name Mercer ever lived in the house. The Mercer House was originally built for General Hugh Mercer, but the construction was halted due to the outbreak of the Civil War. General Mercer went to fight for the Confederacy and was briefly imprisoned after being captured, along with other prominent Confederate leaders. Upon his release, he returned to Savannah but didn’t return to the Mercer House.

General Mercer sold the unfinished structure to John Wilder, who completed the house in 1868.

The Death of Tommy Downs

In 1969, a young boy named Tommy Downs wandered into the Mercer House. Like many of the buildings in Savannah’s historic district, the house was abandoned at the time. Tommy explored the building, eventually making it onto the roof. He was an avid bird chaser, and he probably climbed onto the roof to catch pigeons. Unfortunately, Tommy slipped and fell from the roof. He was impaled by the spikes on the iron gate surrounding the house, the spikes piercing his head and body.

Try as they could, the paramedics couldn’t save him. They cut through the spikes in an attempt to free Tommy’s body from the gate. He died on the scene. Two of the spikes are still broken to this day.

The Murder of Danny Hansford

Jimmy Williams bought the house in 1969 and restored it over the course of two years. Williams was one of the city’s earliest and most prominent preservationists, having restored over 50 homes around Savannah. After restoring the house, he decided to make it his home. He ran his antique restoration business from a small building right behind the Mercer House.

Williams was well-known around town and would often throw big parties. The parties at the Mercer House were like a who’s-who of Savannah, and some of the city’s most prominent people were usually in attendance. It was at one of these parties where Williams met Danny Hansford. The two began a heated relationship shortly afterward.

Danny and Jimmy became lovers, but their relationship was rocky. Danny was a sex worker and had a dark past. The two often argued, and their relationship came to a crux when the couple got into an especially vicious argument in 1981.

Williams and Hansford had been arguing all day, and after the two separated in an attempt to cool down, Hansford knocked over the 18th century English grandfather clock in the foyer. He then stormed into the study, where Williams was reading, and pulled a gun on Williams. Hansford pulled the trigger, but the gun jammed. Williams then pulled out his own firearm and shot Hansford, who died on the scene.

Williams called the police thirty minutes after the murder, leading the police to believe that Williams tampered with the scene to back up his claims of self-defense. Williams was charged with murder, and his case went to trial four times before he was eventually acquitted in 1989, eight years after being convicted.

James Williams died in his home eight months later due to pneumonia and heart failure.

The murder was portrayed in John Berendt’s 1994 book, Midnight in the Garden of Good and Evil. The book was adapted into a movie in 1997, which was directed by Clint Eastwood.

The Ghosts of the Mercer House

James Williams claimed that Danny Hansford’s ghost haunted the Mercer House after the murder. Hansford’s ghost was reportedly angry, vowing to get revenge. Even more so considering that Williams was acquitted, leaving nobody responsible for the murder. Williams was so haunted by Hansford’s ghost that he reached out to a voodoo practitioner for help, hoping to exorcise the ghost. The exorcism didn’t work, as Williams claimed the hauntings continued. Many believe that Danny’s spirit was responsible for the death of James Williams. Ironically, Williams’ body was found in the foyer near the study, where he shot Hansford to death.

Danny Hansford still haunts the Mercer house to this day. Guests say they feel his spirit upon entry, angry at the lack of accountability for his murder. Many also report the feeling of being watched. His apparition usually appears in the study where he died, though he’s sometimes seen walking the halls of the house. The sound of phantom footsteps and disembodied voices are associated with his appearance.

James Williams haunts the house as well. His apparition is often seen in the foyer or the study, where his body was found. Guests also claim to have leftover memories of Williams’ wild parties. His Christmas parties were especially wild. Williams threw his last Christmas party in 1989 after his acquittal. Yet, a few months after his death, neighbors reported that the parties continued, even though the house was empty. They claim to have heard live music and saw people dancing through the windows, but they found the house empty upon taking a closer look. They say that if you pass by the Mercer House during the holidays, you’ll catch the residual memories of a legendary Williams Christmas party.

The ghost of Tommy Downs is also seen in the Mercer House. Many report seeing a young boy standing on the roof or on the balcony. Many passersby have also seen him standing at the windows. Tourists who pass by and take photos have caught images of Tommy in the windows or standing near the house. Some even claim to see the memory of Tommy falling from the roof to his death. The scenes of Tommy getting impaled on the spikes of the iron gate plays over and over in their head, like a video put on repeat.

The Mercer House is now a museum, run by Dorothy Kingery, John Williams’ sister. She’s not keen on the hauntings of the Mercer House and supposedly keeps her lips tight about the murder and any alleged ghosts on the property. She claims to have never seen or experienced any paranormal occurrences in the house. Unsurprisingly, she’s not a fan of Berendt’s book either.

Savannah’s got a lot to offer, and as one of the most haunted towns east of the Mississippi, it’s a ghost hunter’s paradise. Check out the house at 432 Abercorn Street. Easily one of the most haunted houses in Savannah, 432 Abercorn was the sight of a familial tragedy, where a father’s cruel punishment caused the death of his daughter. He eventually killed himself out of guilt,  after being relentlessly tormented by his daughter’s ghost. Fifty years later, a gruesome triple murder occurred at the house. Spend a night at the East Bay Inn! The hotel was recently renovated when Savannah’s crumbling historic district was revived in the 70s and 80s. Charlie is a friendly ghost who inhabits the hotel, and while he might be nice, he’s quite mischievous. He’s been known to steal the guests’ personal belongings. Make a visit to Oatland Island. The island archipelago was the sight of horrifying human experiments, where subjects were infected with diseases like syphilis by the CDC, so the effect on the body could be observed. Today, all sorts of strange phenomena have been reported on the island, including ghosts and strange swamp lights. If you’re feeling adventurous, check out the top ten most haunted places in Georgia right here!