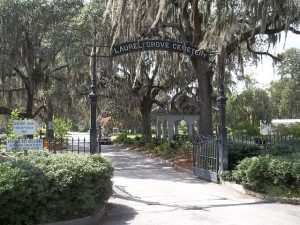 In 1853, Colonial Park Cemetery was officially full. There weren’t any more plots to bury the dead, so a new graveyard was commissioned. That was the Laurel Grove Cemetery in Midtown Savannah. Laurel Grove is among one of the most beautiful cemeteries in the US, and it’s almost entirely Victorian, with most of the graves being filled in the late 19th and early 20th centuries. It has been said to resemble famous Victorian-era graveyards like Greenwood in New York and Père Lachaise in Paris. The Laurel Grove Cemetery is segregated; Blacks are buried in the southern end, and Whites have the north end. There’s also a Confederate section with a memorial for the Battle of Gettysburg. Over 1,500 soldiers are said to be buried there. The graveyard’s most famous corpses are Girl Scouts Founder Juliette Low and the author of Jingle Bells, James Pierpont. Like many other cemeteries and burial sites around Savannah, the Laurel Grove Cemetery is haunted. Phantom footsteps are common around the cemetery, and some have seen hands reach out from behind gravestones. Some visitors claim to have seen a mysterious woman dressed in a wedding gown vanish into thin air. There’s also one ghost story dating back to the 1850s when a trolley would pass through the area. Those who rode the trolley past the cemetery would always hear the sound of a child crying, even when there were no children present. The workers on the trolley claim to have heard the sound every day for years on end.

History of the Laurel Grove Cemetery

City planners in Savannah were planning the Laurel Grove Cemetery since 1818 but never got around to laying out the grounds since it wasn’t necessary at the time. It wasn’t until the Colonial Park Cemetery was full that the need for another city cemetery spurred the establishment of Laurel Grove.

Before being turned into a graveyard, the land where Laurel Grove now sits was a rice field. At the time, people believed the miasma theory of disease, where the spread of disease was attributed to bad air. Both rice fields and cemeteries were thought to be sources of miasma. The large number of rice fields in Savannah was considered detrimental for the community, so rice fields began being paved over. For further protection, cemeteries and gravesites were moved to locations further outside the city limits. The rice field that would later become Laurel Grove was also filled in, and it was turned into a cemetery, as it stood far from the city center at the time.

Laurel Grove became Savannah’s main burial site. Despite the miasma theory, the cemetery was built with public spaces for picnics, as the miasma was thought not to affect recreational visitors. Though many prominent families buried their dead here, Savannah’s wealthiest residents still opted to bury their dead in the much more expensive Bonaventure Cemetery.

Laurel Grove is a segregated cemetery. Laurel Grove South was reserved for slaves and Free Blacks from Savannah and the Georgia coast. Laurel Grove North was for Whites and is also home to a small Jewish section and graves for Confederate soldiers.

Before Laurel Grove, many of Savannah’s Black and enslaved peoples were buried in the Old Negro Cemeteries, which are now occupied by Whitefield and Calhoun Squares. After Laurel Grove opened, many of the graves were dug up and moved, though there are still human remains at the original burial grounds. At the Old Negro Cemetery, Blacks were buried using African traditions, where the dead were buried with symbolic items. Their personal belongings were often placed on top of their graves. After being moved to Laurel Grove South, their graves took on more European traditions, as the cemetery discouraged such practices.

Laurel Grove South is the resting place of many prominent members of Savannah’s Civil Rights movement, like Wesley Wallace Law, who helped desegregate schools in Savannah.

Laurel Grove North was reserved solely for Savannah’s White residents. The cemetery filled up fast; where Laurel Grove South still had plots available well into the 19th century, Laurel Grove North had already used up all of its gravesites in the mid-1800s. This makes the cemetery one of the most uniquely Victorian cemeteries in the country. The headstones are often ornate and extravagant, with obelisks and crosses as common grave markers.

Laurel Grove North is crisscrossed with walkways and paths, as well as open spaces for the public to enjoy. Many of Savannah’s wealthiest and most influential people were buried here, including many of the city’s mayors. The Silence Memorial is a large statue dedicated to the Confederate deaths in the Battle of Gettysburg. Over 1,500 Confederate soldiers are buried in the cemetery’s Confederate section. A small area for Jewish graves exists in Laurel Grove as well.

Haunts of the Laurel Grove Cemetery

Ghost stories from the Laurel Grove Cemetery go all the way back to the beginning of the graveyard. In the 1850s, just after the cemetery was established, a trolley ran through the area and passed right by the graveyard. Every day, those riding the trolley claimed to hear the sound of a child crying as they passed by Laurel Grove. They never saw the child, but they always heard the crying, no matter the time of day or how many times they passed by the cemetery. The trolley workers claim the crying went on for years on end. Strangely enough, they claim that only riders on trolley car #28 could hear the cries. The crying has long since stopped, but the mystery has yet to be solved.

Those visiting the Laurel Grove Cemetery today are in for a spooky surprise. While the beautifully ornate headstones and the Spanish Moss hanging from the Oak trees might entice you to take a stroll, the ghosts and spirits that call Laurel Grove home will send you packing. A beautiful woman in a wedding dress has been spotted multiple times in different areas of the graveyard. Nobody knows who she is, perhaps a runaway bride. Most people don’t notice she’s a ghost until she mysteriously vanishes behind a tree or headstone. She appears most often during the daytime, though she’s been seen at night as well.

Some of the ghosts at Laurel Grove prefer to remain unseen. Visitors have reported the sound of heavy footsteps around the cemetery when nobody was around. The phantom footsteps usually move in sync with their target and seem to trail right behind them. Many visitors to the cemetery have felt the sensation of being followed around the graveyard, only to turn around and see no one there. Some also report seeing disembodied hands reach out from behind the gravestones. They tend to slowly reach toward people standing nearby when they’re not paying attention, then quickly retreat behind the headstone when noticed. Nobody knows whether or not the hands are attached to a body, but they seem to be free-floating.

Locals familiar with the area and the cemetery say that Voodoo practitioners and witches use the Laurel Grove Cemetery to perform witchcraft at night. A few people have stumbled upon the rituals, but since the cemetery is closed at night, these claims can be hard to verify.

Savannah is as beautiful as it is haunted. Many of its haunted houses also sport beautiful architecture. Look no further than the Mercer House! The beautiful home in Savannah’s historic district is now a museum, but it was once home to James Williams, one of the city’s earliest preservationists. Williams shot his lover, Danny Hansford, inside the home in 1981. The house has been haunted ever since. Stop by the house on 432 Abercorn St! The house has a horrible curse stemming from a heartbreaking family tragedy. A gruesome triple murder also took place at the house in the 1960s, and the murder remains unsolved to this day. The beautiful Kehoe House is one of the most luxurious houses in the city. The house was home to the Kehoe family and their ten children before later becoming a funeral home. The ghosts of children are commonly seen around the Kehoe House. Still looking for an adventure? Check out the top ten most haunted places in Savannah!