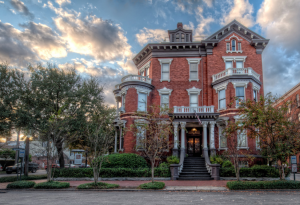 Savannah is known for its beautiful architectural aspects. From the beautiful buildings to the beautiful sculptures. The Kehoe House is no different. It is one of the most luxurious historic buildings in the city. It was built back in 1892  and it was the private housing of Annie and William Kehoe and their ten children. Plus, this house was a funeral home for the majority of the twentieth century. This only adds to the mysterious and dark side.

It was in 1942 that William Kehoe had immigrated to America from a small county known as Wexford. This was located in Ireland. He would move to America with his parents and siblings. There were eight children including himself. The family would eventually settle with other Irish settlers in the Old For District in the city. William would apprentice at a young age at an iron foundry. He would eventually work up to being the foreman. Not long after receiving the foreman, he would purchase the foundry. At this time it was found just east of Broughton Street. It would be after the first World War that he would build a new foundry on the river. This had made him very successful and prominent in Savannah.

It was in 1868 that William had married Anne Flood. The two would spend no time waiting to start a family either. Their first home was small, however, as the foundry had grown, so did their house and family. William liked the historic district in Savannah and purchased the southern portion of the lot. He purchased this for 950 dollars.  That is well over 25,000 dollars today. The Kehoe home would be designed by a man named DeWitt Bruyn. The home would cost a total of 25,000 to complete. It would feature dark red brick and Corinthian columns. It also had bay windows and triple windows. It had a variegated roof and a truncated turret. There were balconies and porches that surrounded the house. All the trim was made of cast iron as well.  It would be completed in 1892. It was at this time that the couple and their ten children would move into the house. 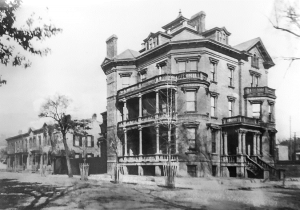 The Legacy Lives On

Eventually, the Kehoe’s had passed away and their heirs would own the home. Their heirs would sell this home and the land in 1930. The thirty years that followed the sale would result in many uses for this home. It would be a funeral parlor, boarding house, and even a normal home. In 1990, football started, Joe Namath would sell the property. It would be renovated for two years and opened once again. However, now it is a historic bed and breakfast. It was sold once again in 2003 and they now own the place to this day. It is still a beautiful bed and breakfast.

The house originally had twelve different rooms. It also had a small townhouse that could be found across the courtyard that would have a bed and two suites. This was an area where many people have gone. Today it is known for being a great place to have a romantic getaway or even a honeymoon. 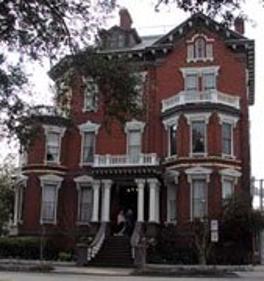 Savannah is known for being one of the most paranormal cities in the United States. It is a hot-spot for many people who are looking to find a place to see ghosts and experience paranormal activity. Many of the buildings in Savannah are known for being haunted, however, the one with the best reputation is the Kehoe House. It is often photographed as well.

There is also a rumor about twins in the Kehoe family. As you know there were ten children. Rumor has it that two of these children had passed away inside the house. There is no evidence of this case, however, it is reportedly told over and over again in local areas.

No matter how much the twins’ story has been debunked, people refuse to let it die. It is said that in this version that the children were stuck in the chimney and could not get out. This story goes that the mother would find two children missing when she had returned home. SHe would look everywhere you could think of but couldn’t find her children. It was a long time until they were found. They would continue to look for a while. However, they would notice that a strange smell was coming from the chimney. They would find their children after discovering this smell. However, again, this has never been proven.

Ghost of Children at the Kehoe House

Many people who have stayed here report some strange events. As stated, children were said to have passed away in the home. Maybe this is why so many people state that children’s ghosts are seen so often.

We know that these children did not die in the chimney or house. However, it could be residual hauntings. This is when sounds or events replay in a certain area. The house has been home to many children, even those in the funeral home before it was a beautiful bed and breakfast. It could be these children leaving their imprints as well.

It is said that these ghosts are not ones to interact with living people. They just seem to be there. You can hear them playing. This is what makes people believe that residual haunting is taking place.

It isn’t just the children that you can experience here. You may also notice the smell of old perfumes. It is said that this scent will waft through bedrooms and hallways at the Kohe House.

Another ghost seems to be very intelligent. They are known as intelligent hauntings because they are able to recognize the living from the dead and they can interact with the living. We know that people at the Kehoe house have interacted with a ghost. This also might explain why some guests feel like someone is touching them while they are fast asleep. Many people have reported paranormal activity while staying at this house. Most of the time the feeling of being watched or touched happens at night while you are sleeping.

Staying at the Kehoe House

If you are looking to find an area that is beautiful and historic, this is the place. However, it is also a place where you need to make sure you are prepared. If you go into this bed and breakfast, be aware of what you may see or feel. This will help you be prepared and get through everything you need to. You are not alone when staying here. To help you learn more about the house, taking a Savannah Ghost Tour might be in your best interest.

The Kehoe House is a beautiful house with a colorful history. There have been so many people in and out of that building that it is hard to keep track of. Whether you believe that the children are that of the twins or residential haunting, it is up to you. If you stay here, you can determine for yourself what happened. However, be aware that you might feel a phantom hand or even smell perfume. This place is known for being luxurious and haunted. With that being said, taking the time to learn about the place before you enter is a must. Be prepared and know what you are getting into. It is a very beautiful and luxurious place if you are not afraid to stay here because of the tall-tales that are told. Who knows, they may not be tall-tales after all.