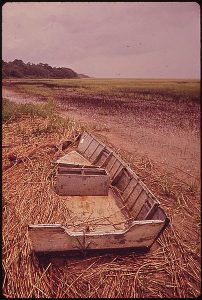 “Bury me in the ocean with my ancestors who jumped from ships, ’cause they knew death was better than bondage.”

Igbo Landing is a well-known site at Dunbar Creek on St. Simons Island, Glynn County, Georgia. It was the backdrop of a mass suicide that took place in 1803 by incarcerated Igbo people.  Slaves who had assumed command of their slave ship and refused to relinquish their liberty and become captives in the United States. The event’s didactic power as a story of defiance towards slavery has iconic importance in African American lore and literary history… and the Hauntings Of the Igbo Landing a lasting scar on our collective memory.

In May 1803, a shipload of bound West Africans, having survived the middle passage – the legendary Atlantic Trade Route – managed to land in Savannah. They were auctioned off at one of the local slave markets. The ship’s manifesto counted hundreds of enslaved passengers included a quantity of Igbo people from what is now Nigeria and Biafra. The Igbo were known by farmers and slavers of the American South for being aggressively self-sufficient, independent, and defiant to chattel slavery. Chattel slavery was a Southern Tradition backed up by a legal framework. It was a social institution that denied human agency of people and legally dehumanized slaves into personal property. Slaves would give birth to slaves; children of slaves were born enslaved, by a legalistic philosophy known as partus sequitur ventrem – That which is brought forth follows the belly. Slaves could be bought and sold at will. It was a perfect way for Slave owners to replenish their stock of workers without the need of investing in new bodies.

In the latter half of the 18th and 19th centuries, Slavery, although in decline and starting to finally lose its appeal, was still active in the civilized world. From the West Coast of Africa – in what is now Biafra, Nigeria, and Cape Verde, to the booming port towns of countless Caribbean Nations, Southern States of the US, and Brazil. Slavery as a whole was a very profitable, and controversial endeavor.

It was also, despite what we are taught, an enterprise fortified by Colonials and Africans. It wasn’t just a curse wrought by the White Man. Slavery was a god awful institute that had been in place well before the Greeks formed into a cohesive governmental unit back in 400BC. Everyone trafficked in slaves; most were either indentured servants conscripted to clear a debt, prisoners of war, our “loot” pillaged from a conquered region.

In the mid 17th century, when the Atlantic Slave route was in full effect – flooding the new world with millions of slaves – Africa was home to one of the greatest financial Empires of that time. Kingdoms upon kingdoms with booming economies and trade routes. Its governors full of riches, stones, oil reserves, and vast lands… and, they were also in control of the Atlantic Slave Route, and its supply lines and supply towns. One of those Towns was Calabria, and from those ports, the Igbo People were sold and traded as commodities to countless traders. A vast majority of them going to the Portuguese colonies in Brazil where they had 1:3 chances of surviving the Ocean Crossing and where they had a life expectancy of 3-5 years. The rest would flood the Caribbean – where harsh weather, flora, fauna, and endemic diseases would render them “inoperable” in less than 5 years.

And only a few would make their way to Louisiana and Georgia… there to be sold as field-hands for hungry farmers.

The oceanic passing was a tortuous affair, one out of three slaves would perish on the route. Sharks schooled around the ships picking off the castoffs and dining on their bloated carcasses. Slaves would betray each other, curing favors of their captives. Sailors and officers would give into their most sadistic intentions. Unhygienic conditions, dehydration, dysentery, and scurvy led to a high mortality rate, on average 15% and up to a third of captives. These ships became known among sailors as ‘Guineamen’, thanks to the fact they hauled up slaves on the Guinea coastline in West Africa. It was into these vessels that slaves were stockpiled, all of them in chains, crunched into small cubby holes and none of them knowing where they were destined- many even feared that they were being taken away to be cannibalized by the white men. Ships could carry as many as 750 slaves.

“I became so sick and low that I was not able to eat, nor had I the least desire to taste anything. I now wished for the last friend, death, to relieve me; but soon, to my grief, two of the white men offered me eatables; and on my refusing to eat, one of them held me fast by the hands and laid me across I think the windlass, and tied my feet, while the other flogged me severely.”

A collection of 75 enslaved Igbo people were purchased by agents of Thomas Spalding and John Couper – US Representatives, Southern Businessmen, and big shots in Washington. Spalding and Couper had bought them to act as forced labor on plantations in St. Simons Island for $100 each.

The shackled subjugated, enslaved and humiliated bodies were mobbed under the floor of a small craft named The Schooner York or The Morovia – sources are a bit sketchy. During the trip, the Igbo slaves mounted a coup and rebelled against their captors; they took control of the ship and drowned their captors. It was a bloody fight that in the process caused the ship to crash into Dunbar Creek.

The Africans went ashore in the distance plantation owners were already mounting a salvage operation. The Coast Guard meanwhile was bounding for their position. For all intents and purposes, they were caught and the noose – that would lead them once more into servitude – was getting tighter around their necks. Desperate, and under the command of a high Igbo chief, they marched in harmony into the creek chanting in the Igbo language:

They accepted the shelter and protection of their god Chukwu and chose death over the alternative. Roswell King, a white supervisor on the nearby Pierce Butler plantation, recorded one of the few modern reports of the episode; as soon as the Igbo crash-landed on St. Simons Island they took to the swamp, committing suicide with their heads held high and not a lick of terror in their faces.

“Heard about the Ibo’s Landing? That’s the place where they bring the Ibos over in a slave ship and when they get here, they ain’t like it and so they all start singing and they march right down in the river to march back to Africa, but they ain’t able to get there. They gets drown.”

Igbo Landing, from a historical point of view, was a “major act of resistance” by the Africans. Along with other acts of rebellion in the region, Igbo Landing – and its folklore status – helped Africans revolt against their captives. Its legend spread like wildfire and became a banner for other revolutions in the region, particularly in the Caribbean.

The Landing has a surviving metaphorical value in African-American folklore and literary history. The insurrection by the Igbo people is considered to be the first “freedom march” in the history of America.

The site was included as a historic place in a 2009 county survey. The locality bears no definite historical marker. A sewage-disposal plant was erected beside the historical site in the 1940s despite local complaints by African Americans. The place is still routinely toured by historians and sightseers. The event has recently been included in the history curriculum of Georgia schools.

Hauntings Of the Igbo Landing

Locals claim that the Igbo Landing and neighboring bogs in Dunbar Creek are inhabited by the ghosts of the dead Igbo slaves.

When night falls, travelers have said they can hear the rattling of chains, the faint break of water parting in two as something slips below its surface, and a creepy song – in a foreign language… “The water brought us, the water will take us away”… swaying the breeze off the coast.

For more tales check out our blog.