The Most Haunted Houses of Savannah: The Hampton Lillibridge House

HOME » BLOG » HAUNTED PLACES » THE MOST HAUNTED HOUSES OF SAVANNAH: THE HAMPTON LILLIBRIDGE HOUSE
Posted by devadmin in Savannah Terrors 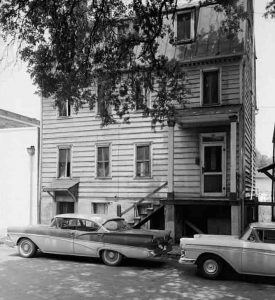 Savannah is haunted. It’s not even a controversial thing to say, NYC is hot in the summer, Boston is cold in the winter, and as sure as Chicago is windy, virtually every street in Savannah is haunted. Some ghosts haunt the places you would expect, like cemeteries or battlegrounds, but then there are the more unusual places: homes, street corners, tunnels.

Here we take a look at one of the more unusual places to be commonly known as home to a ghost: The Hampton Lillibridge House. From the outside, a seemingly normal, quiet private residence. It is in fact one deeply haunted. Local experts rate it as one of the most haunted locations in Savannah and the location for the cities’ only religious exorcism to date—which failed.

Located deep in the historical district a short walk from Oglethorpe Square on East Saint Julian Street, the Hampton Lillibridge House has seen much suffering and death. From the outside, it is a distinctive and elegant house, Two and half stories, with a mansard roof, and wide, shiplap sidings. It was built in 1796 to house its namesake, Hampton Lillibridge, originally from the smallest state, Rhode Island, the design matched his New England origins, even though it was built in the Southern state of Georgia.

His widow sold the house after Hampton Lillibridge died. Its new owner converted it to a boarding house. In its new function, it saw at least one tragedy: a troubled sailor ashore for a short break committed suicide, by hanging himself in one of the guest rooms. This suicide marred the reputation of the boarding house and marked the property as a place of ill repute in general. The boarding house eventually closed for business and for many years no one lived in the house.

In 1963, Jim Williams, the inspiration for the main character in John Berendt’s book Midnight in the Garden of Good and Evil bought the house. The events after that occurred after his purchase of the property, mirror his own life story. The house has become a legendary property in the city, its story changing with each recitation and with the events that keep happening at the house. More What has remained consistent though is the intense level of haunting that has happened at the house.

Ghosts, however, are a consistent part of every version of this tragic story. No wonder, with the high level of human pain that seems to have dogged this dwelling since it’s construction all those years ago.

An esteemed antique dealer and architectural restorationist, Williams took much pleasure in restoring the Lillibridge house to its former splendor. A common telling of the story recounts that in the process of moving the house, the whole house, on blocks and wheels, just a few blocks down the road, part of the roof collapsed, crushing one of Williams’s anonymous laborers who died from his injuries, and was mourned by his family.

The troubles didn’t end with the property’s successful transplantation. Perhaps moving the whole house just aroused more of the dormant pain within.

John Williams’ construction crew however experienced more misfortune almost immediately. They felt chilling, tingling sensations on the backs of their necks. At times, the hauntings resembled the sound of furniture being moved around could be heard from distant rooms. They heard laughter, voices, and footsteps seemingly coming from nowhere. Tools and construction equipment were also subject to uncanny events, almost explicable, but suspicious, nonetheless. Building materials were inexplicably moved or just disappeared completely.

The disturbances caused many members of the crew to quit the ambitious project. Reports of the paranormal incidents soon spread and eventually a local news crew heard about the hauntings and decided to investigate. Late one evening, the news crew, camera at the ready arrived at the house and went inside. They were greeted by a piece of construction material flying at them.

Despite all these issues, A few of the workers on the restoration team remained with William’s project. One worker was rewarded for his commitment to his own personal confrontation with a very aggressive spirit.

The laborer heard a loud, and sudden noise, and went upstairs to the upper stories to investigate what had happened. He didn’t think anyone was up there, so expected to see something fallen to the floor.

When the laborer didn’t return to his workmates for some time they began to grow concerned. A pair went upstairs to see what was delaying him. They found their coworker quickly, by following his terrified whimpers. He was lying face down on the wooden floor, scraping at the bare wood floor with his nails. He was terrified.

After comforting him, and reassuring him, they obviously asked what had happened. The laborer explained that he’d walked into the room looking for the noise and instantly felt as though he’d been thrown into “ice-cold water.” He said he felt like he was losing control over his body. It was almost as if he was possessed.

In his panic, he reflexively dropped to the floor, desperately trying to stop the mysterious force from dragging him towards a chimney shaft that was open, with a precipitous three-story drop below. If the force had succeeded, the man would’ve plunged three stories. The fall likely would’ve killed him.

While telling his colleagues what had happened, the man casually suggested conducting an exorcism. As he uttered the word “exorcism,” a loud female scream echoed through the room all of them heard it, even though they had not seen anyone enter the room.

The Man in Black

As well as hearing voices, the builders working on the restoration also spotted apparitions. One specter seen often was described as a “tall man dressed in black.” The crew reported seeing the apparition watching them from a third-floor window. They said he wore a black suit and a light-colored tie and stood by the window, transfixed by their actions of uprooting his place of residence perhaps?

Others saw the ghosts during the time John Williams owned the house. Some reported seeing a middle-aged man, with gray hair wearing a silver robe. The people who lived next door complained of noises like a party was happening, hearing singing and dancing, despite the house being empty at the time. Some neighbors even saw people dancing on the third floor, while everyone they asked reassured they the place was vacant.

The house had no reported electrical issues, yet lights were seen to flicker on and off, seemingly at random. A woman who lived locally confessed privately to Williams that she had recently been feeling a great fear of a male presence—not a man, but a presence — that she sensed the house.

Williams was not a big believer in the supernatural and rejected the idea that the house was possessed. He did however reveal a telling detail that could be the key to the whole mystery. The renovations had unearthed a mysterious Crypt beneath the new house’s location.

During the restoration of the house at its new location, the crew had to dig up the house’s foundation to seat the upper stories in their new home. In their excavation they unearthed an ancient crypt, below the level of the basement foundations, it most likely dated from a pre-colonial period. To some consulted this indicated that it was of Native American origin, the walls of the crypt were built with rough lime and crushed oyster shells.

Williams was notified of their findings but was apparently not at the property at the time. It’s not clear what happened to the crypt, there was no mention of moving it, or reinternment, in accounts from the Williams period. After its discovery, it seems the crypt was simply buried underneath the house.

Surprisingly, even after hearing about so many incidents of haunted activity in the newly renovated property, Williams moved into the Hampton Lillibridge House.

The spirits, in their own way, immediately welcomed Williams. In the middle of the night, the grating sound of footsteps woke him several times. They weren’t soft footsteps, he described them as sounding like glass being crushed.

Williams also witnessed the appearance of a shadowy figure, who approached him, then suddenly disappeared. Once, Williams, who was probably both intrigued and more than a little annoyed at the constant presence, attempted to pursue one of the spirits. He wrote about chasing it down a hallway until a door abruptly slammed in his face. He attempted to open the door. It was locked.

With the resident spirits affecting his sleep and making life difficult for Williams, he decided to try and do something about the occupations. He went to see an Episcopal bishop from a nearby Church, Reverend Albert Rhett Stewart.

On December 7, 1963, the bishop himself conducted a lengthy exorcism of the restored Hampton Lillibridge House. He conducted a ceremonial blessed of the home. He demanded that the evil spirits leave and rest in peace. His efforts were not in vain. The exorcism succeeded… for less than a week. A few days later, the disturbances resumed.

Not to be dissuaded, Williams next invited a series of paranormal investigators, psychics, and other organizations to have a look at the property and see if they can do anything about the spooky residents. Exorcists including the American Psychical Research Foundation. They all agreed that paranormal activity has occurred within the house, but no one offered any ideas on how to rid the house of its unwanted guests.

The house was listed for sale in 2018. The listing does not mention any ghosts, simply mentioning a  ‘storied past’ the asking price? Only $2,150,000, a small price for the haunted Hampton Lillibridge House.

The house is only a short walk from Oglethorpe Square, this is where our Savannah Terrors tour departs from nightly. Most people associated with the house nowadays don’t mention any hauntings, but even if the ghosts of the house are quiet, we have plenty of other haunted locations to share with you. If you dare!