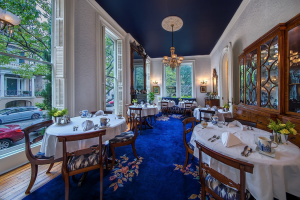 The Hamilton-Turner Inn might be one of the oldest inns in Savannah, Georgia. But it’s still one of the best places to crash when you explore this historic city by the Atlantic Ocean. Before it was a place to stay for many visitors, it was a historic home that would earn the nickname the “Grand Victorian Lady”. However, aside from visiting the beaches nearby or checking out the downtown area, you might even come across some interesting “presences” of another kind along the way. And they may be closer than you think. We’ll be discussing the history of the Hamilton-Turner Inn and the possible stories of paranormal activity that has visitors and residents often asking themselves how a place visited by so many people can be haunted. 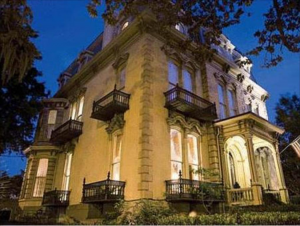 The Hamilton-Turner Inn was built in 1873. It was a home originally constructed for Samuel Pugh Hamilton. Hamilton was a prominent businessman and was also involved with Savannah’s local government as an alderman. He would also be known as the “Lord of Lafayette Square”. Once the mansion was built, the home was a gathering place for many of Savannah’s members of high society. The architecture of the home was said to be ahead of its time by various visitors and passer-byers. As expected, it became a place of revelry as well.

Not to be outdone, the home had then adopted several of the latest technological developments of the late 19th to early 20th century. This was including the use of lightbulbs just a few years after the discovery by Thomas Edison. The home was also a site for some of the latest inventions to be implemented like tin roofs, skylights, and even indoor plumbing. If there was one place to where the things would end up eventually in all homes in America, odds are the Hamilton-Turner Inn had it first. Since we’re also going to be talking about paranormal activities soon, rest assured we can say that not every home in America is haunted (at least we hope yours isn’t).

The Hamilton-Turner Inn also suffered a catastrophic loss in 1898 when a large fire ravaged the much of the city of Savannah. However, the home itself was spared due to the limestone roof that was intact at the time. The following year, Samuel Pugh Hamilton passed away and the home remained in the Hamilton family until 1915. The home was then purchased by Dr. Francis Turner later that year.

Soon after the purchase, Turner converted the residence into a boarding home for guests who were coming from various places. He lived in the home himself along with his family until 1926. Two years later, the home was converted into a home for nurses that worked at the nearby Marine Hospital. However, the Turner Family moved back into the home more than a decade and a half later where they would remain until 1965 when it was sold to the Cathedral of St. John the Baptist. The church was in the process of tearing down the mansion with the intent to build a playground space that would be adjacent to their school. However, those plans were halted after the Historic Savannah Foundation intervened. With the constant changes of ownership since then, the Hamilton-Turner Inn had been converted into apartment buildings. And it attained quite the reputation in both a ghostly and perhaps a scandalous kind of way.

Midnight In The Garden Of Good And Evil

The Hamilton-Turner Inn was mentioned in the 1994 novel entitled “Midnight In The Garden of Good and Evil” by John Berendt. The novel was based on an event in Savannah that involved the murder of a local prostitute. The alleged murder was an antique dealer named James Williams. Williams was known for attending wild parties, including those that were hosted by Joe Odom (who owned and managed the Hamilton-Turner Inn at the time). While the murder did not occur at the house itself, it was mentioned in the book and even made a cameo appearance in the film adaptation later on. Williams was tried for the murder on four separate occasions. After the fourth trial, Williams died in 1990. Odom, who did not have any connection with the murder, died the following year.

But with the stories of a scandal surrounding what culminated into the novel, could it be that the ghosts of these two (and perhaps several others) still be around? What exactly are the paranormal activities that could be going on today that you might be lucky enough to catch if you were to check out Savannah?

With a lot of travelers coming and going along with those who have resided in the home over the near 140 years of the home, there were indeed some stories that can be told about the apparent hauntings and paranormal activities that have taken place (and still might be happening even to this day). One such local story that has been told for decades was that neighbors would gather near the house each night to see the lights come on by themselves. Apparently, these were at times when not a single person would occupy the home.

Yet, there have been other stories that might show that the Hamilton-Turner Inn has those frequent guests who are still around long after they have “departed”. One such spirit that is said to be residing in the house is one that belonged to a child that had died after falling headfirst onto a stairway landing. Another spiritual sighting could be seen by those who were looking outside at the top windows to see a shadow of a man back and forth at a slow pace. Some have seen a similar figure pacing on the roof.

Even today, there have been people who had visited the house and heard the sound of ruffling footsteps in rooms where no one seems to be present. And of course, there have been several stories of people listening to the sound of billiard balls bumping around each other. Could it be that some rounds of “ghost pool” could be played at night? The rumor may have it that the random noises that have been made might be connected to the spirit of the child that had died here long ago.

There was also a report of a phantom gunshot that was heard back in the late 1960s. At the time, no one appeared to have lived in the home. But some have said that just because no one lives there, doesn’t mean anyone would be unable to visit. Strange enough, this is proven to be true since we’re talking about paranormal activities.

Since 1997, the Hamilton-Turner Inn serves as a bed and breakfast style inn where travelers from near and far have stayed. So if you are not in the Savannah area and plan on visiting, at least you have an option of where to stay. And who knows? Maybe a paranormal enthusiast like yourself may not have to go too far in order to encounter some strange occurrences or even some specters of those who have stayed here in the past. As of today, the Historic Savannah Foundation along with the current owners still maintains the building regularly. For as long as its been taken care of, you still have the opportunity to check this place out for its history and possibly call this your “home away from home” while visiting the area.

The Hamilton-Turner Inn was a home that had been at the forefront of some of the world’s greatest inventions for the indoors. But over the years, it had become a place where stories of apparent hauntings would arise due to unfortunate incidents and wild parties connected to some bizarre events. If you are looking for a place that might be a bit out of the way from downtown, then you may want to consider the Hamilton-Turner Inn. If you’re up for the challenge, you may even encounter some strange activity without even leaving the friendly confines of this historic home.