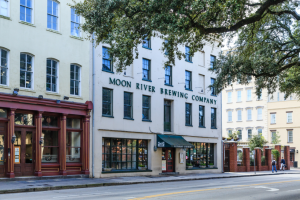 If you are looking for a place to check out all of the boutique shops, restaurants, art galleries, and everything in between in Savannah, Georgia then you may want to check out Factor’s Walk. This is a part of Georgia’s oldest city that you have to see if you happen to find yourself in the area. If you are a local, you should consider yourself lucky. But with all the hustle and bustle that goes on day in and day out, there might be some stories that you may not know about the place. And we’re talking stories of the paranormal activity kind. We’ll dive into those in a second. But for now, we’ll talk about the history of Factor’s Walk and how it became one of Savannah’s most popular spots. 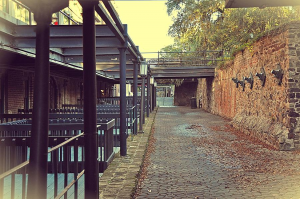 While it’s not specific as to when it was built, Factor’s Walk is said to have been part of Savannah since the 18th century. It’s been said that the first buildings that comprise of Factor’s Walk were completed as early as the 1820s. But markets had been set up long before the buildings were ever erected. It became a marketplace where various cotton goods were sold (and deals were made for bulk selling). However, it was also a place where slaves were bought and sold. Even after the Civil War, times have changed. But what hasn’t changed was the reputation that Factor’s Walk has in being one of the busiest places in the city of Savannah.

It’s interesting how Factor’s walk go its name. As mentioned beforehand, it was a place where cotton goods were bought and sold. And those who set the price for cotton and other exported goods were known as Factors. Despite the Civil War ravaging the country and the Union occupation, Factor’s Walk continued to develop a reputation where most of the city’s business was done. Even today, it’s become home to several hot spots that are guaranteed to be busy every day and every night.

But just because the environment is noisy and bustling, it doesn’t mean that the spirits that are said to loom around here won’t go away. In fact, you’d be quite surprised to see what you may encounter or witness if you somehow end up in this part of the city. But there are some discoveries that you might end up finding on your exploration of Factor’s Walk. 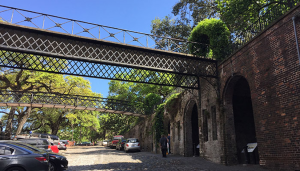 Aside from the various shops and venues that are located on Factor’s Walk, there are some interesting discoveries that you might end up finding. One such thing is the entrance of various tunnels located in the area. What you’ll notice is that the tunnel openings are sealed off. Word has it that these tunnels led to various parts of the city (or underground routes that ended in basements of various buildings).

These tunnels were also running through parts of Bay Street, located near Factor’s Walk. It’s been said that the presence of men, women, and children can be heard through the tunnels and even in the basement of some of these buildings where that were likely connected to them. It could be rumored that these might be the spirits of the slaves that were bought in sold during the years of the pre-Civil War slave trade.

At night, there have been visitors of Factor’s Walk that have discovered a tall and dark shadowy figure that is either moving or standing around. Some visitors have often felt the presence of spirits and possibly hearing faint calls of distress or similar. Since you’ll be walking on cobblestone pathways and streets, don’t be surprised if you end up seeing shadowy figures other than your own and the people who are around you. They may mysteriously appear one second and go away the next. This may depend on how busy Factor’s Walk and the surrounding area can get (especially during the night time hours).

However, not all of these spirits were said to belong to those who were slaves. Over the years, Factor’s Walk has seen its share of misery and tragedy that would eventually end up in death. So it might be likely that the spirits that you may feel present might be among those who have met their untimely ends are looking for some kind of closure.

Among the anecdotes being told, many visitors to Factor’s Walk have reported various occurrences. Most commonly, they would hear the sounds of moaning and groaning (and some have heard a few screams). One person who had visited in the past had remembered feeling something cold on his hand but was venturing alone and not a single person was near him.

The Story Of The Moon River Brewing Company 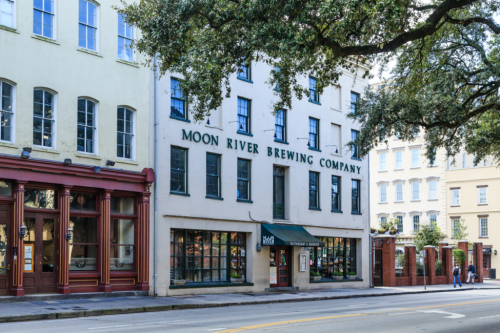 One of the tunnels leads to a place called the Moon River Brewing Company. This was one of the original buildings that were located in and around the Factor’s Walk area. The building was originally built in 1821 as a hotel. It was a gathering place for many of Savannah’s well-to-do. However, that changed when General William Tecumseh Sherman captured the city and was occupied by Union soldiers in 1864. The building was one of several hotels in the city that served as a medical facility for treating Union soldiers. It would also serve as a treatment facility when yellow fever spread across the south on two different occurrences. Unfortunately, there had been several deaths as a result.

While this place is one of the most popular places to eat and drink, there are some spiritual fixtures that are said to be causing a lot of trouble for quite some time. One such spirit is located in the basement where one of the tunnels comes to an end. This spirit who goes by the name of Toby is known for haunting visitors or anyone who might be considering the idea of coming down to the basement area. Another spirit that some people have seen in the past was a woman who is said to be known as “Mrs. Johnson”. This woman was dressed up in old-style clothing (likely 19th century) and was known for staring down patrons from the top of a flight of stairs. Those who have visited the Moon River Brewing Company have reported feeling like they’ve accidentally bumped into somebody only to see no one around.

When Is It Best To Go?

While you are visiting Savannah, the thought of going on a paranormal adventure can be exciting. However, if you are planning on venturing Factor’s Walk, you might be able to witness some of the paranormal activity during the evening hours. You may want to check out the areas where the tunnels are (especially where they are sealed off). While there is no guarantee that you may encounter some paranormal activity, you might want to visit Factor’s Walk anyway even if you feel hungry or in the mood for a drink or two.

Alternatively, you can find some other areas where you might find some spirits or some paranormal activity all throughout the city. If you cannot find anything throughout Factor’s Walk, you can still be able to find them in some of the older houses (most of them hotels) that are located in the downtown part of Savannah.

Factor’s Walk is definitely the place to go to if you ever find yourself in Savannah anytime soon. With so many choices to eat, drink, and shop it will be hard to choose. But if you are searching for a place to find some pretty interesting spiritual activity, then you’ll probably start off with this place and working your way around other areas of interest.