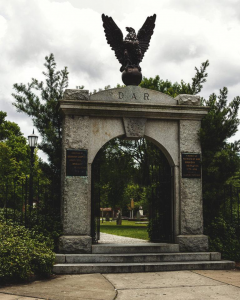 You may know Colonial Park Cemetery as one of the most-aged places in the city. Plus, this is also known as one of the most haunted places in Savannah as well. The cemetery was first established during the year 1750  and it would be the last area for many people to rest. This would include fever victims, violence victims, and Civil War soldiers. There are many different stories and sightings here at the cemetery. We are going to talk about the cemetery so that you do not have any questions when you are done reading. 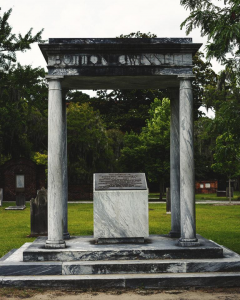 The locals call it the Colonial Cemetery. This cemetery can be found in Savannah and it would become a city park in 896. This was 43 years after all burials had ceased in the cemetery. The cemetery would be established in 1750 and it would be the capital of what was the British Province of Georgia. It was part of the last of the thirteen colonies. In only a few years, the cemetery would expand three times. By 1789, it was six acres. You can find it located at East Oglethorpe Ave and Abercorn Street. The cemetery would be active for just over one hundred years. It has several other names including the Old Cemetery, South Broad Street Cemetery, and many more.

This is the oldest intact cemetery that can be found in Savannah. It is a historic site and many people come and go.  There are many historic markers that you can find next to some of the graves in the cemetery. These historic markers are going to describe important events and people that have helped contribute to the history of the state. Burials stopped in 1853. However, it would have more than 9,000 graves. This included a man, Button Gwinnett, the man who signed the Declaration of Independence. There are many other famous people who are buried at the cemetery as well.

The cemetery would initially be built for the Christ Church Parish. However, in 1789, people of all shapes, sizes, ages, and denominations could be buried here. The burials would end before the Civil War. This means that there are no Confederate soldiers buried in this cemetery.  The cemetery would cease burials in 1853 and it was left to rot. There were several proposals to run streets and even railroads through the land. However, people of the city did not like this and in 1896, a group would help clean up the cemetery and make it beautiful once again. Plus, in 1967, a major restoration project had taken place. It was in 1990 that the city would begin doing a huge preservation project to help maintain this cemetery for generations to come. There were historical researchers that were documenting any and all changes that have taken place during the restoration. They would also be there to update the map and take all the photos.

The information that the historians have are burial records, newspaper articles, city council minutes, probate records, and even early maps. The early maps reveal that the land was in disrepair and needed help. However, they also have any restoration efforts done in the past and changes in ownership and any changes in the landscaping. The park is open to the public and there is much to learn. However, don’t be surprised if you are not alone when you believe that you are.

As you know the cemetery was opened back in 1750. It is the oldest standing burial ground in the city. This is a place where tourists can go and still identify the graves. There are a few burials that occurred before the cemetery opened, however, they are now covered up. These grounds are all built over and covered. This habit of building over the dead has given the city the reputation of the city that lives upon her dead. Keep in mind that there are around ten thousand people buried in this cemetery, however, there are less than one thousand markers. Many people had been buried in a mass grave and some were destroyed. Many people believe that these are the reasons that the site is haunted.

There are always going to be many ghost stories, however, this cemetery is considered to be one of the most haunted places in the city. It isn’t uncommon for people to see shadowy figures moving through the area. There is even sometimes green mist that will float through the air. With all that being said, there are some famous and well-known ghosts that are seen in this area. We are going to take a look.

This is the most famous and well-known ghost story from the cemetery. You can find Rene Rondolier walking through the graves. You may even see him hanging from the hanging tree which is in the back of the cemetery. How do you know that you have seen this ghost? Well, Rene was a tall person. He was almost seven feet tall. It is said that one night Rene had been caught just after he had murdered two young girls. He had murdered them on the cemetery grounds. This called for a mob to form and catch Rene. When he was caught he would be hung in the nearby square. However, not long after his death, you would see his shadowy figure walking the grounds. It is said that the cemetery is the best place for Rene to play.

However, with all this being said, no one can verify it. It isn’t believed to be true. There is no history of two girls being murdered in the cemetery and there is no record of a Rene Rondolier. Some of the tours will tell you though that he lived in a house that you can find on Hampton Lillibridge. It is said during tours that the glass that is found on the brick is to help keep Rene from wandering too far. However, once again, there is no proof.

Savannah has been home to a thriving Voodoo culture for many years. There are many practitioners that practice voodoo in Savannah. Many of them are going to be found outside the city for many reasons. However, the cemetery wasn’t always closed at night and people would go in there in the morning and find voodoo ceremonies performed. There would be items left behind from these ceremonies. These rituals would mean that graves would be dug in order to get human bones. These are true stories and it is believed that some of the people who had been disturbed are now coming back to haunt. 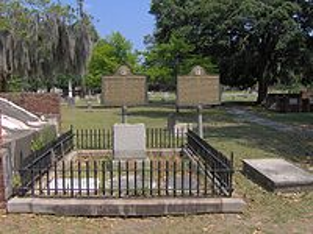 You can find a small park located just south of the cemetery. Today you will find something for children, however, it is believed that this area was a dueling ground when dueling had been legal. It is said that even after the dueling was banned, people would come here to honor their name and uphold their reputation.

Another rumor states that this was a mass grave for people who had died from Yellow Fever. Some tour guides will also tell you this.

The Colonial Park Cemetery has been around for quite some time. It is full of history and with history comes hauntings. Older places are known for hauntings. This cemetery has many unmarked graves and some even crazier stories. Now, we know not all stories are true, however, that is half the fun. You can take the time to visit this area and see for yourself it is truly haunted or just stories. However, it is believed that with the many years of burials and unmarked graves, that you will find something out of the ordinary.